That's a rough translation of where I have been since Wednesday last week – Grootvadersbosch and Boosmansbos. Big Daddy or Groot Vader was the title of a gentleman who owned the Grootvadersbosch area initially in 1723 and was a title handed down over the years until CapeNature took over in 1986. Today Grootvadersbosch Nature Reserve is a 250ha piece of mostly indigenous forest – one of the few remnants in this part of the southern Cape. Boosmansbos is a 14 200 ha Wilderness Area adjacent and to the north of Grootvadersbosch and gets its name from a hermit who lived in the hills. The area is mostly mountain fynbos, encompassing the spine of the Langeberg mountains between Heidelberg and Barrydale.

I had the pleasure of exploring this area with legendary Di Turner's CREW group. Nine of us arrived on Wednesday, set up camp and then set out with field rangers Twakkie and Molly to explore the Grysbok trail, which contours through moist ericaceous fynbos. Several orchids and Erica xx were encountered. While the rest of the group showered and prepared dinner, I headed into the forests down the Melkhoutpad and up the Redwoods Road – where several huge Californian Redwoods can be observed. Olive thrush and Bar-throated apalis were plentiful along the way, with glimpses of Knysna Turaco and Paradise Flycatcher.
The main goal of the trip was to hike the 27 km circular route through the mountains with an overnight stop at the Helderfontein hiking hut. Six of us set off early on Thursday through Saagkuilkloof. Despite numerous stops to examine Ericas, orchids, restios and Proteas along the way, the endless uphill of the 13km route combined with high temperatures had us all worn out by the time we arrived in the misty mountains. However, we were rewarded with a stunning purple and yellow orchid, of species unknown, practically on the doorstep of the hiking hut. Along the river courses, Erica vestita was putting on one of the most prolific flowering displays seen by anyone in the group. 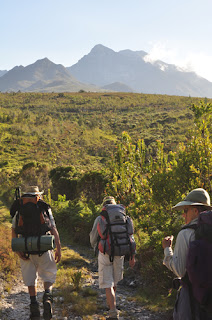 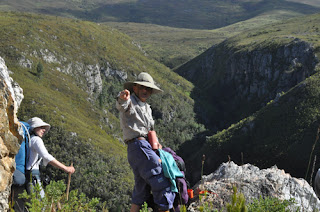 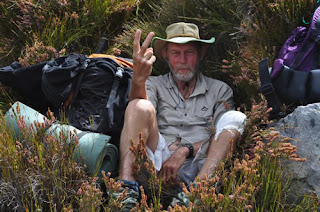 My aged tent survived a small rain shower during the night, so on Friday the main party started the 14km hike back out of the mountains while I added a 4km side hike up to the back of Grootberg (1637m) to collect a few more flower specimens. Of all the pretty flowers I collected, of course getting back to camp in the evening it was the most nondescript member of the Brunia family that turned out to be the exciting 'rare' collection. For me though, ornithologist at heart, flushing a buttonquail – most likely the endangered Hottentot Buttonquail – was the highlight. The beautifully flowering fynbos with views of the Klein Karoo breaking through the cloud from time to time were very captivating. And the mist seemed to breathe life to bizarre rock formations that that turned them into creatures out of a Tolkien novel. 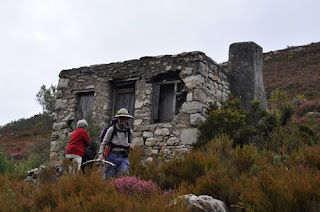 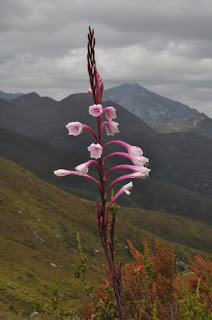 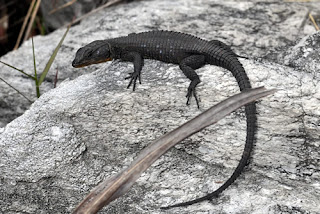 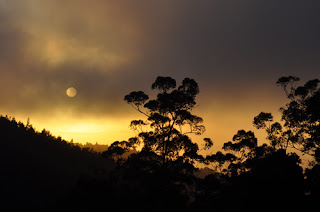 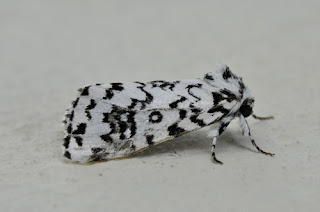 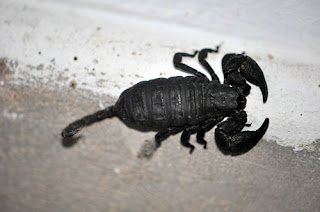 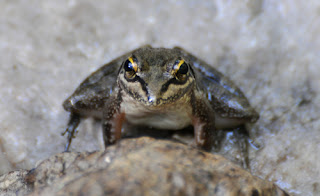 On Saturday the group turned back towards George, and I spent the day exploring further sections of the forest in the hope of a sighting of a Narina Trogon. No luck there – but I was rewarded instead with my first sighting of a Knysna Warbler – an endemic warbler with conservation status 'Vulnerable'. 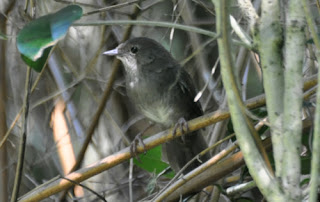 Contact details for the reserve are gvbosch@telkomsa.net, but best to try phone on 028 7222412 or 0861 227 362 8873. Although my trip extended into the weekend, only three of the 10 or so campsites were occupied (we were the only party during the week). Self-catering cottages are also available. This is a bird and plant destination, so while bushbuck, baboons and dassies where seen, together with plenty of sign of bushpig and genet, there is no big game (apart from scarce mountain leopard).
﻿