Freedom Day, 16 December, brought much needed rain to the Klein Karoo and this corner of the Baviaanskloof. However, perhaps not all appreciated this gift from nature. For a week or two prior to the rain a giant Belumbra tree had been flowering in our garden. The masses of cream racemes buzzed with the sound of insects, and these in turn were probably the reason for the daily presence of up to forty Greater-Striped Swallows, 10+ Rock Martins and the odd European and Lesser-Striped Swallows. The swallows would swoop below the arching branches of the Belumbra in an endless aerial ballet. 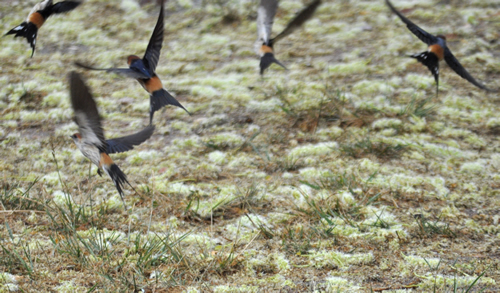 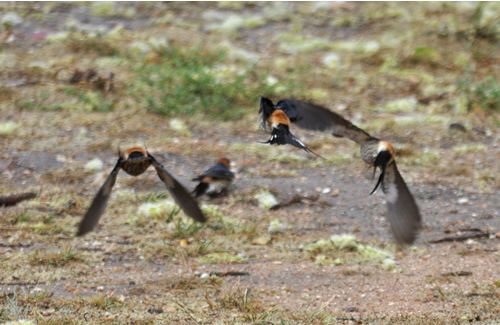 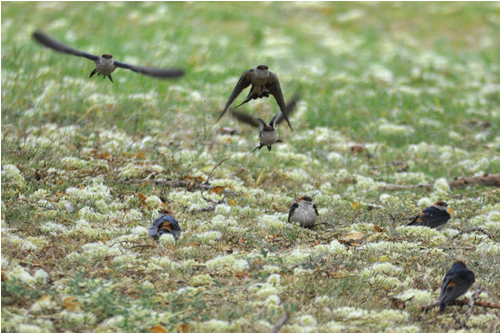 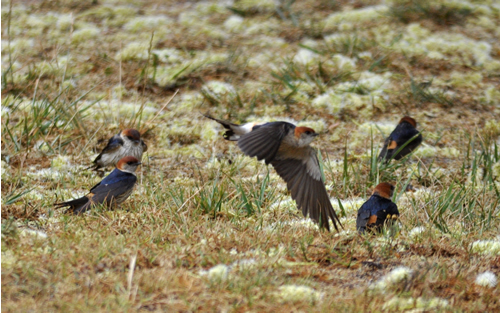 But on the day of the rain I was greeted with an unusual sight – perhaps twenty or more swallows perched on the ground below the tree. This was unusual from several points of view. Although it can be understood that the swallows needed to stop flying to stop their feathers becoming waterlogged, the birds are very clumsy on the ground. As such, if they were attempting to continue their search for insects this would have been difficult. 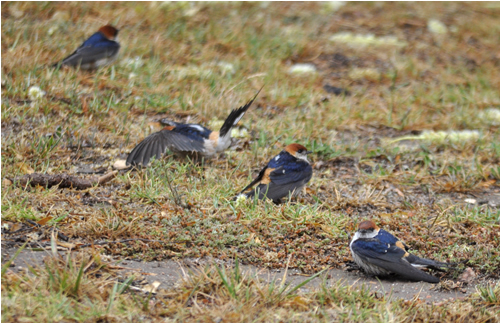 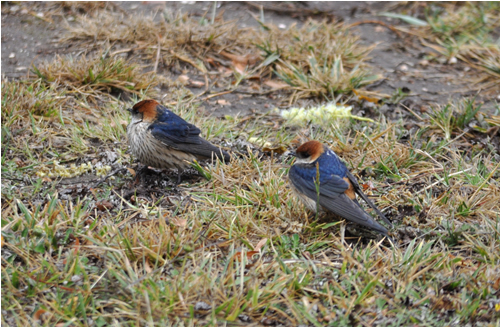 But more strange was that the birds must have been aware of the local cats. At least one low flying swallow had been taken from the air by an acrobatic cat during the previous week. As I watched one cat took two low flying swallows – my instinct to rescue greater than my photographic urge to document this 'natural' drama. A cat with a bell made at least three unsuccessful hunting attempts. And if that wasn't enough the local chickens also objected to these tiny intruders on their patch of ground. 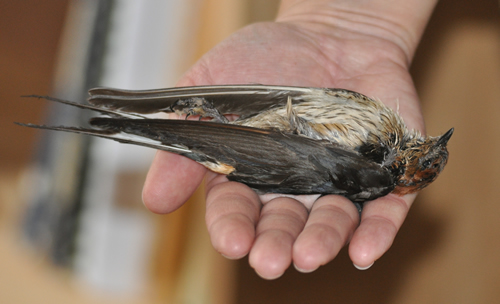 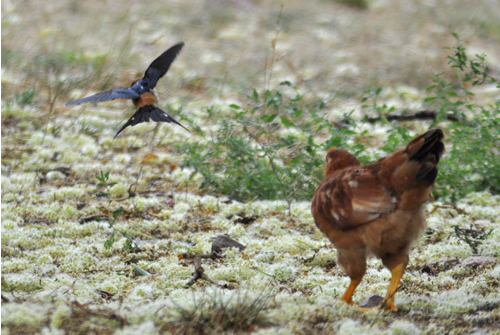 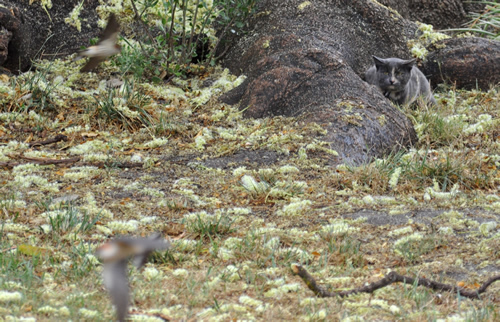 In the meantime a Mouse-coloured Flycatcher continued to hawk for insects. Which made me think – there are two telephone lines running on either side of this tree, why were the birds not perched on that such as one often sees with European Swallows? Or why not simply in the tree itself? Some swallows did fly into the branches from time to time. But for the most part they seemed to prefer to sit on the ground and make short flights to avoid chickens, cats, or passing people. 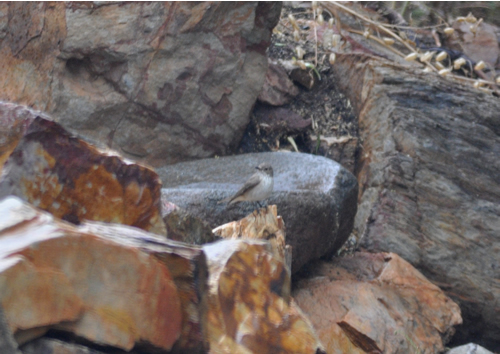 After the rains had passed the swallows resumed to the air. 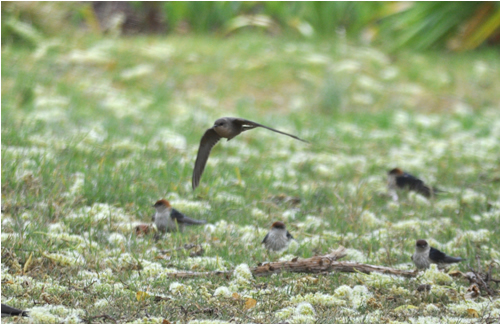 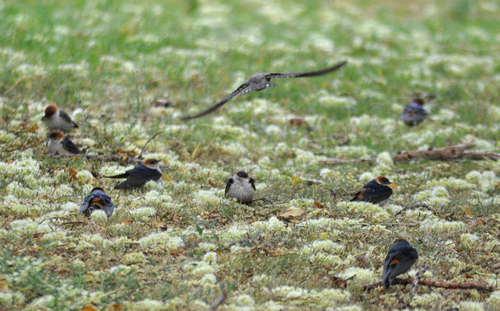 And our first Cape Sugarbird for the summer season paid a visit to the flowering flax plant in our garden. 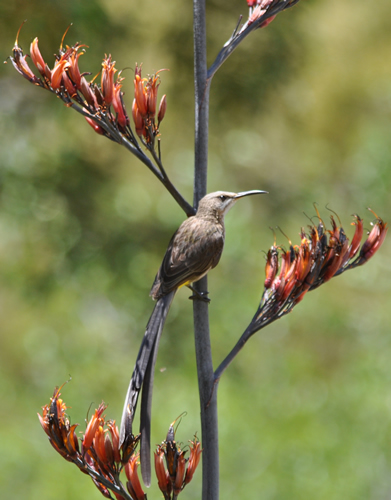 In Search of Cedars

The most famous tree of the Baviaanskloof must surely be the endanged, endemic, Willowmore Cedar. Like most cedars, this tree grows very slowly. It is one of the few representatives of the 'pine' branch of trees in South Africa. It was harvested heavily by the early colonists, and now only exists in the most remote kloofs and canyons. During my first trips through the Baviaanskloof I failed to find one. I saw my first one in a garden at one of the farms, but like seeing a leopard in a zoo, it didn't have the amazing WOW factor of seeing one in the wild.
So I decided to head to one of the most remote gorges of the Baviaanskloof to see if I could find these trees in their natural environment. I had identified a spot on our Slingsby's map of the Baviaanskloof that looked promising, a hidden valley with no road access. It was clear that we would have to embark on a multi-day hike. Backpacks loaded, myself and friend Bob Elliot started a long hike up into the mountains. As it was a sunny (and thankfully breezy) day the views from the spine of the Kouga mountains were spectacular. Our route took us through an area that had been burnt, and colourful flowers distracted us from the hard task of slogging with full packs through the rocky landscape. Occasionally Black Eagles and Rockjumpers would also give us an excuse to lower our loads and admire the landscape long untouched by human hand. 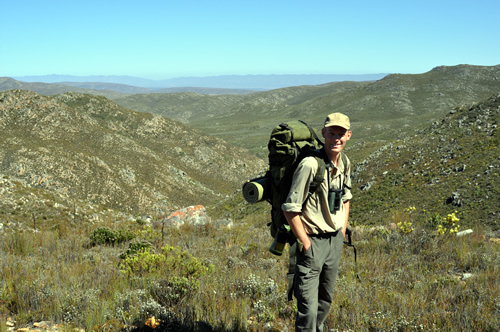 After many hours and water running low, eventually we crested the last hilltop for our first views of the Sipres Valley. It is guarded by a sentinel, who being in benevolent mood, let us pass. 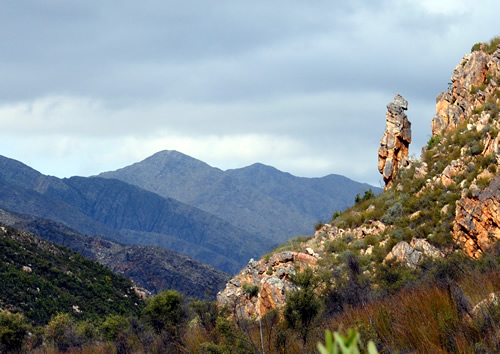 But there was no river. After making our way through Proteas and Restios we can across a small pond with several frogs. We filled up a bottle of frog pee just in case, and continued to navigate down the boulder strewn river bed. 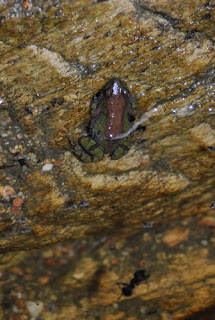 In the distance I could make out the shapes of trees on rocky cliffs. Was this the Willowmore Cedar? Suddenly a nasal whistle alerted us to the presence of Klipspringers, and this was quickly followed by the barking of baboons. It was clear that there must be water nearby, and sure enough we came across an amazing cliff and plunge pools with water. And on the cliffs around the pools were Cedars of all shapes and sizes – big, small, straight and twisted. We'd reached paradise. 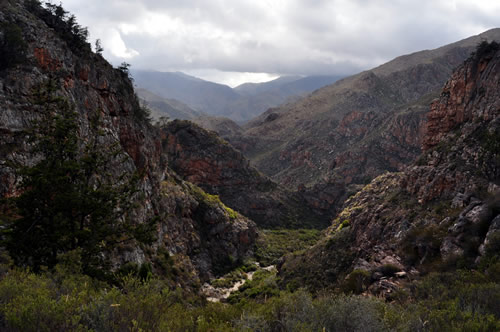 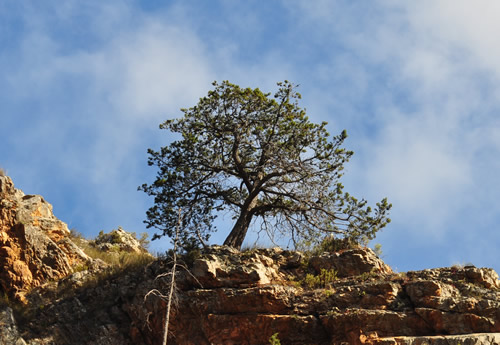 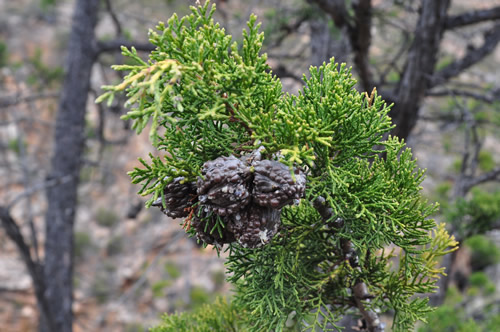 Eight hours hiking meant we crashed early. But that meant I was fresh to explore the next morning. I navigated my way down the cliffs and down the valley. Eventually I was picking up more pools and water. One pool even had fish in it, and this pale frog – possibly the endemic Ghost Frog? 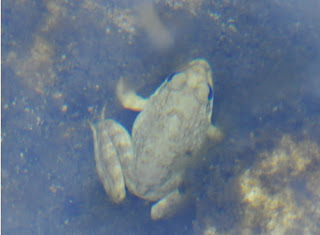 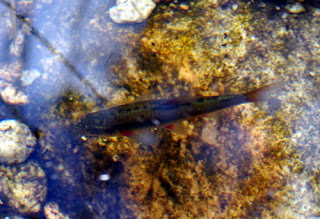 I finished my hike at a cave, visible from the plunge pools where we had camped. The cave had at some stage been used as a kraal, so there were only faint signs of rock art on the walls. A rock-walled ruin close by was probably used by settlers during the 1800s or early 1900s. But there were no more Cedars. It was clear the cedars are found now only on rocky outcrops, and one twisted form I found showed clear damage from fire. It must only be on these rocky outcrops that they escaped the axes of modern man and the fires that came with him.
Back at the pools, Bob had made a more impressive discovery of a hidden rock shelter with better preserved rock art. Amazing to think that the trees that towered up through the gorge nearby had probably been there when the original people that painted them had taken shelter there. All in all, we felt lucky to have made it to this hidden valley. 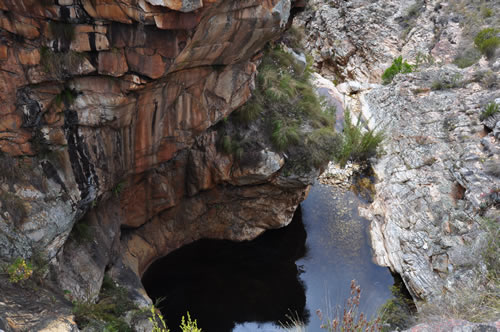 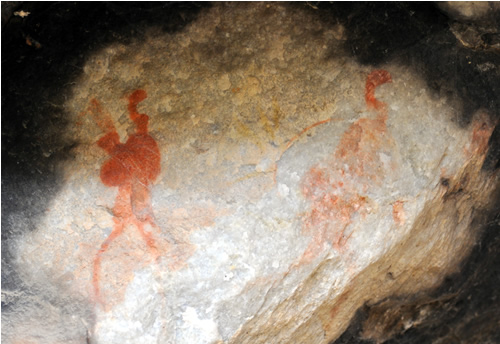 Close to the same spot where I watched the female sunbird bathing (previous post), I often noticed damp and bedraggled Orange-breasted Sunbirds. Finally a lot of patience paid off and I watched one come down and go through its routine. It was a fairly extended and lengthy affair, hoping in and out of the water, perhaps a bit more nervous of my presence compared the female sunbird and canaries. It didn't land in the perfect spot to show off its brilliant plumage, but I think this series of photos documents a fairly rare event in the ornithological world. 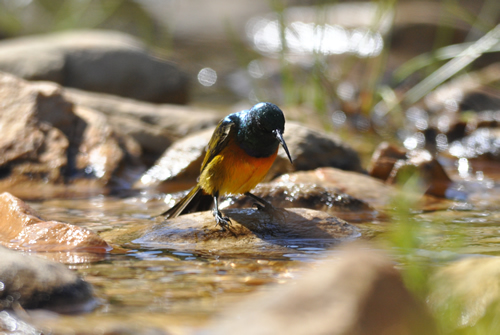 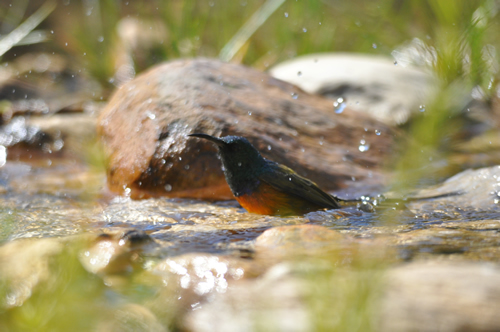 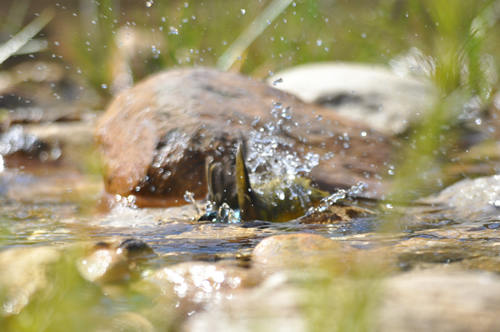 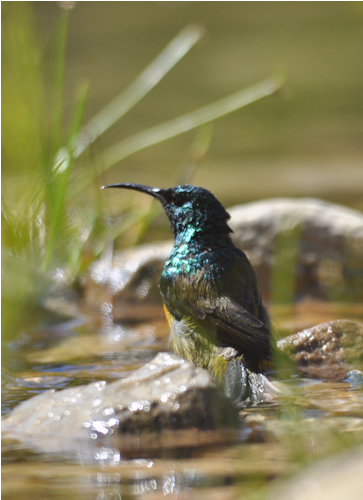 A couple of weeks back, during some really hot weather, I watched several different species of bird descending to some rock pools in our small stream to drink and bathe.
According to some articles in Birds and Birding from this year, sunbirds are rarely recorded bathing, although they do enjoy a shower in sprinklers. I have recorded Amethyst Sunbird doing this. I was lucky to photo an extended bathing session by what I suspect is a female Southern Double Collared Sunbird (based on size and colour).

This is a translation from Afrikaans of the frontpage article carried by the Burger newspaper on 2 December 2010, by Andries Barnard.
Farmer shoots Leopard Dead
'Activists suggest this is a result of friction with the Landmark Foundation'
Environmental activists are very concerned after the Leopard named Zuma, the most well known in the Baviaanskloof, was shot dead by a farmer this past weekend.
According to activists, who wish to remain anonymous, the farmer shot the leopard during the night after he lured it using recorded night-sounds and a whistle.
“It is the result of disagreement between the farmer and the Landmark Foundation” says the activist.
The farmer, Mr Dawid Smith from the farm Kleinpoort, did not wish to comment yesterday evening over these comments, or the allegation that 'hy gedreig het on die luiperd van kant to maak nie.'
“Someone has opened a case with the police and all I want to say at this stage is that I did shoot the leopard. I did not do it illegally,” he added.
Zuma was caught two years ago in a special cage on the Kango Farm of Mr Chris Lamprecht in the Baviaanskloof. The Landmark Foundation placed a collar on the animal so that they could monitor his movements.
The Director of the Landmark Foundation, Mr Bool Smuts, said that the collar was replaced last year with a new one. According to him, Zuma was shot with a high calibre rifle.
“The unlawfull shooting of a leopard that was a great tourist attraction for the Baviaanskloof, was a huge shock.”
“The authorities have already been asked to undertake a thorough investigation of the incident.”
Smuts added that environmentalists were aware that the animal had taken stock, but that it was unnecessary to kill the animal.
“Mr Smith decided to shoot the leopard after the Landmark Foundation did not compensate him for loss of livestock that was killed by a leopard ...” said Mr Smuts.
Mr Johann du Plessis, chairman of the Baviaanskoof Kouga Kaapse Bergluiperd-bestuurskomitee (BKKB) said his organisation did not support the wiping out of leopards, but that farmers have the right to see to the safety of their livestock and workers.
“Smith did not lure the leopard with a whistle or recordings. He found the animal amongst his livestock. Leopards cause thousands of rands of damage and the BKKB supports the cause that problem animals are hunted under a 'green' hunting system to compensate for losses. A farmer can recoup R250 000 of their losses if a leopard is hunted under this system” said Du Plessis. 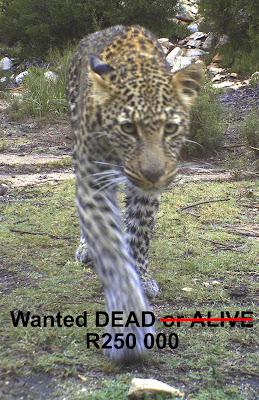