A day or two ago I was telling a friend: “Next Monday I fly from George to Johannesburg. Tuesday I fly Johannesburg to Sao Paolo. Wednesday I fly Sao Paolo to Lima. Thursday I fly Lima to Puerto Maldonado”
“Geesh, I hope that erupting volcano doesn't disrupt your flights!”
“As far as I know no southern hemisphere flights were disrupted by the volcano last time” I answered.
The next day driving to Uniondale I could not believe my eyes – the Kammanassie mountains appeared to have smoke billowing from them, and with the sharp, angular shape of Mannetjiesberg – the highest peak in the range – they looked just like a volcano eruupting (see below) 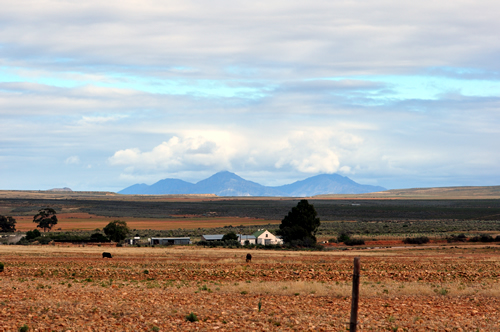 Fortunately the Kammanassie mountain range is made of sedimentary rocks – shales and quartzites made from mud and sand laid down millions of years ago. In fact – for better or worse South Africa does not boast a single active volcano. Looks like that the only thing that might disrupt my flights will be the clouds over Kammanassie.
1 comment:

The Man from Nam

You know like when you drive your car abroad you used to have those oval bumper stickers that displayed the cars country of origin? Like Great Britain was GB and South Africa ZA? Well, cars from Namibia – say NAM.
Anyway – to get back to the actual story here – you may know I'm training to get my ringers license, but don't have a Trainer – so I have to beg, borrow and steal training where I can get it. In this case, Neil and Gudrun took me up on an offer for free accommodation in exchange for ringing some new birds – after all we have some good ones here in the Fynbos.
Our first day out we headed to the Protea forest (well, thicket might be a better description – the 'trees' are no more than 4 meters high). It was a cold and misty morning, so it was foot stamping weather while we waited for the birds to get tangled in the mist nets – it brought a whole new meaning to the term 'mist netting'. The haul included a few Sugarbirds, Malachite Sunbirds, Orange-breasted Sunbirds and Southern Double-collared Sunbirds, most in some eclipse (non-breeding) plumage.
Day 2 we set up nets on the stream – which yielded huge hauls on previous ringing sessions. However, its been raining a lot, so birds were not thirsty. Still – a Victorin's Warbler, Cape Siskin and Protea Seedeater all presented themselves – much to the Man from Nam's delight. To make up numbers we trapped the Cape Weavers at a feeding table.
All too soon they were on their way again and I had to get back to finding out how depressingly the range of our Fynbos endemic birds has decreased – more on that another post. 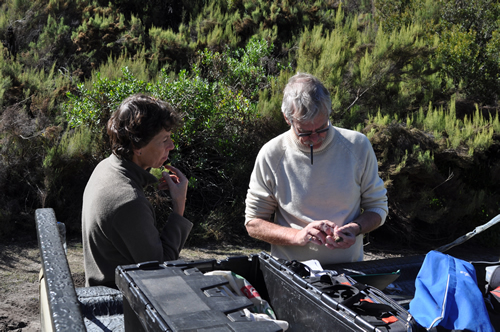 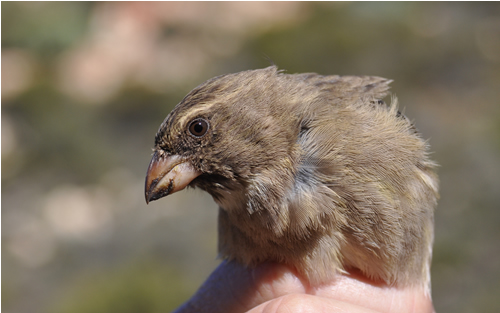 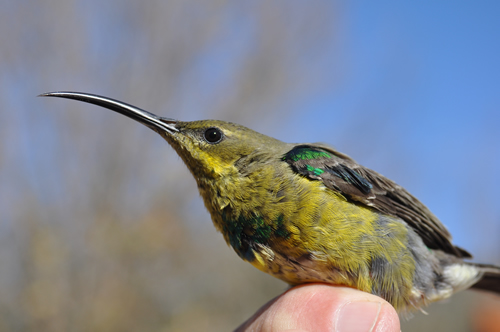 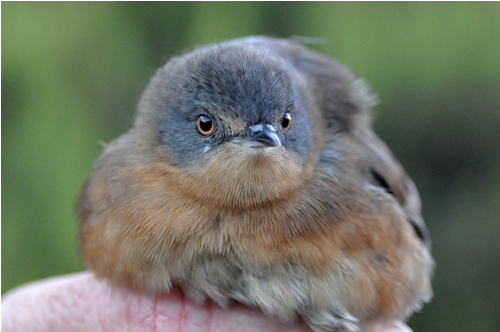 Being a fledgling contract Nature Reserve, we don't loads of dosh or the man-power to do all the things we want to. The list is long – remove fences, remove alien vegetation, replant indigenous vegetation and trees, fix erosion gulleys.... and so on. So the other day Hottie – a labourer from the farm next door – asks if we have scrap metal lying around as his nephew (Izi) is in the recycling or scrap business. Happens that one of the things we would like to do when we have time, money and manpower is get rid of loads of junk that is lying around – part of which included an old steel trailer in a stream bed. So – done deal – they take it out, sell it, and we have a cleaner back yard. Here they are at work cutting it up. 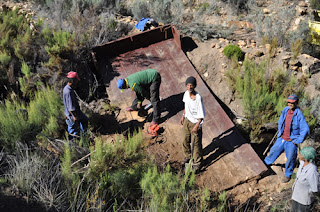 With so many different species of flowers here in the fynbos, the busy bees have a hard task at hand making sure they all get pollinated. We are lucky in the Cape to have a special kind of honey bee – Apis mellifera capensis - a milder version of the aggressive African Honey Bee. Peak honey production time for these bees is winter – when most of the fynbos species are flowering. 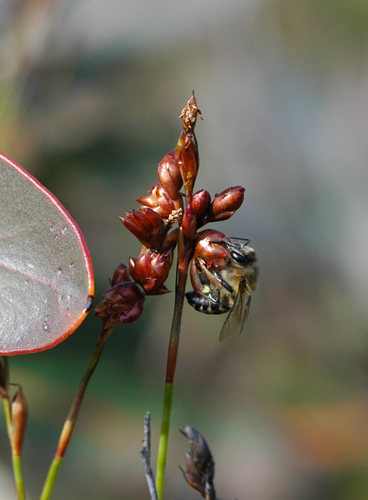 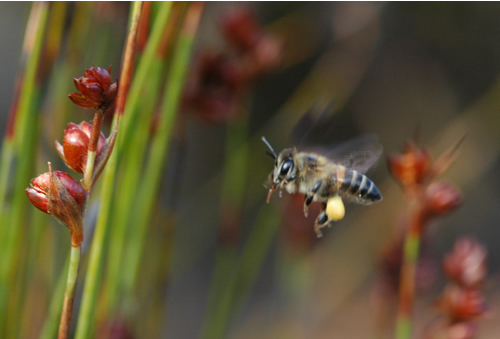 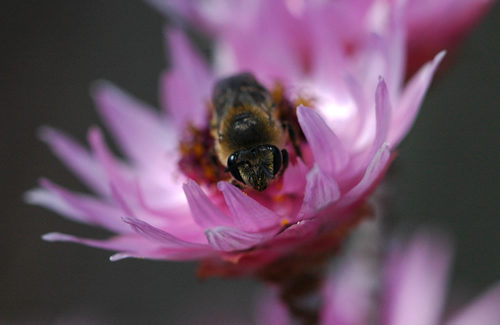 It is also when older queens up and leave their hives which have been taken over by young-upcoming queens. The other day we stumbled upon such a swarm – an incredible sight – a living ball of bees. The bees are all fairly docile as they are saving their energy to get to their new hive location. Where we are many hives are located in the cliffs and caves between quartzites and the ancient African landsurface (or oervlakte)
No comments:

Between the Baboons and the Hippo

Baviaanskloof is commonly referred to as the Valley of the Baboons. It could just have been called KougaKloof – which I think has a better ring to it, being partial to alliteration. That would have made it Valley of the Hippos. After all, the kloof itself is nestled between the Baviaans (Baboon) mountains and the Kouga (Hippo) mountains. Fair enough, not many hippos around here these days, but you are guaranteed baboons. Baviaan is a corruption of the Afrikaans word Bobbejaan, while Kouga is a corruption of the Khoi-San word Ghou!ka. The ! is a click.
This is the only photo I could find in my archive of a hippo with a baboon. A female bushbuck can also be seen. Baboons are often seen with Bushbuck in the kloof. It is said the Bushbuck get a warning of danger from the many eyes of the troop. 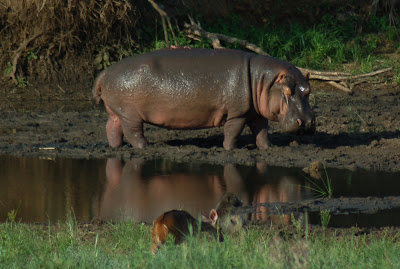 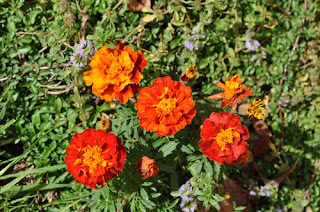 Two days ago I was taking some friends to check the leopard trap in the afternoon. We drove up to a stream, from which it is only about 200m to the cage (which is not visible at this point). Not wanting to cross the stream, we got out and started walking towards the cage. As we crested the side of the stream, a guttural roar echoed down the kloof and rippled through us like the after-shocks of an earth tremor. The last time I had heard something similar was when we had darted the female leopard in March.
We have the leopard! I thought to myself.
“Quick, get in the landrover, I want to get to the cage as quickly as possible!” I said to the group. We drove up towards the cage, which I envisioned would be occupied by a rippling, pacing, angry leopard. Imagine my surprise when I first glimpsed the cage it was empty! The door was wide open.
We walked up to the cage. Some tracks led up towards the cage, but as the surface was hard, I was unsure if it was leopard or baboon. We heard nothing more from the now silent valley, and with other tasks at hand we called off our afternoon adventure.
The next day we decided to walk up the valley beyond the cage. As soon as we approached the cage a huge pug-mark in the dry sand caught my attention. These were clearly the footprints of a large male leopard, and it became clear that they were fresh and that he had bypassed the cage by springing over the low bushes placed on either side. We had evidently disturbed him the previous afternoon – we must have been within a hundred meters of this most beautiful of cats, but like shadows in the dark, he had melted away leaving only echoes in our imagination.
We followed the tracks for about a kilometer up the valley, before we lost them. Barking dassies indicated a predator in the surrounding hills, and we could see no sign of Black Eagle or Jackal Buzzard – the main reason the dassies bark.
This is the closest we have come to catching the male leopard. Researchers have said they have seen tracks of leopards that have been caught in these cages bypassing the cages – so this smart leopard may wear his satellite necklace and the secrets there-in a while longer yet. 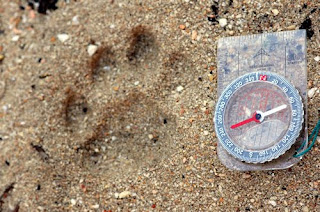