Anniversary time and so time to do something special. What better than a log cabin with a fireplace on a hill overlooking a long lake that flows into the sea. If you find nature orgasmic, then Fynbosvlei is your Casanova – a 40ha stretch of coastal fynbos on the Swartvlei (the largest of the Wilderness lake system). 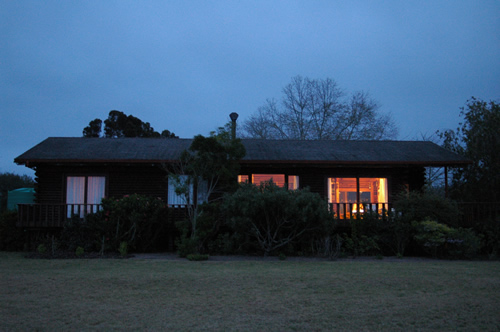 The beautiful log cabin overlooks a bank of indigenous flowers towards the lake. We timed our visit to coincide with some winter hang-over weather – grey, mist and rain – more excuse to stay indoors of course! So light was not great for wildlife photography – the flash had to work overtime in order to document some of the spectacular array of flowers on show, all accessible through a winding series of trails. 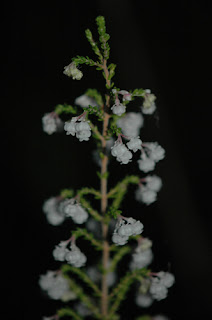 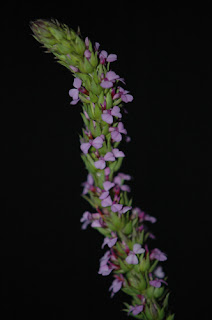 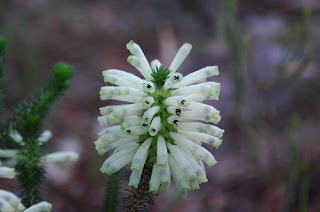 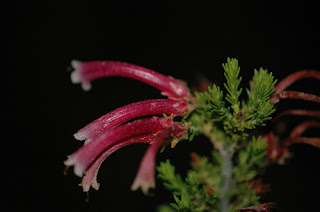 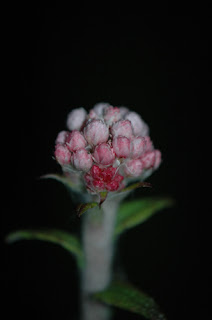 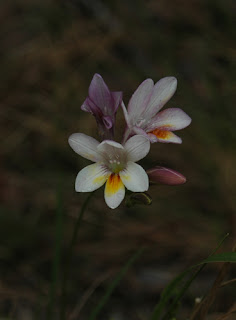 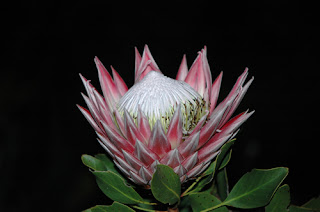 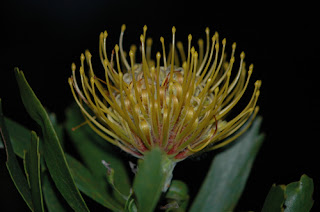 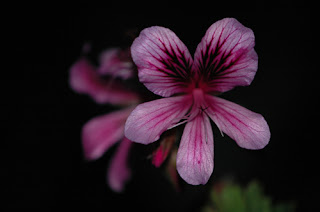 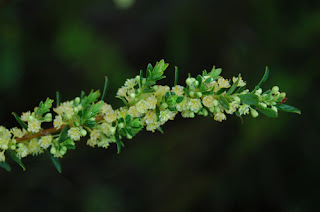 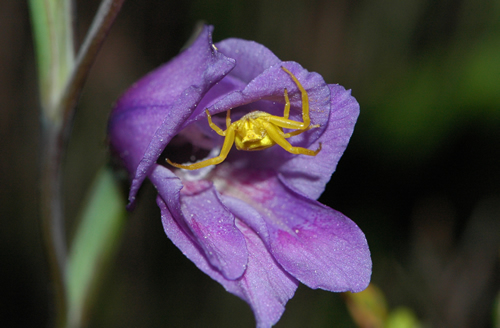 On our last day we also had a break in the weather which allowed me to paddle out onto the Swartvlei on a courtesy canoe to admire the area from a different point of view.


All in all – highly recommended – for more information visit http://www.gardenroute.co.za/sedge/fynbosvlei/
On Wednesday we headed home via George to do chores. Back to life. We just got through the Outeniqua pass before further rock slides shut it down completely. On Potjiesberg pass we came across a troop of baboons playing in the road. We did not give this fellow his toy: 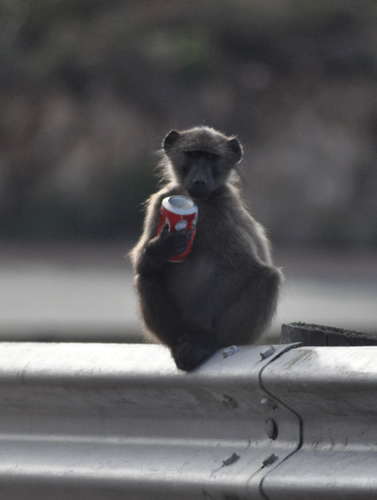 Can't argue with the apricot

The apricot tree is the first in our orchard to decide that it is time to come out of winter hibernation. This seems to have been met with approval by the resident weavers and some stray Southern Double-collared Sunbirds. Actually, I never knew these blossoms had enough nectar to make them attractive to birds - unless they were just smelling the blossoms? I had to take break from chopping wood to catch some of the action: 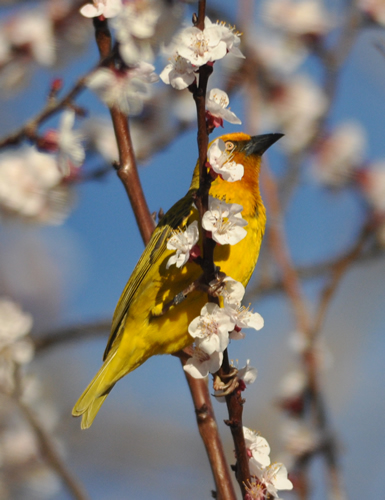 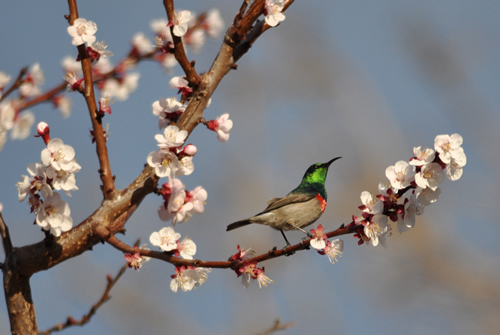 On Tuesday Anja, Elena and I headed into the kloof to attend a meeting put on by Willowmore tourism on how to make Baviaanskloof a destination (as opposed to just a drive through route). Water is still up on the western section – the eastern section through the reserve has only just been reopened for 4x4s. The kloof is looking beautiful with Aloes and other flowers along the way. 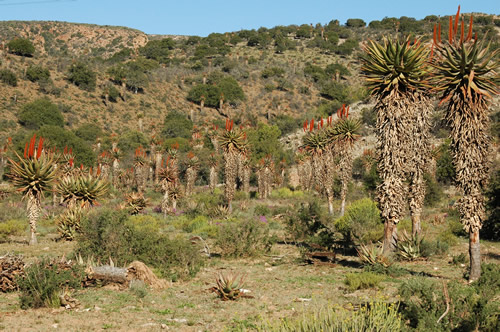 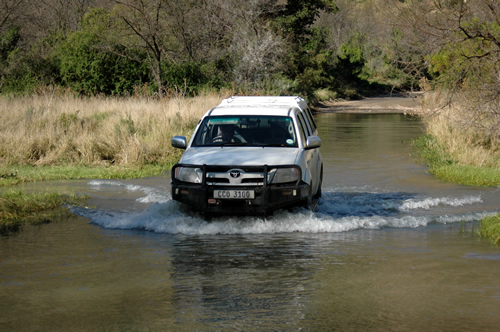 We arrived a bit late because there were lots of beautiful birds to distract us along the way.

One other tourism company, one guide from the Sewefontein community, the reserve manager, and the hosts of the meeting (Pieter and Magriet Kruger from Zandvlakte) and ourselves were the only attendees. Apparently most other kloof residents are busy with their farming now that there have been all these good rains. The meeting was chaired by the mayor of Willowmore, with special guest speaker Trudi Malan from Jeffrey's Bay.
We learnt that we are already a tourist destination. However, Pieter and Boetie Terblanche pointed out they had many cancellations due to the road through the reserve being closed and maybe we need to print bumper stickers saying 'Baviaanskloof – more than a road', although I'd say it should be 'Baviaanskloof – Accessible Adventure'. We should also be working harder to attract tourists other than the 4x4 community. Not that we (Blue Hill Escape) get many of those anyway!
Either way, lunch at Zandvlakte was lovely, and it was a good excuse for a drive through the kloof.
No comments:

Probably not (to answer my self-imposed question), since last night the thermometer hit -3 degrees.
Perfect frosty morning for a walk! Since I'd noticed quite a few things in flower recently, thought I better head out and document some of them. Fynbos contains many entertaining subjects for macro photography.
I'm not a plantologist, so some names of things below might be wrong (if you really want to learn latin plant names best buy Plants of the Klein Karoo).

An idiot's guide to Cycle Touring

Pied Drongo – the one and only?

We are lucky to have a resident Fork-tailed Drongo of fairly unusual and striking plumage. I first noticed her last year hawking bees from a wild bee hive in a cliff face. I think it's a she because the females have a less deeply forked tail, but probably more because she's beautiful. For a while she took up residence along a donga that had been cleared of wattle – we'd occasionally see her perched on the telephone lines. At one stage she was being pursued by a normal, black, plumage drongo. I was not sure if this was because of her unusual coloration or because he was interested for other reasons. Despite several attempts to obtain clear photos, she has always been a little wary of my presence.
This winter I was checking out our bee-hives which had been turned over by baboons. It was a windy, overcast day and the bees were having difficulties leaving their hives. Suddenly the dramatic black-and-white flash of colour caught my eye. The pied drongo was present, along with three other normal drongos. They were perched and would now-and-then sally forth and pick an unfortunate bee from the air. Returning to the perch, the bee would be thoroughly beaten and then swallowed. For several days now she has kept the company of one normal drongo – the other drongos were probably another pair, also present to make the most of the defenceless bees, as were Cape Rock Thrush, Lesser Honeyguide and Cape Sugarbirds.

Of course the drongo is not 'pied' or the result of hybridisation with a Common Fiscal; it is partially leucistic – so it is partially unable to produce the pigments that result in the usual black colour in some areas. I'm personally hoping that she has lots of semi-leucistic babies, it will make a normally common bird a lot more interesting!

For more on the on Fork-tailed Drongos and their distribution in southern Africa, visit the SABAP2 website. http://sabap2.adu.org.za/spp_summary.php?Spp=517&section=2
No comments: