In South Africa, at least 73 bird species in 24 families have been recorded feeding on 14 Aloe species and 8 other flowering plants and trees, but this old list is far from exhaustive. Occasional nectar-feeding is very common and perhaps 1,600 bird species worldwide (nearly 1 in 6) feed on nectar to one degree or another. In southern Africa, many Aloe species flower during the dry winter season and offers copious dilute nectar to a variety of birds. Overall bird abundance can increase 2–3 fold at the peak of nectar availability. Nearly 50% of all birds recorded in Suikerbosrand were observed feeding on Aloe marlothii nectar. Only two species of sunbird were observed feeding on A. marlothii nectar, and both occurred in low abundance. This is because Aloes are one of the species of flower that rely on generalist nectarivores for pollination, which prefer glucose and fructose type sugars, while plants that rely on specialist nectarivores for pollination produce sucrose.

All the following photos were taken in a few hours in the early afternoon at the Aloe stands at Meijersrus – a working stock farm with various accommodation options at the De Rust side of Meiringspoort. Aloe ferox is the large Aloe most common in the Klein Karoo. Photo quality varies tremendously due to the fast moving cloud which produced occasional rays of sunshine, but generally had me popping the flash up and down all the time. Most commonly observed were Cape Weavers and Streaky-headed Seedeaters. The later appeared to be eating immature ovaries – perhaps for developing seeds, although they may have been eating the nectaries too. They definitely destroy the flowers and can't be considered pollinators. In addition, the Cape Sparrows were present, but appeared to have built a couple of nests in the spiny succulent leaves – and were not observed feeding on the nectar. A photo of a Familiar Chat shows that species using a spiny leaf as convenient perch during its foraging activities.

A Malachite Sunbird appeared very territorial, spending a lot of time chasing away a female Greater Double-collared Sunbird. The male of the later species spent more time defending a patch of Tecoma capensis, perhaps not wishing to pick a fight with the green goblin. While activity seemed intense in the morning – I could not stick around to take photos as I was conducting a survey up Meiringspoort. Undoubtedly a dedicated photographer with more time at this spot will come up with even more species and better photos! 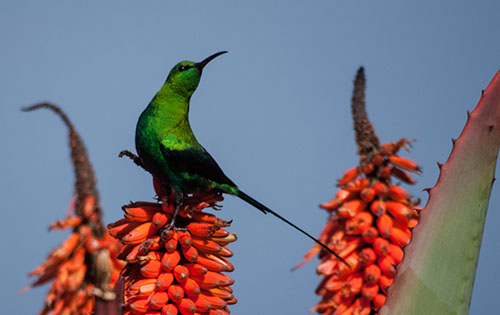 A full moon guided me towards Uniondale, away from those still slumbering at Blue Hill. While the departure was late compared to summer – just past 6am, it was still dark and I had to drive cautiously to avoid panic stricken Cape and Scrub Hares along the Hartbeesrivier road. With frost most mornings in the mountains, and winter Fynbos weather likely to turn at any time, this follow up survey was not something anyone would want to do entirely by bike. Well, I might have considered if I had attracted major sponsor or some documentary deal, but there is no fool like one who suffers in silence. This is going to be hard enough as it is. As I type my breathe billows around me as I sit at the entrance of my tent waiting for a kettle to boil – for a hot water bottle to warm my aching toes. They are cold despite two pairs of socks, one of which is the most expensive Cape Union Mart has to offer rated for coldest conditions. With snow on the slopes around me, this night will test them even further.

On departing Uniondale this morning a grey and black wall of cloud and rain was looming along the N9 towards me, enveloping the mighty Kammanassie mountains like one might pull a blanket over a child. Clearly I was not going to get a survey done this morning. Weather reports for the rest of the day promised better weather, so instead of abandoning and heading home, I sought sanctuary with old friends in town until the rain abated. The lifting clouds revealed a Kammanassie transformed from bleak winter grey to winter’s bride with her veil of snow. 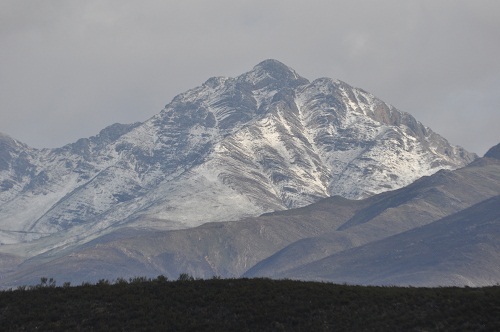 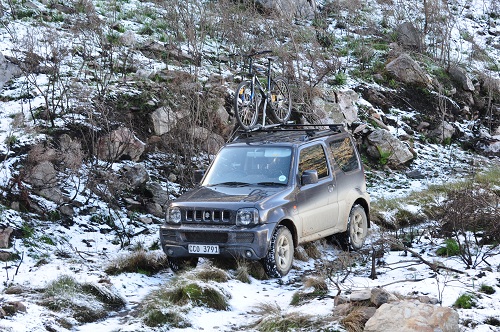 For the first time my little Suzuki Jimney (the smallest 4x4xfar) was faced with slippery muddy clay on the Kammanassie road. My first stop was Willie Woudberg, who’s land one traverses to get the Nature Reserve itself, and then onwards into the mountains. It has been 3 months since my last visit and a landscape more transformed from that time it is hard to imagine. The shapes of the valleys are still there, but  instead of Protea punctata feeding flocks of Orange-breasted Sunbird there are but black skeletal remains, with a veneer of green from sprouting grass and cautiously emerging geophytes waiting for the spring. While it is nice to dream that those sunbirds moved on to some better place, I am sure it was not one of this time and space – they need food daily and have limited dispersal capabilities. Perhaps I will catch a glimmer of their souls among the spring floral display.

Such bleak facts have come to me over the last month, where my absence from the blog world was due to much academic focus. I have been analysing data from ringed birds to get an idea of how and why they disperse. Generally not far in the case of the Cape Sugarbird and Orange-breasted Sunbird, especially not when compared to what the generalist nectarivores like Malachite and Southern Double-collared Sunbird are capable of. I have also learnt from information gathered from weather stations across the region that the Western Cape has had 25% less rain in the last 15 years compared to the previous 15 years. We are also now 0.5 degrees warmer. So it is getting drier faster than it is getting warmer.

Still, the change in conditions here in the mountains threw up one unexpected delight. As I was painfully crawling up the mountain, 4x4 engaged, dodging fallen rocks and snow drifts, a caught a glimpse of a bird scuttling along the road verge. A Victorin’s Warbler! With no dense vegetation to hide in, and obviously needing a meal after the dreadful start to the day, the little bird foraged its way along the bank looking in every nook and cranny for a slumbering bug. For me, this was the best sighting ever – including my best photos of this bird. And not long after, a second individual was also out and about. So, a glimmer of life on this mountain of ash and ice. 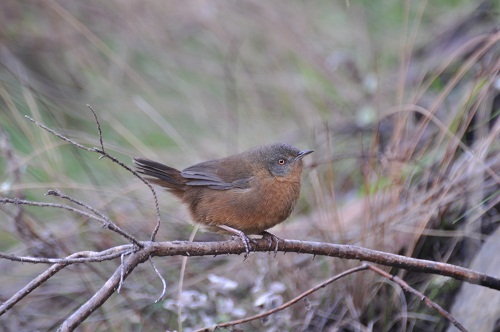 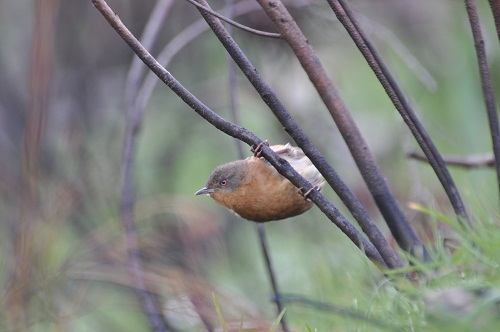