The Black Stork is a beautiful bird that has a wide distribution from southern Africa to Asia. In the northern parts of its range it is migratory, but the southern African population is considered sedentary (but moving widely from the core breeding areas centred in Zimbabwe). Although generally rare, it is considered as a species of Least Concern by Birdlife International. But this is one of the species that appears to be doing very badly now in South Africa as it is very sensitive to disturbance – this article summarizes how the reported range has decreased between bird atlas projects:

In 2010 I was lucky enough to view a Black Stork on the Hartbeesrivier road that leads to Baviaanskloof on the western side. It looked sad and bedraggled. This photo shows the first Black Stork I have seen since then – a few kilometers from the initial sighting, but 3 years later and looking rather handsome.

Is the species returning – i.e. does it move more than we think? If we look at the reporting rates, this shows a spike for April 2013. Last year we experienced record rainfalls, and dams and rivers have been full for a long time – perhaps fish stocks have bounced back and this has meant there is food again for this beleaguered species. Of course, it might just be a respite on the inevitable track toward extinction. Where they are going to... no one knows (perhaps they are disappearing into a Black Hole!)

Unfortunately the photos were taken under low light conditions, so they are more documentary than works of art. 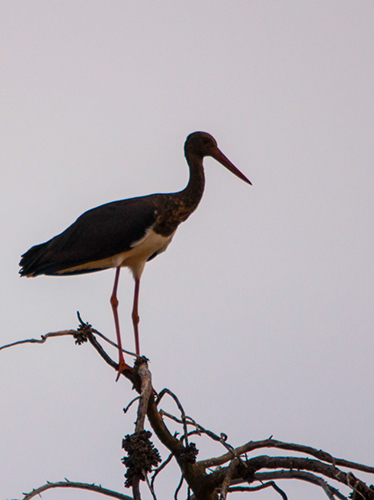