Huge claws of a giant beast encircle you - with sharp talons that at any moment could tighten and squeeze the life out of you. Do you lay back and say “This is it, serves me right for being distracted by that gorgeous member of the opposite sex,” or do you do everything in your power to fight for your life? Most of us, birds included, would not give up without a fight or figuring out some way of escaping.

Those beautiful plumages that distract so many birdwatchers are of course really intended to attract the attention of potential mates, and keep others of the same sex at bay. And if we notice them, so do predators. Anybody that has handled birds will know that there are a variety of anti-predator behaviours displayed by a captured bird, including biting, losing feathers, and screaming which may attract the attention of competitive predators. Like lizards losing their tails, bird behaviours evolve if they provide a chance to escape. For instance, research has shown that the frequency of tailless individuals gives a rough idea of the frequency of successful escape from predation. So some birds may have evolved the ability to lose feathers easily as a distraction or escape technique. 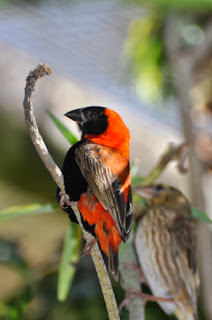 Studies of a range of species have shown that predation affects the expression of what are known as 'secondary sexual characteristics’, including brightly coloured plumages and long tails. Predation risk can be reduced by defences or restriction of signalling to specific times, places or situations, which is why birds like male bishops lose their bright colours outside the breeding season. It also makes sense that since conspicuous sexual signals are common in males, and males and females are often behaviourally and ecologically different, that males and females differ in anti-predatory behaviours.

A recent European study looked at escape techniques in a variety of birds vulnerable to predation by accipiters (small birds of prey) and domestic cats. Birds were mostly captured with mist-nets and were scored for how much they: wriggled; bit (by offering a finger to the captured bird!); lost feathers; called in distress; or displayed ‘tonic immobility’ - a standard and harmless measure of fear where the bird is placed on its back and the time until the bird rights itself recorded. The longer the time, the higher the 'fear' score – and may be a ‘play dead’ trick.

Results of the study showed escape behaviours explained variation in susceptibility to both accipiters and cats and was species-specific. This suggests that individuals from different species have evolved specific kinds of escape behaviours, possibly in response to differences in predation risk. For instance, birds that occur in urban and rural habitats vary in their anti-predatory responses – those in urban environments display responses that are deemed more likely to result in their escape from domestic cats (more screaming), while those in rural environments show those more likely due to selective predatory pressure from sparrowhawks (more biting and wriggling). 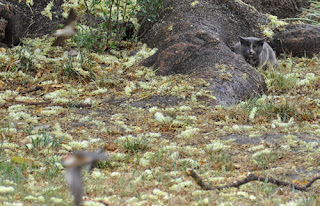 So what are the anti-predatory techniques of some South African Fynbos birds? Anyone who has ever handled a Cape Sugarbird would agree that they are vigorous screamers (this is expected for a monochromatic species) and they use their sharp talons to great effect. As predicted, sexually dichromatic species call less: the smaller Orange-breasted and Southern Double-collared Sunbirds are incessant wrigglers and somewhat surprisingly given their weak bills – they also try to bite. Yellow Bishops are obvious biters with their strong bills designed for cracking seeds and also perhaps the digits of distracted predators. Cape Grassbirds, Victorin’s Warblers and Cape White-eyes are delicate birds which show a mixed range of responses, but all are ‘shedders’ to some degree. This makes me think of advice I have received for how to escape a bear – throw your clothes at it while running away.

Getting back to our theme question, birds have a range of ways to escape potential predators, and each bird species tends to have techniques that work differently, some of which involve discarding beautiful plumage if needs be.

Thanks to Phoebe Barnard for comments on an earlier draft of this – which was turned down from African Birdlife magazine for being too complicated. I’m hoping my small circle of readers were able to follow – it says a lot for your intelligence if you did!