To the Berg and back

Well, a week of being 40, and I still feel alright. The month's highlight was a long road trip through the Eastern Cape and KwaZulu-Natal, combining the Birdlife South Africa meeting with a bit of a family holiday. The weather was rather wet and kids were a bit demanding, so awesome photo opportunities were few and far between. Below are some of the trip highlights.

With Anja in the front seat and Elena and Charlie squirming in the back of the Jimney, we set out on the 4 March for Groendal Nature Reserve, a 30 000 hectare reserve which marks the eastern end of the Baviaanskloof Megareserve. Its just outside Uitenhage and is above all else a hiking destination – apart from the road in to the campsite and out again, there is very little infrastructure. Apart from the wet weather, we also had to spend our one full day in the area sorting out kids papers in Port Elizabeth.

In the afternoon we thought we'd drive to the start of a hiking trail marked on the map. We drove through an open gate and winded our way through astounding scenery to the Groendal dam, to a locked gate. We couldn't find the trail. On our way out we met some people driving the other way – turns out we were on private property – there is a large private farm in the middle of the Nature Reserve! Normally the open gate is shut and locked and the hiking trail is no longer there. So be aware if you are planning a visit to Groendal for the first time! 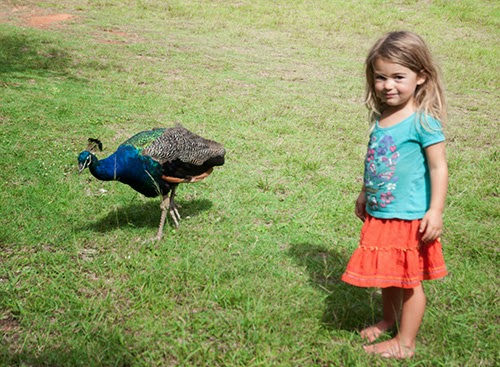 Elena enjoyed feeding the peacocks that visited the campsite, which originated from the private property - so not technically wildlife.

We then followed the long road to Qunu – birth and now resting place of Nelson Mandela. There is a large museum on the outskirts of the rural town which documents much of the struggle against apartheid. However, we still had a long way to go – our destination was the campsite of Coffee Bay. 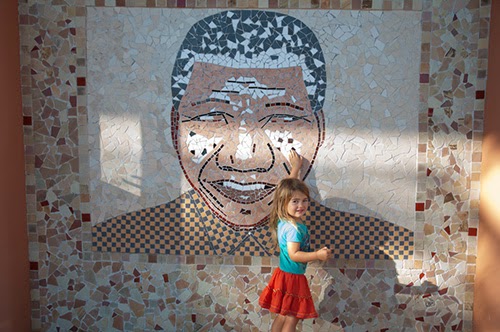 Coffee Bay is a big surfing destination and backpacker destination. Just as with Groendal, we had the large forested campsite to ourselves. Anja spent much of her time there to avoid the harassment of peddlers and beggars on the beach, but Elena was very excited by the sea and all that went with it. 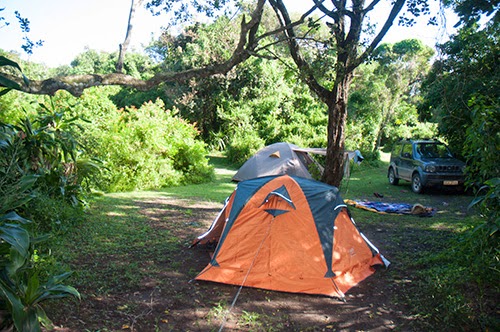 After a stop to visit family in Port Edwards, where thankfully we did not have to camp (starting with a dramatic thunderstorm at Coffee Bay it rained for four days consecutively), it was off to Sani Pass. For my birthday we had booked 'luxury' accommodation in the form of the 'Stone House' at Mkomazana Cottages. This historic location used to be the base of the first trading station from which journeys by donkey would be undertaken over the Sani Pass to Lesotho. My birthday present from Anja – a day free to explore the pass by myself while she looked after the kids, which I have to admit was very much appreciated.

I set myself the modest target of spotting 40 birds – although given the inclemental weather I was worried this would be a bit difficult to achieve. My target species were the Drakensberg specials: Drakensberg Prinia, Drakensberg Siskin, Drakensberg Rockjumper, Gurney's Sugarbird and Bush Black-cap. I dipped on the siskin (somewhat to my surprise) but got all the rest – the Rockjumper by only the skin of my teeth as I had just set off from a rain-washed Sani Pass summit having given up for the day, when I spotted a small family scurrying around next to the road right below the 'Highest bar in Africa' where I had spent a few hours hiding and waiting for the weather to clear. 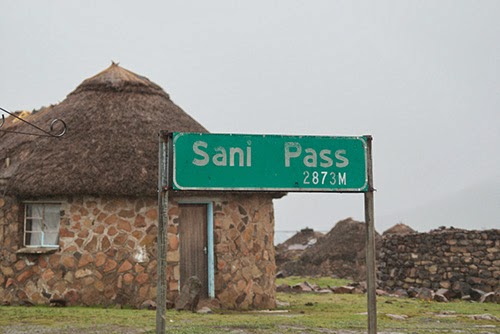 Sod's law of course, having navigated the conveys of 4x4 tourists on their way up the summit, by the time I reached the bottom the summit was in glowing sunshine. At least this meant I was able to go for a short walk and achieve my target bird list for the day.

If you are thinking of doing the Sani Pass, its well worth it – scenery is truly splendid. The South African border post is near the bottom of the pass, while the Lesotho border post is at the top. They are quite used to day trippers, so paperwork is a formality. There is a R30 'toll' at the Lesotho post if you are planning on stopping at the famous bar at the top. The road itself is not that challenging in terms of a 4x4 route – my dad likes to tell the story of a friend who drove up in an old MG, and there is a steady flow of passenger mini-buses ferrying people to and from the mountain kingdom of Lesotho.

After Sani it was the backroutes of the Natal midlands, those green rolling hills below the buttress of the Dragon Mountains. We were blessed with a sighting of a Bearded Vulture – this species is listed as Critically Endangered in South Africa with fewer than 150 breeding pairs. The bird was in the company of a small flock of Cape Vultures (Endangered). Our destination for the day was the Royal Natal National Park – where we would be based while I attended the Birdlife South Africa LAB (conference associated with their annual get together). There I would learn that the population of Bearded Vultures is steadily declining (a legacy of poisoning and persecution), but that the species is facing further severe threats from wind farms planned for the highland areas. Modelling by Dr Tim Reid has shown that a single bird in these areas faces fatal strike threats up to 40 times a year.... not good news at all! Basically, vultures are very prone to strikes from wind turbines because they have evolved to look down and not overhead for danger. Birdlife South Africa are vehemently opposing wind-farms in these areas.

Overall, the conference, hosted at Mont-aux-sources hotel, was very enlightening – there were talks by a wide variety of many of South Africa's top ornithologists as well as fascinating talks by guest speakers that included the likes of John Ledger on the history of research on vultures and powerlines – with photos of vultures literally exploding as they were electrocuted; Prof John Croxall spoke of the amazing work to save albatross and seabird populations around the globe; while Dr Ali Stattersfield gave an overview of the awesome conservation work undertaken around the globe by Birdlife International. Adrian Craig spoke on the colors of birds' eyes and legendary Warwick Tarboton presented the first data on the long journey made by Woodland Kingfishers as revealed by geolocators – the birds spend the South African winter in Savannas of Central African Republic or Southern Sudan.

While I was trying to deal with all the information coming in on current research on South Africa's birds, Anja was enjoying breathtaking views of the Amphitheatre from the comfort of the Tendele resort in Royal Natal. We extended our stay there for a night after the conference to spend some time hiking under sunny skies with the backdrop of the Tugela falls and the Drakensberg's Barrier of Spears.