What are those sugarbird claws really used for ? 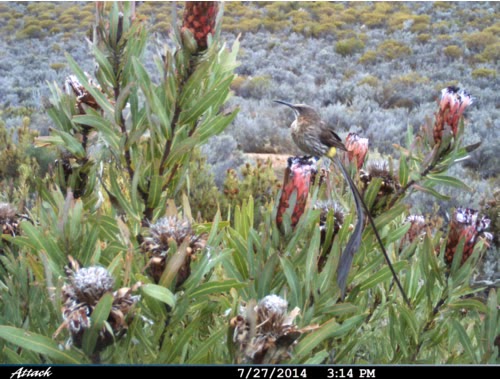 Ever since a sugarbird first drew my blood with its needle sharp talons, I've been convinced that these claws are lethal weapons that are clearly used for defence, but probably also for intraspecific  competition. The grip of males is much stronger than that of the  females and they need to defend their territories from intruding males.

I suspect their tarsal strength is matched only by raptors gram for gram,  and that their ability to grip wind-blown flowers is a secondary benefit. The grip of sunbirds is nowhere near as vicious. Malachite sunbirds have nowhere near the same strength. In addition, while all sunbirds attempt to bite as part of their defence strategies, sugarbirds invariably never do (they don't have to is my take).

However, as with most species, aggression is rarely observed and even more rarely would these culminate in lethal battles since posturing and displays are far less costly. On only one occasion have I observed an embraced battle when two sugarbirds tumbled through the vegetation to the path near me during a survey in the Langeberge. The event was over in seconds with both birds flying off seemingly unscathed, a more serious outcome perhaps interrupted due to my proximity.

Downloading camera trap photos the other day, I found this photo....  which I am interpreting as an attack where the claws are involved. I think these are young males or males that have just arrived to the area, as most other birds at this site are color ringed. 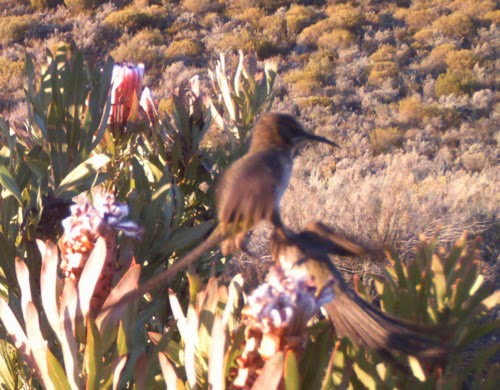 Phoebe Barnard, my postdoc supervisor had this to say to the above: I have many times seen territorial males aggressively fly at younger presumed males (I could not always rule out young females) in the few months post-breeding season.  Sometimes they would supplant these birds aggressively and I am sure there is the option of clutching at opponents.    I've also seen at least three of the sort of brief tumbling/grasping interactions between birds that Alan describes, and yes, they are over in seconds.   But on none of these cases did I think that my proximity was the issue ending the fight (I was sitting unobtrusively doing time budgets or other observations).   Fundamentally, sugarbirds are noisy, scrappy, aggressive, socially intense birds (sometimes tolerant, sometimes intolerant).   So they do certainly fight briefly at frequent intervals.

While married and working on raptors, I observed several cartwheeling events between raptors, the more extreme of which would involve raptors plummeting for a while through the air with talons interlocked.

Mark Brown of Nature's Valley Trust, and a seasoned ringer had this to say: I have always assumed the "holding on to Protea heads in high wind" theory was the best fit. Have seen a few squabbles, but not many (2 I can recall?).

And just to support the blowing in the wind theory, I just downloaded this video where a male Sugarbird actually manages to feed despite hectic movement of the Protea upon which it is perched: Don't get dizzy watching!