Publication: Aspects of the ecology and morphology of the Protea Seedeater

Its probably four years since I saw my first Protea Seedeater – while on an exploratory walk shortly after first arriving to Blue Hill at the end of 2010. Anja and I were sitting in the shade of old growth Fynbos when a pair came to investigate us. I remember the occasion as the birds seemed rather relaxed and I was able to get this photo:

At the start of 2011 my interest in Fynbos endemic birds was fully developed, and in order to determine bird movement patters I was training to do my ringing licence. Mike Ford, one of South Africa's most experienced bird ringers, offered to come and stay for a few days at Blue Hill in order to train me. It was a drought year, and scores of canaries and siskins were coming to drink at our stream. After two days, Mike had been propelled into the second most experienced Protea Seedeater ringer, with 15 birds. This number also represented a 30% increase in the total number of Protea Seedeaters ever caught in South Africa. 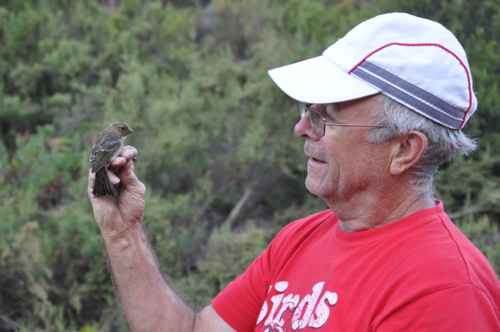 By the end of the year I was a qualified ringer, and catching my first Protea Seedeaters alone. Then in 2012 came the 'big' fire. All our old growth Fynbos, some of which was over twenty years old went up in smoke. I remember going for a walk in the embers and seeing Protea Seedeater and thinking 'agh shame, all your food is gone'. Luckily we had good rain just after the fire, and on subsequent walks Protea Seedeaters were encountered in flocks! They were coming to feast on freshly released seeds from all those old proteas.

A ringing session in the burnt area saw me record a record number of captures - over 25 individuals!

I have since ringed 84 of these intriguing birds, with four recaptures. I decided it was time to record my observations, which were written up for the African Zoology journal and can be found here: http://reference.sabinet.co.za/document/EJC160492

This is the abstract of the article:

The Protea Seedeater, Crithagra leucopterus, is one of six passerine birds endemic to the Fynbos Biome, South Africa. It is the least known of these, and there is very little information on breeding and habitat use. Through nest observations and a bird ringing scheme in the eastern sections of the Fynbos, we provide updated information on habitat use, breeding and population biometrics. We document changes in capture rates for a suite of birds in relation to a fire event and use of burnt and unburnt sites within Blue Hill Nature Reserve, South Africa. Protea seedeaters were recorded nesting in mature Fynbos, but feeding in recently burnt Fynbos on freshly released protea
seeds, suggesting the species benefits from smallscale burns that create a landscape of mixed veld
ages. Protea seedeaters weighed less and had shorter wings compared to those of the western Fynbos. Further habitat-use and life-history information on protea seedeaters is needed to help guide conservation management plans, especially in the light of changing fire regimes in the Fynbos. 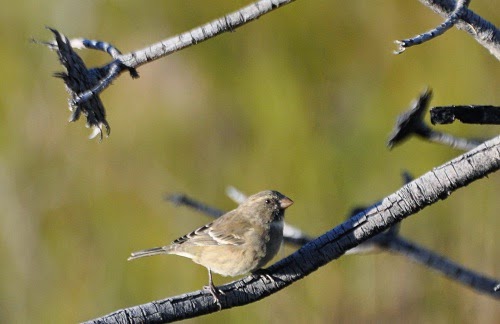