We knew there was something odd going on pretty early on. The radio telemetry signal was not coming from anywhere near the Cape Rockjumpers I could see on the other side of the valley by the predawn glow. One of the birds was the female we knew from the cascades territory, female blue, named after the blue ring on her right foot. I presumed the male with her was her mate, the cascades male, and that we were dealing with a case of a dropped telemetry tag. The birds foraged actively among the rocks, and engaged in a bit of what appeared to be playful socialization. All seemed well. I lost sight of them when they flew to the west facing slope, as they headed for the early morning sunshine which would add some warmth to the morning that had started at 5 degrees Celsius. Krista got a view on them and carried on the observations, while I headed back to trying to find the dropped tag, always a mission when the signal bounces around the rocks, crags and valleys.

After about an hour Krista let me know that she’d lost sight of the pair of rockjumpers close to where I was looking for the tag. I tried to locate them, and tried and tried. They were nowhere to be seen. Eventually, we started a sweep search of the territory. Two hours later, and still nothing. That was when I started to get worried. We knew these birds, they were always here. Where were they now? Come to think of it, had there been any rings on the male bird? Krista didn’t recall seeing any.

Maybe we weren’t just looking for a tag, maybe we were looking for a tag with a dead bird attached. I headed back to where I had been looking, and project volunteer Brian brought up another telemetry set. With this equipment within half an hour I was picking up a strong signal, and narrowed down my search to a boulder. Putting down the equipment, I peered around it. There were feathers, lots of feathers, the outcome of the search now seemed inevitable. A bit more searching, and the red and green rings that the cascades male had worn were found lying in the dirt, with more feathers and some bones. Finally, stretching and grabbing blindly under the rock I pulled out the chewed radio telemetry tag.

Judging by the location under the boulder, together with the feathers and damaged tag, the cascades male had been killed by a mongoose, and probably several weeks earlier. It was a sad moment – this was the first male that I had deployed a tag on, in November of last year. We had followed him and female blue twice a month for four months. He had become rather relaxed in our company, often foraging unconcerned within meters of us.

The male we had seen in the company of female blue was most likely the rival male with whom we had seen the cascades male tussling on most mornings. One tragedy, another’s opportunity it would appear. We spent the rest of the day looking out for female blue, but our guess is she’s made herself a new friend. No time for mourning in nature – you’ve got to get on with life.

So here’s to you cascades male, male 206. Thanks to you we now know so much more about the secret life of Cape Rockjumpers.  He represents the first ever recovery of a ringed Cape Rockjumper in the SAFRING database.

The following photo of the cascades male was taken by project volunteer Dr Dean Portelli: 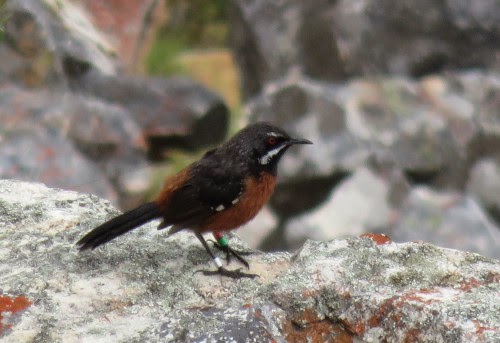