Tuesday evening, Victoria West: isolated thunderstorms march across the plains of the Karoo. Strong winds kick up dust everywhere. In the late afternoon, I had to abandon an extended count associated with the local dam in fear of a drenching. But the walls of rain are picky in where they choose to fall, and the afternoon was spent mostly in anticipation of what the dark skies would unleash. Visions of a flooded campsite and rescuing the contents of my tent did not materialise. 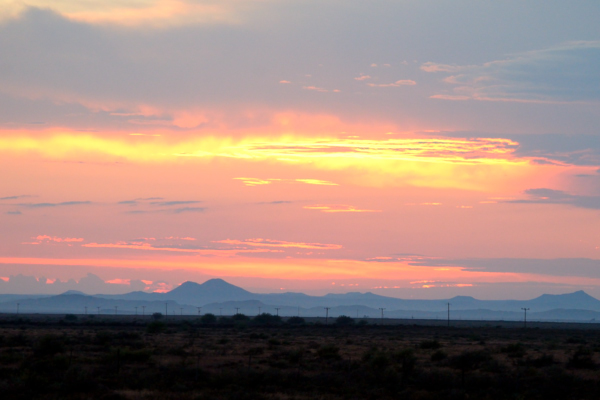 The week had started well though. For my birthday I’d booked a family cottage in Karoo National Park for the Saturday night to lure Anja away from Uniondale. The rest camp was used mostly just for exactly that – resting during the hot, dry afternoon. Sunday morning I snuck in the first point counts during a drive up the Klipspringer pass, while Anja enjoyed watching the Black Eagles launching themselves off of the edge of the canyon, swooping below us and down the valley, to return within minutes out of nowhere with a new stick for their nest. Right now this must be the most epic place to watch these birds in action. 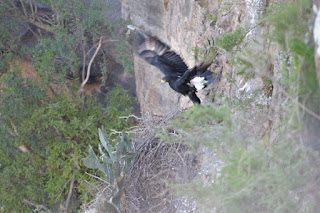 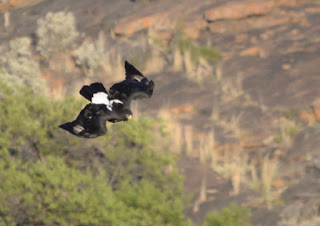 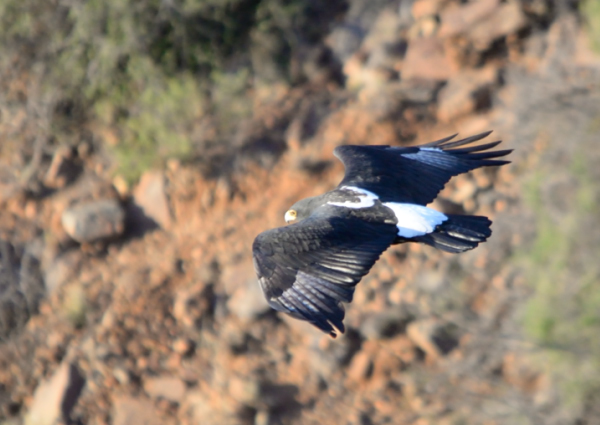 It appears that it has been some time since a good rainfall has blessed the park. Despite the dry and dusty feel, bird life was good. The bird hide revealed a Little Bittern (or the eye at least), as well as several wildlife encounters: notably a Grey Mongoose sussing out a resting Hadeda. Little Swifts filled the air in their hurry to go nowhere particular, a task achieved a lot more sedately by the camps many giant Leopard Tortoises.


With the family back on their way to civilization (as I know it), I started counting in earnest. With temperatures below 30 degrees, coupled with overcast skies, conditions were pleasant, and birds were active: each point taking an age to complete. There is plentiful tolerant wildlife in the park, which also provided many distractions between points. How can one ignore so many picture perfect occasions? 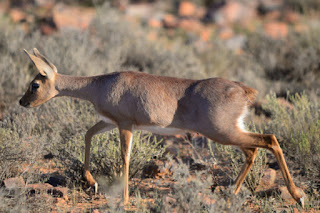 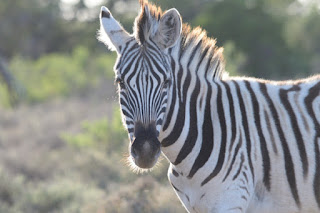 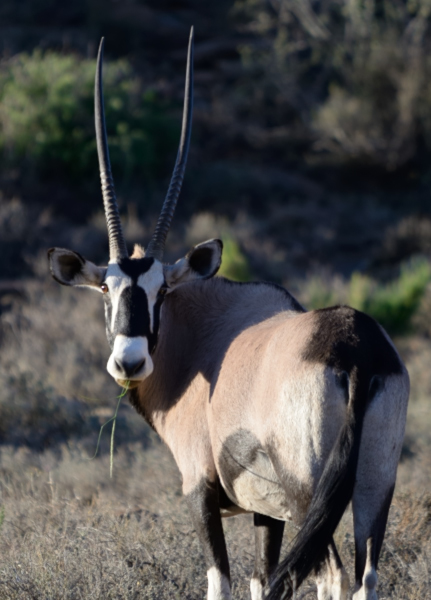 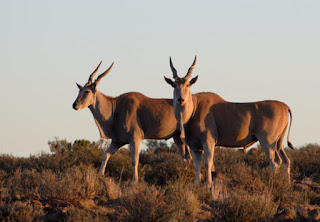 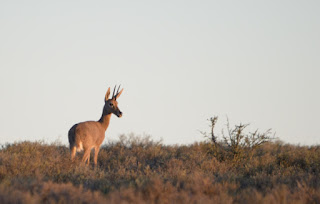 Monday morning and the counting continued on the escarpment plateau, where Sickle-winged Chats are at their most common. At 10.30 am the gravel plains were starting to get a bit reticent about revealing their occupants and I headed for the Bulkraal picnic spot. Here a pump and regular watering of the lawns mean a lot of semi-habituated birds, although the resident Namaqua Warblers proved too elusive for the lens. A particularly exciting rarity encountered there was a Faansie Peacock, author of Chamberlain’s LBJs and Waders books, and a species which can be accurately identified from the photograph on the back of the Wader’s book.


Further distractions from my make-shift office under the Acacia trees included a curious Vervet Monkey, which forced me to temporarily abandon work as it perched in the branches above my laptop, forcing an evacuation due to fear of a drenching in monkey pee. Then it was bye-bye park as I headed to Molteno Pass, which forms the eastern boundary of the pentad I was surveying. By 6pm the survey line was complete and it was the 120km drive to Victoria West, the small Karoo town that services the N12 highway traffic to Kimberley. 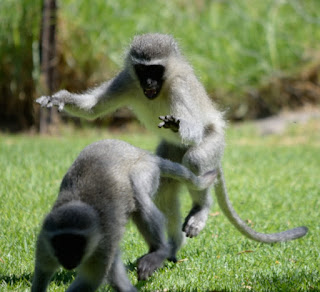 It had been 6 years since I’d last passed that way, and I was pleased to see the Lesser Kestrels are still around (reading my last post on the visit, I really had been wondering). The Paradise campsite, where I’d stayed before, was still open and I pulled in to set up my tent for the week. Passing rain showers during the evening had me worried, but proved harmless.

Then it was yet another early morning start for more bird counting. This is Lark land to be sure, with Clapper, Thick-billed, Long-billed, Karoo and Spike-heeled all on the lists within a couple of hours. A point falling at the edge of a farmstead kept me busy for over half an hour with a prolific number of birds, including a flock of 48 Speckled Pigeon drinking from a water source. But as the morning advanced, so did the wind speed. It was clear another session would be needed in order to thoroughly survey this important pentad: one of the few Karoo pentads that has more than 10 lists for the SABAP2 project, and so a vital one for trying to understand the link between bird densities and reporting rates. But as you’ve read, the afternoon weather was not so accommodating.

Wednesday morning was better, and I chose a route that would keep my back to the sun for a bit of illustrative photography. The first curious encounter of the day was watching Lesser Kestrels eating pebbles from the road. Later on I'd watch Cape Wagtail, Three-banded Plover and Shelducks harassing a monitor lizard. 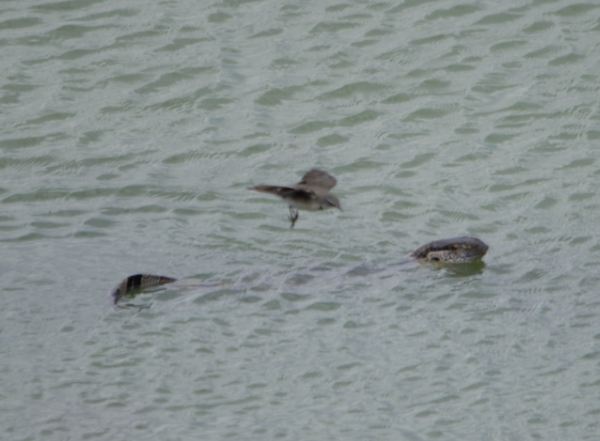 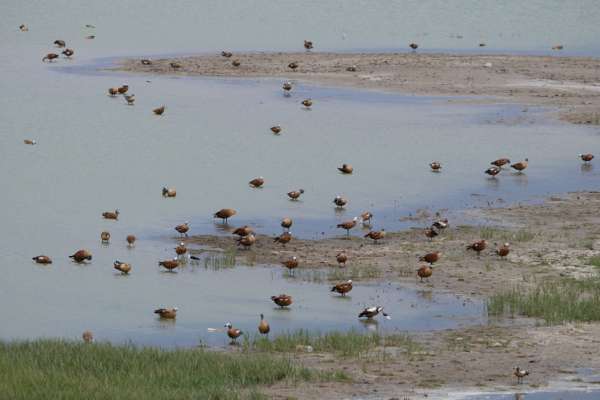 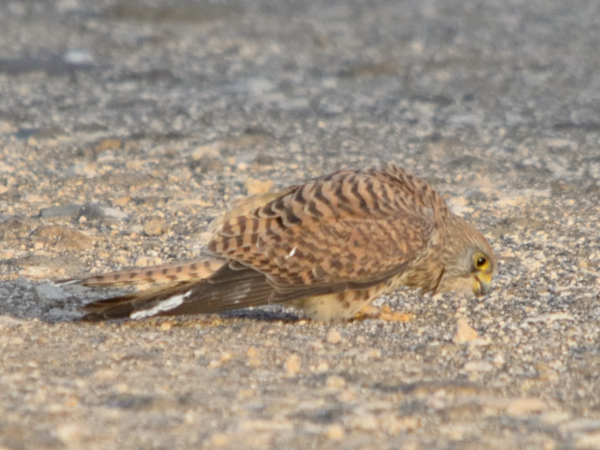 The afternoon would be my first surveys for the Biesiebult pentad. The farm owners, JR and Sandra, were well accustomed to the BioGaps research crews passing through, and were very welcoming and interested in the project. It is a sign of the size of the farms in the Karoo when the ‘driveway’ is 6km long! The farmhouse is completely off-grid, with solar panel arrays and giant Aga stove for keeping warm during winter.  While the dominant biomass in terms of birds were definitely farmyard geese (the down used for duvets), the local dam added most of the species richness to the atlas card. The rest of the farm is ‘egte plateland’ or Karoo as you’d imagine it. Still, Blue Cranes with chicks were scattered across the landscape, while further birding highlights included Secretarybird and Grey winged Francolin.

However, the main highlight was really just talking to the landowners and getting an insight into life off-grid in the Karoo and their relationship with nature. During winter, they need to put large pots of water on their wood stove, as pipes can stay frozen until 10 in the morning. And rain is always a topic of conversation. “Ons kyk vir die natuur: ons sien die miere werk, die voel bou nessies, die slange loop, dan weet ons dit gaan reen.” <We watch nature, we see the birds and ants begin to work, and the snakes becoming active, then we know it will rain>. Here for the first time I also realised that the large satellite project, SKA, was becoming an increasing annoyance to the people who live in its shadow… but more about that later.

Thursday saw me wrap up surveys on the farm, before heading to what I thought would be my next survey pentad. Unfortunately, as it is one of the ‘additional’ pentads of the BioGaps project, there had been no ground work yet, and the contact information associated with it was irrelevant. The day became a quest for access to the seemingly inaccessible pentad, made all the more difficult by a lack of cell phone reception in the landscape. However, it culminated in one of the most interesting and useful meetings of the day; one that would impress upon me my full naivety of what is going on in the Karoo.

By 5pm I’d all but given up, when I came upon another dusty road that headed in the right direction. A chance encounter earlier in the day had clued me in to the fact that a local farmers meeting was happening, so when I passed a farm with many white bakkies pulled up around it, I suspected it was a place I needed to be. After explaining my goal to farm owner Mr Hugo, I was invited in. As part of my life at Blue Hill, I attend the local farmer meetings from time to time, so the setting was familiar. Talks and conversations were about sheep, wool prices and the threat of ‘blue tongue’ sickness. But this was a meeting with a difference.

The final speaker at the group was the extraordinary Bonnie Schumann, field officer for the Endangered Wildlife Trust’s ‘Drylands Conservation Programme’. Bonnie is working closely with the farmers in the area, using the endangered Riverine Rabbit as the flagship species. Many of the farmers are part of the national conservancy program. Bonnie was an absolute goldmine of information on everything from fracking, to the impacts on people living in the Karoo of the SKA program, and perhaps most importantly for me: Uranium mining. While most of us have been aware of fracking, the threat to livelihoods and the environment posed by uranium mining have largely escaped media attention, and scale of this threat is truly, truly alarming. Read this very level-headed analysis of the problem hosted on karoospace to find out more.

For me, Bonnie’s talk before I had my 5 minutes was also very useful: one has to be very wary if one wants to be useful in effective conservation to avoid the ‘Groener’ label (Bunny-hugger), and it was great to see (ironically) Bonnie’s work with the Riverine Rabbit so well received by this farming community. I was thus a bit more confident about introducing myself and my work; and all the necessary farmers came forward to introduce themselves to me afterwards. Furthermore, I was invited to take part in dinner. There is a saying “You know you are in the Karoo when there is more meat on your plate than veggies” and that was so totally true: this was Karoo hospitality at its best.

With the diverted Thursday afternoon, it was clear to me I would not be able to undertake an effective survey of the target pentad on the Friday, faced with having to pack up my camp in Victoria West and the 5 hour journey home. I chose instead to consolidate contacts made the previous evening: I’d been especially captivated by a tale by one of the landowners of ‘living fossils’ in the high altitude pans on top of the mountains where he lived. The possibility of Drakensberg Rockjumper too sealed my interest and Abramskraal was my destination for the day.

Okkie Wiehahn and family were extraordinarily welcoming and hospitable, insisting I join them for home-baked lasagne. I’m very quickly starting to believe the Karoo is filled with the nicest people on the planet! It was interesting to hear Okkie’s concern about the growing number of Pied Crows (heard a number of times during the week), and particularly their impact on the small tortoises. Again, distances and time got the better of me, and it was clear an expedition to the escarpment would be beyond what the day would be able to handle: It’s been added to the growing list of things to do.

So, overall: while perhaps lower on point counts than desired, from an educational perspective, this was a very important week for me as I begin to unravel the issues at stake for landowners and the birds of the Karoo.

And we'll wrap it all up with a few more bird shots from the survey: