A dramatic week, with Cape Town battered by storms and the fires to the south of us wreaking havoc in Knysna: evacuations, houses burnt and lives lost in this historic seaside town. Despite that, the area is in the grips of a severe drought, with the sporadic rains from two months ago now a distant memory.

Still, my week started fairly well. I set off at 5am Monday morning to a Karoo Biogaps pentad just off the untarred R400 between Jansenville and Riebeek-east. The area was typical flat Karoo terrain, but with elements of succulent Albany thicket as evidenced by expansive stands of ‘noors’, a species of Euphorbia. The Sunday’s River, reduced to puddles, also winds its way through here. The pools of water and acacia thicket lining the river provided productive birding, with the cold early morning making way for a warm and pleasant day.

This was the first pentad where Sabota Lark would prove to be really common. Small parties were observed foraging here and there several times. White-fronted Bee-eaters provided some colour, and some nesting Rock Martins on the farmhouse were pointed out by the farmer. He also commented that he had seen Fish Eagle feeding on Angora lambs on infrequent occasions. The only raptor I’d see here would be the inevitable Pale Chanting Goshawk.

As I’d been unsure as to accessibility across the pentad, and the amount of time I’d need to survey it, I’d not made accommodation plans for that night. However, the farm tracks and dry conditions meant easy access across the pentad, facilitating timely completion of the survey come 5pm. I’d noticed the Darlington Dam was relatively nearby, and having never been there decided it would be a worthy place to explore for accommodation options.

I was somewhat (pleasantly) surprised to find that the dam falls under the jurisdiction of Addo Elephant National Park. However, unlike the main Addo section, things at Darlington are a lot more informal – there was no ranger at the gate, and I had to hunt around the houses to find someone who’d take money for entrance or camping. This proved to be very cheap – R60 excluding conservation fee, which must make it the cheapest SANPARKs camping fee of any of the national parks. I’d later find out that this is perhaps because there are no showers or running water: there is no ablution block along the lake edge to which I was directed. Toilets are very dilapidated and dirty long-drop toilets scattered along the lake edge. It is not surprising that there is toilet paper and poo behind most bushes, but the piles of litter were inexcusable as bins are provided. Darlington Dam is probably best known to the angling community, some of whom clearly need to clean up their act. Navigating catfish heads, shit and the litter along the lake edge is a putrid affair.

Enjoying the lake edge at the campsite was not what I was there for of course: the birding would make up for all that. Spotted Eagle Owl had already greeted me as I’d tried to navigate the un-signed tracks in the evening winter gloom to somewhere legal looking to put up my tent. Waterfowl and Water Dikkop bickering provided backdrop noise all night long. During the cold, long, pre-sunrise dawn was when I took my walk along the dam edge, where Red-billed and Cape Teal paddled off at my approach, Egyptian Geese and Shelducks complained loudly, and a variety of other birds provided distraction from the legacy of human presence. As a bonus, I was the only person there.

With the rising of the sun it seemed like a good time to go for a drive to explore the rest of the pentad outside the sturdy electric fence demarcating the camp area. For those more interested in game than birds, Jackal, Vervet Monkey, Baboon, Kudu, Gemsbok, Kudu, Rhebok or Reedbuk, Duiker, and Springbok were all seen. Meanwhile, birds of all sorts were non-stop along the water edge. I was surprised to see Cape Bulbul rather than Red-eyed Bulbul, and Karoo birds were generally lacking from the lengthy bird-list, despite the obvious suitability of the habitat. With 80 birds for the 4-5 hours birding, this is easily a site that could produce 100 birds for the day with a few more hours at this time of year, and probably a lot more with the summer migrants.

However, I had meetings in Grahamstown to get to, but on balance, I could have done with at least another day here. Addo clearly have big plans for the area, with a seemingly endless tract of sturdy electrified game fence stretching along the main dirt road. If elephant and lion aren’t there already, they will be soon. 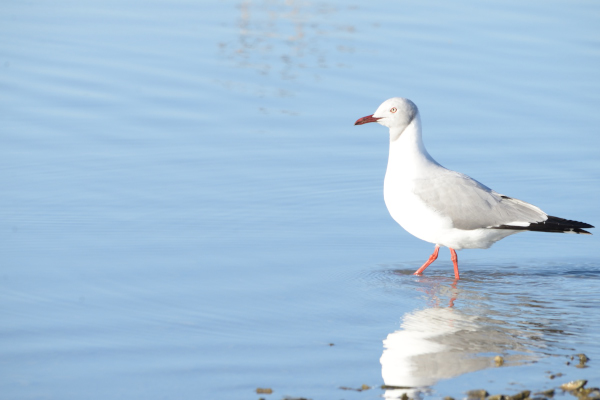 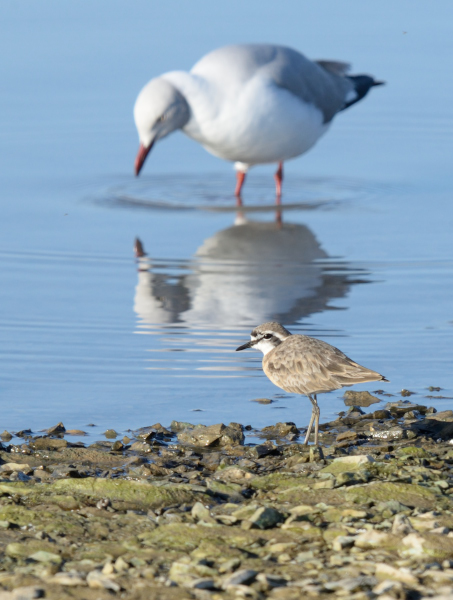 Oh yes, despite this rather alarming warning sign, I did not see or hear hippo, or see any tracks. If that is because they simply avoid the human habited lake section I cannot say. 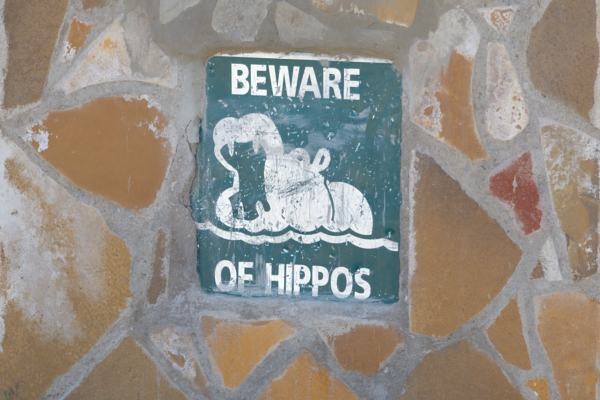