A look of the atlas coverage map of South Africa has for years shown big unexplored areas in the heart of Bushmanland: that area south of the N14, between Upington and Springbok, and north of Louriesfontein. It is a sparsely populated area, with few protected areas to attract tourists and the associated birdwatching crowd. The big drawcard species to the area, the Red Lark, can most easily be seen close to the N14 at Aggenys, so there is little reason to venture into the vast hinterland of South Africa. That would include me: the last time I was in the area was in 2006 on a road trip to show off the wonders of the country to my German fiancé. But now, tasked with the daunting conservation assessment of our Karoo bird species, it was imperative that I familiarize myself more intimately with the region and its species.

I knew I would be away for the 3 weeks, so felt it was important to get some quality time in with the kids, and give the wife a short respite since parenting duties would be all hers for the interim. So I left home on Monday the 30 April, first on a family trip. We’d planned to head out earlier, but Eli had a bad cough and we decided to cut short our stay at Nature’s Valley campsite. The hikes through the forests, fynbos and along the beaches were refreshing, albeit evenings a bit chilly and the campfire much needed.

Too soon we were all back in Uniondale. And that was the start of the long road trip. Wednesday was a drive to the Overberg, to the Haarwegskloof Renosterveld Reserve , in order to give some moral support to Celeste de Kock doing point counts to determine distribution and density of Agulhas Long-billed Lark. Then Thursday the drive into Cape Town, with meetings all day on the Friday (at SANBI to touch base with Gigi Laidler of Karoo BioGaps, as well as Dale Wright, and at the Fitz to meet Rob Thompson, Rob Little, Res Altwegg and Dominic Henry). Dominic gave an impressive display of distribution maps using occupancy modelling which are the results of the point counts from the southern Karoo. It was really cool to see the efforts of last year being used to fill the information gaps for this under surveyed Karoo region.

A big reason for the trip to Cape Town was to give a bird course on Fynbos birds to the Cape Bird Club and share lessons learnt from 5 years of postdoctoral research on the topic. That was a bit of a rough ride: I was now in the grips of the flu/cough thing Eli had, and I was staying at a Backpackers, where I spent a near sleepless night on the Friday. Then on the Saturday, there were all sorts of technical issues with the presentation setup (mics not working and having to run off-stage in order to change slides and presentations). Luckily, the audience was sympathetic and patient. The afternoon was just a long nap and some bird watching to chill out, and a much needed early night and looooonnng sleep.

Sunday was an early start to meet Susie Cunningham to work over a manuscript that needed fixing for resubmission, followed by a quick social visit to old friends. Then the drive to Hopefield to pick up Eric Herrmann, field assistant for the next couple of weeks recce trip across the western Karoo.

Our first night took us to the Botuin Guest house in Vanrhynsdorp, run by Salome Wilemse, of the Namaqua Bird Club. It was so nice we had to make some excuses to spend a second night there. After all, Vanrhynsdorp is gateway to the alluring Knersvlakte and a trip up the Vanrhyn's Pass takes one from Succulent Karoo to Fynbos in less than an hour. Salome was a fantastic guide, showing me some pentads with representative birdlife for the area. One of the pentads included a farm where an old friendly farmer, Willem van Zyl was struggling to make a living with the ongoing drought in the region. He boasts that he has the oldest Wild Olive tree on his farm: a massive tree that was apparently already huge when his father was a child, going back 100 years.

On the Tuesday we had to move on. Eric and I surveyed a potential pentad on the foothills of the Vanrhyns pass, which included the ‘Bagdad Café’ – certainly useful for the mid-morning cup of coffee. The pentad includes some of the famous Knersvlakte, the quartz gravel plains which hide a multitude of endemic succulents.

For our lunch stop we decided to drop in at the Oorlogspoort Nature Reserve, on the escarpment. The fynbos made a nice break from barren Karoo plains. Oorlogspoort has a series of overnight hikes, but being the wrong biome, unfortunately this could not be a study site. The reserve entrance was manned only by baboons, making me wonder about control and access to this bastion of biodiversity.

We had an afternoon rendezvous with Francois vd Merwe to make, a farmer just outside Calvinia.  Francois has a long history with the FitzPatrick Institute, and was very welcoming and supportive, suggesting a multitude of sites for exploration, as well as organising us accommodation in the Boekhuis ‘writer’s retreat’ in Calvinia. This would make an excellent base for exploring virgin pentads to the southeast, on farms overlooking the Tankwa Karoo. We were a bit concerned our 2x4 would not make the Bobbejaanspas, but the track proved to be in good condition. I couldn’t resist mounting up the mountain bike for a bit of adrenalin pumping downhill, with Eric taking the more cautious drive down. At the end of the day, a long round trip saw us submitting the first full protocol lists for two pentads, as well as several ad-hoc lists.

Our next destination was a farm that is now the site of a wind farm north of Loeriesfontein. After the necessary induction to access the wind turbine areas, we spent the afternoon on an exploration of some old farm tracks, which turned up the first Red Lark of the trip. We camped near an abandoned farm-house, with views of the Sishen train line. To kill some time we decided to count the carriages on one of the trains, getting to over 300 before getting bored.


The next morning we were up and packed early, as we’d noticed that the area south of Pofadder was full of unsurveyed pentads. Eric cycled through two of these, while I drove further north and did another two. Unlike the areas to the south, this part of Bushmanland had received good summer rains: the grass was tall and water filled the normally dry, salty pans. Lark-like Buntings, Grey-backed Finchlarks and even Stark’s Lark were abundant. Red Lark were recorded in all four pentads. While we’d been thinking of doing more in the afternoon, a very strong westerly wind picked up, sending the birds for cover. We pushed on to Pofadder, where we rendezvoused with Pieter Jan. He has a contact from a neighbour of mine, his mother having grown up in the area I now live, Hartbeesrivier.

For camping we headed for Klein Pella, a date farm that also has accommodation, close to the Orange River, the granite mountains that wind west to form part of the Richtersveld. The area was looking rather beautiful, with grass, flowers, and myriads of nomadic birds. We’d planned to scout Pieter Jan’s farm early the next day, but got side-tracked with the birds at Klein Pella, with Eric and I clocking close to 50 birds each in our 2.5 hours. This time I had the bike, and enjoyed an amazing ride down to the Orange River. I’ll say I wasn’t too sad when later that morning Eric, who was worried I’d not made it back to camp (due to the birdlife), decided to head down to see if I was in trouble.

After scouting the target pentad, which had the usual flocks of nomadics, we headed down the road to Springbok and the campsite just outside town. The Goegap Nature Reserve nearby provided rewarding birds and promises to be a fun survey site come July/August: although apparently we’ll need to book well in advance as the place is packed come Namaqualand flower season.

From Springbok the road to Port Nolloth provided another survey opportunity, with a community accommodation option just at the top of the Anenous pass. The pass proved to be another irresistible down-hill biking opportunity, although I got sidetracked at the bottom by some Karoo Larks. Of course this is the start of Barlow’s Lark country on the map. However, good sightings left us pretty confident that the pass is still firmly Karoo Lark country.

At the museum at Port Nolloth, it was interesting to learn of some previous monitoring of Barlow’s Lark nest sites just outside of town. However, what became of that research, the curator’s daughter did not seem to know. Eric scouted the town pentad, coming up with several Cape Long-billed Lark groups, as well as Red-capped Lark and Capped Wheatear foraging on the kelp covered beaches. No Barlow’s Lark though.

So, Monday morning we headed north on the road to Alexander Bay. Thick fog kept us pushing far along the road, until 30km south of Alexander Bay we decided to follow a track that ran off the main road, but down the mining fence, in beautiful Succulent Karoo veld, resembling an underwater coral field. Here finally, the rattle call of what could have been a Karoo Lark revealed birds with plain, unstreaked flanks: Barlow’s Lark! A little later on, with the assistance of some playback of Eastern Long-billed Lark, a Cape Long-billed Lark responded beautifully, allowing great views and a few photo opportunities of this really long-billed beauty. Apparently it is not just to human ears that these calls are so similar.

That afternoon we explored a targeted pentad south of the Richtersveld region. Although only 15 km or so inland from Barlow’s Lark range, the sands here are red, rather than beachy-white, and we were back into Karoo Lark territory, with birds reddish and typically streaky. Amazing how quickly the forms of birds transition in this area.

Tuesday was an exploration of the back routes to the Namaqua National Park. A highlight of the morning was summoning another Cape Long-billed Lark with the call of Eastern Long-billed Lark, although I failed to get a much desired photo of this pale bird against striking Namib red sands.

Our entry into the Namaqua National Park would be described as confusing as best. The northern boundary (clearly obvious due to the presence of a tortoise-killing electric fence that spans this and many other SANParks reserves) is not manned, with no directions to any reception of any kind. Ironically, the parks signature campsite on the eastern boundary is called Skilpad (Tortoise). We eventually found the reception here, after spending a day revelling in the scenery of the hills that lead to Kamieskroon. While the park does not itself offer camping at the Skilpad reception gate, there is camping offered by Skilpad Farm immediately adjacent.

Eric and I spent what was left of the afternoon walking the ‘Korhaan Trail’ practising point count methodology. No Korhaan though. And that was a wrap: the next morning I set out for Kamieskroon on the bike, Eric picked me up along the road, and drove us all the way back to Hopefield. I had a few more hours on the road to get to Cape Town, where I was kindly hosted by Dale and Este Wright. Thursday was an action packed Fitz AGM, and Friday the long ride home.

Some further images from the trip: 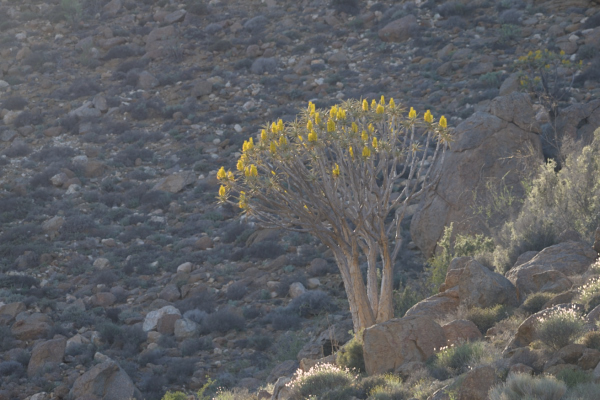