Of Miracles and Misery in Bushmanland

Of Miracles and Misery; in die wye Boesmansland

There was moisture in the eyes of the grown men sitting around the table of the Uitkyk farm somewhere between Gamoep and Aggenys. Although we’d met Albert and Derek only that afternoon: we were complete strangers invited in for coffee after asking for directions; now we were hearing stories that sang to the soul. Stories that reminded me of what it is to be human, what it is to belong to a community.

Bushmanland, or the Thirstland, is a tough place to live. Sometimes the rain doesn’t fall for years. When the rain comes, it can bless one farm, but pass over the neighbour completely, causing soul searching: what have I done to annoy God this time? or is this another trial of the biblical kind sent to try Job? One year the veld is green, the sheep are fat, and you’re buying a new bakkie for you and another one for your wife. Now you can fix this fence, and repair that windmill that the East Wind has blown the blades off.

Then it is back to normal – baking dry: the veld is dusty and grey; and the rooi jakkals are becoming cheekier and more abundant, happily killing 10 sheep in a night because the sheep are too tired and too weak to run anymore. You’re digging into savings to buy food for the livestock, holding on with hope: maybe this year will be a good one. For many it isn’t, the debt builds up to levels greater than the value of the land and its assets. Many farms stand empty now in this part of the world, there is no longer a sympathetic government willing to come to the rescue: their drought relief comes reluctant and late, if it comes at all.

It has been a long drought in the Northern Cape, running to many years in some places. For Albert and Derek, cousins who have been farming the Thirstlands for generations, the end was in sight. Albert had literally R600 left in the bank. Then one day a stranger was doing the rounds, promising to help if he could, getting bank details, including those of Derek and Albert.

“I wonder what he will give?” they thought to themselves. “Even if it is R10 000 that won’t hold us over for very long”. Later that week Albert went to Aggenys to draw the last of what he had, his last R600. He couldn’t believe it, first the SMS from the bank: a deposit of R100 000. Surely, he was misreading and there was an extra 0 in there? But sure enough, getting to the bank, that was the amount that had been deposited, not just to him but also to about 5 farmers in the area. And who was the mystery donor? To this day nobody really knows, but it has kept these men on the land, a roof over the heads of their families, and food on their plates. We’d heard of similar stories when R3 million of feed had been sent to Kammieskroon district. Grown men literally were in tears of thanks.

Later in the week navigating the farm roads off the Luis 10 road, which cuts like a knife across the Bushmanland scrublands in the direction of Brandvlei, we come across a farmstead in the middle of nowhere. Sheep were eating green feed in a lot near an old reservoir, and an elderly farmhand waved us towards the house, saying the owner was home. Outside the house a massive black boerboel with wolf-like yellow eyes barked and pranced. Of course, opening the door of the BirdLife bakkie the threatening beast was really just an over-sized excited puppy.

The farmer emerged from the house, thin, salt-and-pepper stubble, and although only a year or two older than me his leathery face was a weather-beaten road-map that showed a rough journey through time. He is a far cry from the EFF effigy of the red-faced boep-pens boer. After accepting the customary invitation for a cup of coffee, our cursory question equivalent of ‘how goes it’ was greeted with a disgusted ‘No man, I must sell: the rain just doesn’t want to fall on me. Come in, but please excuse the mess: my wife’s mother has had a stroke and she is trying to organise her a place to stay in the old-age home, but it is difficult’. With 9000 ha, he is a ‘klein’ boer, a small farmer, in this part of the world. He grew up on these dusty plains that stretch eastwards from Springbok, the northern boundary the N14 through Pofadder towards Upington. He went to school with Derek, but unlike him didn’t receive the life-line of a passing angel.

Once the coffee is on the table in the cold room, he adds ‘Last week jackal killed 8 of my sheep in one night’. He glances heavenwards, cheeks stiff, offering a brief glimpse into a world of pain that we are ever likely to know or understand. I’ve seen that look before; a few weeks earlier at the kitchen table with an elderly boer-vrou. Talk had been of rain, how the previous year they’d received less than 40mm for the entire year. In an attempt to joke I’d said, “with these changes in the weather, its hard to know if one needs to be more worried about climate change, jackal or Malema”. She too had glanced skywards, “Our future is in the hands of the Lord; only he knows what he has in store for us”. Certainly, skywards is the only place many have to look now, in hope. 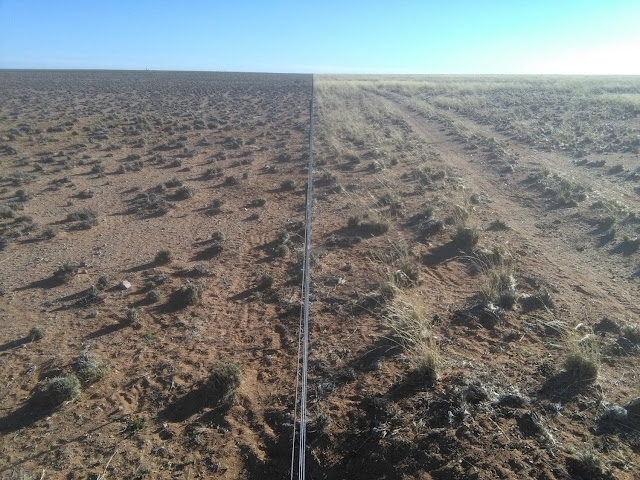