A small man on Mannetjiesberg

I never thought I would ever climb a mountain covered in snow in the middle of winter wearing just a t-shirt. My backpack was stuffed full of winter weather clothes, but we never needed any of them. Some time ago Charlie had mentioned that he would like to climb Mannetjiesberg, the highest peak in the Kammanassie mountains. Anja suggested to him that perhaps he would like to do that for his birthday, as in the age of COVID birthday parties are a little bit hard to organize. Charlie was delighted by the idea and so we started to lay out plans. 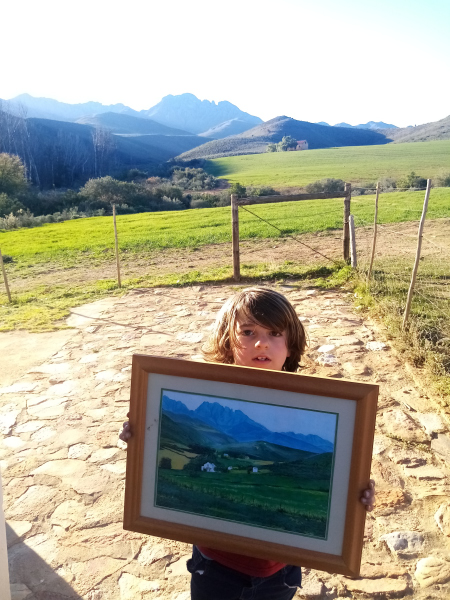 The Kammanassie mountains fall under the jurisdiction of CapeNature. I obtained the permits from the local office in Uniondale in exchange for the promise of bird list contributions. One also must traverse private property owned by the Woudberg family to access the reserve. So, we decided to book their guest house at the bottom of the mountain. Currently this is managed by Estelle Gilles: landsrivierselfcatering@gmail.com.

Mannetjiesberg stands at just shy of 2000 meters at 1995 meters above sea level. Previously Anja and I had climbed the mountain hiking all the way from the guest cottage. However, neither of us are as fit as we used to be and with Elena 10 and Charlie turning 8 on the day of the climb, it made sense to drive as high as possible up the mountain. 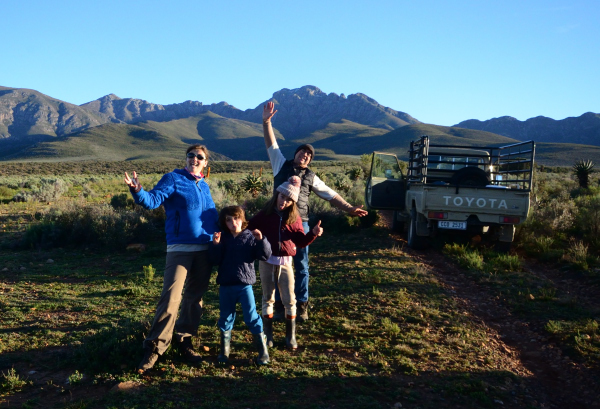 On Saturday morning, after warming ourselves by the fire in the guest cottage, we packed the Land Cruiser and started the trek up the mountains. We parked the vehicle on the side of the road at one of the few places where the four by four track allows vehicles to pass. The vegetation was quite a bit thicker than on our previous ascents as it has been several years since there has been a fire. Large stands of bearded protea cackled with Cape Sugarbirds. Orange-breasted Sunbirds flitted around us beeping and tweeting wondering what these strange beings were trespassing on their territory. We decided to navigate the first ascents over a rocky scree slope despite the fact the boulders might be loose. This was a wonderful playground for the children who scampered way ahead of mommy and daddy. By the time we reached them at the top of the scree slope, they had built a Little Rock jumper snowman. Or should I say snow bird. After more biscuits and snacks, we had to make for the Ridge. 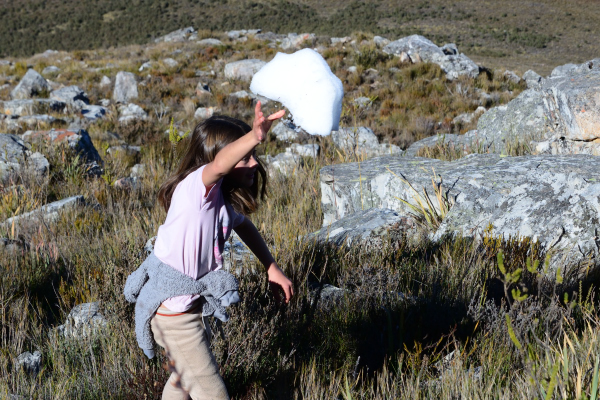 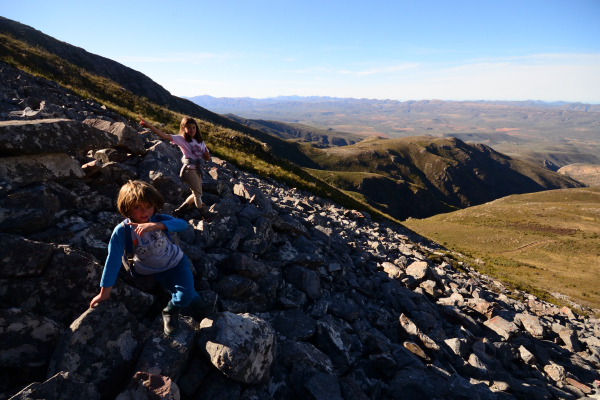 Drifts of snow were becoming more common. By this time, we had stripped of all our outer layers of clothes down to our T shirts. It was strange to be walking through snow in T shirts, but the shade of the South slope protected icy patches from the melting sun - the temperatures were easily in the mid 20s due to a Berg wind blowing in hot air from the north. As we ascended we had to navigate some of the rocks covered in treacherous black ice. Moving through the snowdrifts was tricky especially for Charlie and Elena, who had only welly boots which would frequently fill with ice and snow. Eventually we crossed the Ridge to the northern slope which was free of ice and made the last assault on the summit . The children were delighted to finally spot the distinctive mirror covered beacon that marks the top of Mannetjiesberg. It had taken us 3 hours from the vehicle to reach the summit, where we spent half an hour having a picnic while soaking in the views and drying out socks. To the South, the Tsitsikamma and Outeniqua mountains, to the north the Swartberg and to the east we could make out our very own Blue Hill. 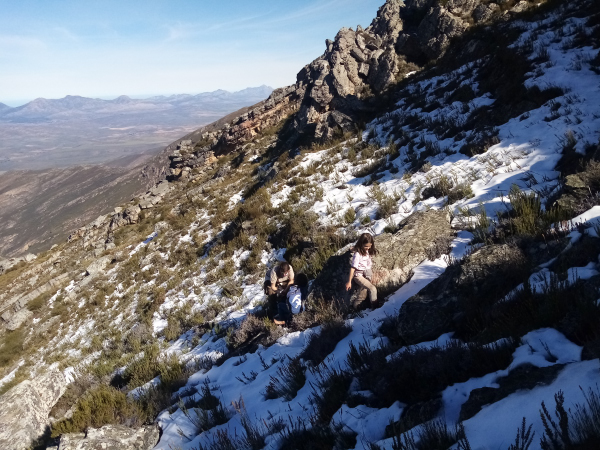 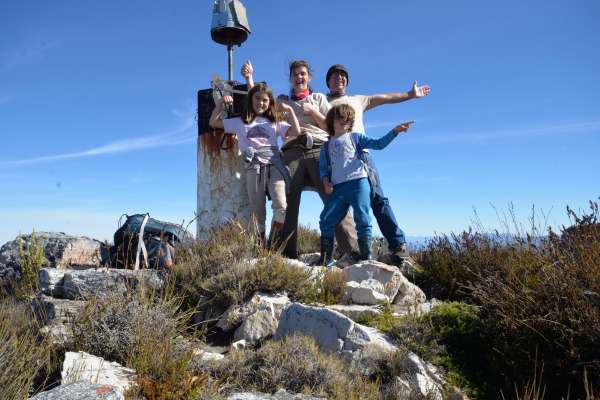 For the descent we decided to stick to the northern slope to avoid the snow. However, this would take us into uncharted terrain and would be quite a bit longer than our summit route. The going was easy over tussocky restios and Watsonias. I would scout ahead to ensure that our route was not leading us to any precipices or cliffs. Eventually we had to switch onto a South facing slope but by this time we were low enough that the snow was no longer a challenge and provided relief to those who had spiked their hands on thorny bushes during the inevitable tumbles, the product of weary legs, too much speed, and steep and uneven ground. By this time, we'd been out for over 5 hours, and everyone was very tired. We chose a well vegetated steep ridge-line for our final descent to the mountain track, allowing us to slide down the vegetation wherever possible: but this did mean that most of us had shredded trousers by the time we were on the track. Once we were all in the vehicle and ready to head back down to Uniondale we'd been out for six hours.

Again, it was surprising that for the middle of winter we had been able to fulfill Charlie's wish, the angels must surely have been smiling. While an Internet search does not reveal any other summits of Mannetjiesberg by children this young of course digital records do not go back far enough for us to guarantee that he was the first boy of his age on the mountain. However, I am very sure that he is the first boy of his age to summit the peak in the middle of winter.

Which peak next? Peak Fomosa apparently…. As I write my leg muscles send painful reminders they are not what they used to be and I’d better do some training to be able to keep up with this young and avid mountain climber.