How do you catch a Leopard?

We currently have a walk through cage on the property, courtesy of the Landmark Foundation (LM). A walk through cage is a bit like a walk-in cage (see How to catch a baboon, posted previously), except there are fall-down doors on both sides of the cage – it looks a bit like a tunnel. They don’t always work though… if an animal is light or steps over the trigger plate.
So, a couple of months ago our camera traps revealed the presence of a big male leopard. This leopard had been collared by LM previously. The collar contains a tracking device. Now the leopard needs to be recaptured so the collar can be removed and the information on the leopard’s movements downloaded and analyzed. You can tell a lot about leopards from their movements. Most obviously, by mapping out an individual’s locations you can map its territory and preferred habitats. You can also tell how often they are making kills since they don’t move much from a spot after making a kill. You can also guess at the size of the kill by seeing how long the leopard spends in one spot – the longer he spends somewhere, the bigger the kill is a general rule of thumb (but that is influenced also on how long it was since his last kill and what the last kill was). In the case of a female, periods of over a week centred on a central point indicates that she has had a litter of cubs (usually one or two). 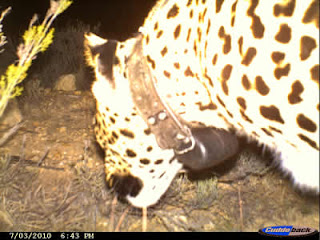 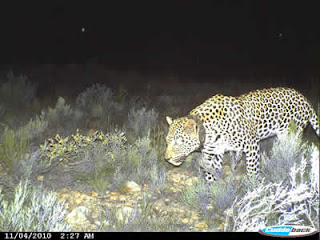 A male territory typically encompasses several female territories. Preliminary data suggests that the territories of male leopards of the Baviaanskloof (estimates are that there are about 25 in the 200,000ha area) can be as large as 60,000ha. These are the largest leopard territories ever recorded. The reason is that Fynbos is nutrient poor, so livestock carrying capacity (the total number of the mammals) is low. So a leopard has to go a long way looking for a meal. The role of persecution has also to be quantified – as leopards demarcate their territories based on territory boundaries of neighbouring cats. If there are no neighbouring cats of the same sex this means that there is no natural limit to their territory size.
Hopefully when (or if!) we catch this leopard we will be able to tell you a lot more about the leopards of Baviaanskloof.