Little Karoo Dwarf Chameleon (Bradypodion gutturale)
Dwarf chameleons are small – up to 10cm excluding the tail, which can be as long as or longer than the body. The Little Karoo Dwarf Chameleon has a dorsal crest that extends the entire length of the body and down the tail, giving it the appearance of a mini-dinosaur. Naturally their colour varies according to their local conditions and temperament. Angry chameleons can turn almost black. 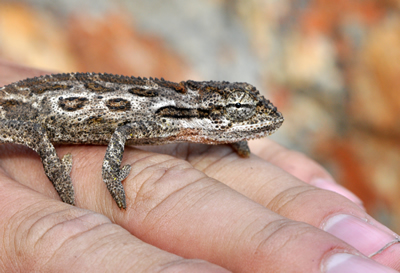 The range of the Little Karoo Dwarf Chameleon according to Bill Branch's Guide to Reptiles of Southern Africa, is fairly well delimited by the extent of the Little Karoo i.e. from Uniondale to Ladismith from east to west, and between the Great Karoo to the north and coastal plain to the south. This makes it a South African endemic. There are 14 other chameleons in the genus. 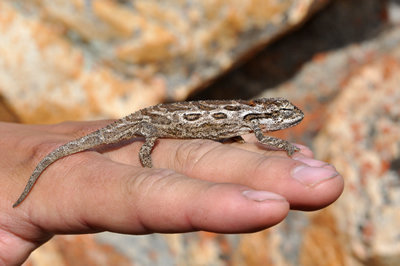 They catch their prey by waiting in ambush for passing insects and by flicking out the long tongue – which is the length of the body. Dwarf chameleons can be hard to find in winter, leading to the theory that they may hibernate underground. This is the first Dwarf Chameleon I have found on Blue Hill Escape. 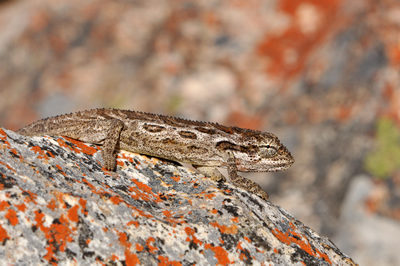