17 February – start of phase 2 - After finishing the Baviaans section of the survey, the bike was in need of some serious first aid. So a trip to George was needed in order to purchase a new tyre for the back wheel and trailer. Willie Marx, one of George’s cycling legends who now runs a bike shop, gave me a handy discount – on tubes and other supplies. Then it was off to the dried produce section at Pick n Pay to stock up on more dried fruit, packet soup, instant noodles and Imana soya mince. It may not taste good, but it doesn’t weigh much or take up much space, and most importantly, it’s very filling. Okay, you would not want to share a tent with me, I don't even like sharing with myself! I also budget in a chocolate bar a day (only when I’m cycling!) and a litre of Game sports drink – those are the treats.
The rest of the afternoon was all about packing and trying to squeeze in some family time.
The 18th started with a dismal attempt to fix our internet, resulting in me burning out an inverter. On that positive note, it was time to head off. Since Anja needed to do some shopping in Uniondale, and I’d already cycled that section, I decided to hitch a ride. More copies of data sheets were needed along with a few last minute items.
Then it was off to the Kammanassie Mountains. I was headed for the Mannetjiesberg section first. Mannetjiesberg is the highest peak in the Kammanassie, at 1956 meters above sea level. The Kammanassie Nature Reserve, managed by Cape Nature, is almost restricted to the highest parts of the mountain. To access the reserve one has to cross private land. The farm to the south of Mannetjiesberg is managed by Willie Woudberg, who also has two cheap but lovely self-catering houses (called Lansrivier) at the start of the 4x4 track up to Mannetjiesberg. I dropped in to say hi, and he is generally amenable to giving permission to cross his land even if you are not staying with him. If you are planning a visit to Mannetjiesberg, its generally polite to advise him of your intention to do so, as well as to obtain permission to enter the reserve from the reserve Manager, Philip Esau. Probably due to this complicated access issue, as well as to the remote location of the reserve, there are no formal tourist facilities on the reserve. However, a shelter with toilet are to be found nestled in a pristine fynbos valley to the west of the Mannetjiesberg track. Water is from the little stream nearby. This was my destination for the day, where I set up camp to the sounds of cheerful Sugarbirds, Sunbirds and a Protea Seedeater. Despite the cold weather, I am optimistic for tomorrow’s survey.
18 Feb. 12 – and the survey was a good one, despite starting out at 8 degrees Celsius. Although I was disappointed not to pick up Cape Rockjumper in the morning, lots of other interesting birds were seen including Black Harrier and Common Quail. I went on a bit of a tangent to try find some caves, to no avail, but did find a seep in a rock shelter where it appeared Cape Siskin and OBS were drinking. That is where the close up photo of the female OBS was taken. I then cycled back to camp and had sardines on bread for lunch. Then I sat in the bushes to try and get photos of birds drinking in the stream at the camp – Protea Seedeater was very close, but the light was bad and the birds were nervous. I ended up sitting in a bush next to a flowering Protea punctata, and was pretty pleased with the results – including a very close male Orange-breasted Sunbird and Karoo Prinia. Unfortunately a Victorin’s Warbler that was popping around in the underbrush escaped the lens.  Time flew and it was time to head out of the valley for a bit more survey. Yay! Rockjumper on the 3rd point. Not in the mood to mission further down the hill, I thought I would try to catch up with email, but the 3G device would not connect.  So, leaving my views of Uniondale behind, I bounced back on the bike to camp for an early dinner and some photo downloads. 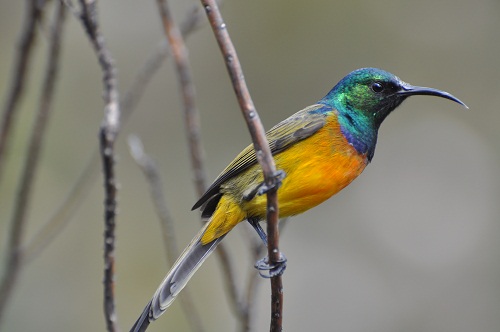 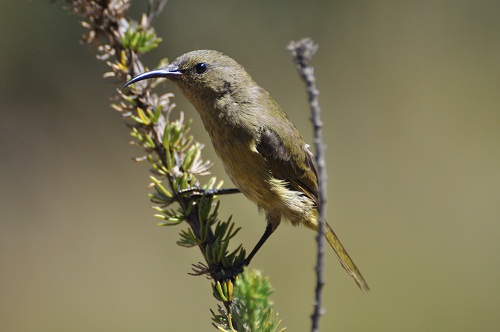 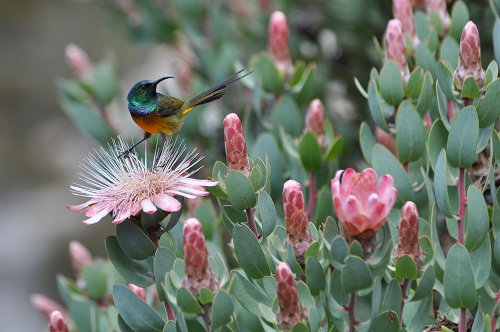 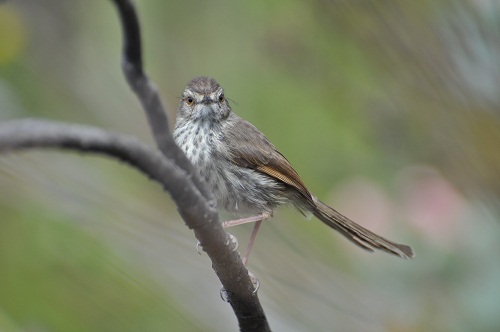 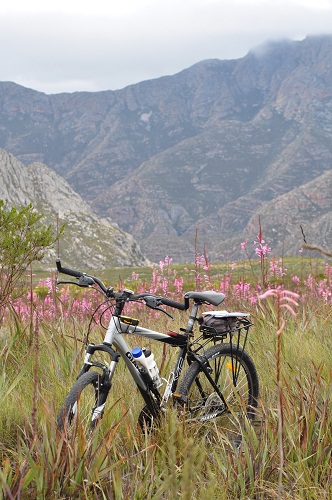 As I sat in my tent writing this I heard an eagle-owl calling from the distance. Just him and me up here - no-one else.
Today, 22 Feb, I am on the Swartberg mountains, overlooking Meiringspoort. Its been a lot of cycling and surveying in between. The second day in the Kammanassie saw me set off early, with trailer loaded, to survey down the mountain and back into the Oervlakte. Around 10:00 I was feeling a bit woozy – every breath seemed to dry instantly in my mouth. I checked the thermometer – 35 degrees in the shade, problem being I mostly was not in the shade. Time to head onwards! I stopped for lunch in the first shade I found, some poplars in a dry stream. After sardines on bread, I was able to drink my chocolate bar.
Luckily some friends lived only a few kilometres further down the road, and I was able to stock up on water and sit out the rest of that scorching day until the late afternoon. I then headed on in the cooler weather. My destination, a second transect line on the Kammanassie towards Kammanassieberg. Most of that ground is private land, and I was granted access by the land owners for permission to camp on the Klein Rivier. I arrived with the sunset, and set up camp in the dark.
The Monday was the survey up to the Kammanassie. All went well, as at least I was heading up into the cooler mountains! I reached Platberg by midday, and with ‘time to spare’ before the afternoon survey I decided to head to the top of Kammanassieberg. It took an hour, but the views were spectacular. This is the second highest peak in the Kammanassie range after Mannetjiesberg and with clear skies I could almost see the sea towards Plett. Highlights for the day – two Rockjumper encounters!
Tuesday. Another hot day out of the Kammanassie towards the Swartberg, with De Rust my stock up destination before heading to a campsite at the entrance of Meiringspoort. 70km of dust and sweat – I’m starting to think I’ve had enough of the sun – there is only so much sunblock one can carry!
And here I am, on top of the Swartberg. Highlight of the day – a pair of foraging Protea Seedeaters. Next stop Blesberg at El Yolo.