So stage 1 of the cycle survey is complete! On 31st January I set off from Blue Hill, all loaded with camping supplies and survey equipment. Thunder rumbled in the distance and rain clouds hovered over the Kammanassie Mountains. There was a defined air of trepidation and nervousness on my part. Still, these would be conditions I would have to face atsome stage, so I gritted my teeth, clenched by butt and headed towards the lightning and dark clouds. But nature was with me on this day; the clouds parted and the wind blew me towards Uniondale. 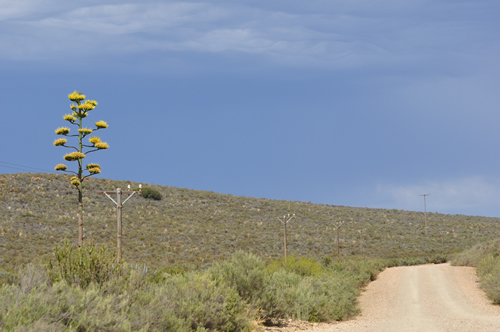 That afternoon I decided to head out along the old Uniondale Pass, the old wagon road, most famous now as it is the steep ascent that leads out of Uniondale during the Karoo to Coast cycle race that is held every year in September. And so the first points were conducted, before the veils of rain being dragged across the heavens approached too close and it was clearly time to head to the shelter of my cousin’s home – my sanctuary for the evening. The next day dawned misty, but there was no holding back. It was surprisingly chilly for the 1st of February, and my rain jacket was well used. My reward for the first day of survey included not only spectacular views of the Oorvlakte, but also records of all the six Fynbos endemics. A special day indeed – as I have yet to record Cape Rockjumper again until now, and Protea seedeater has been recorded only once more. Other special sightings for the day included a pair of Denham’s Bustards, a flock of Grey-winged Francolin, and an Rufous-chested Sparrowhawk. With the grey weather, bird activity stretched out into the morning, and I headed beyond the hamlet of Avontuur towards the northern slopes of the Outeniquas – the start of the Prince Alfred’s Pass. 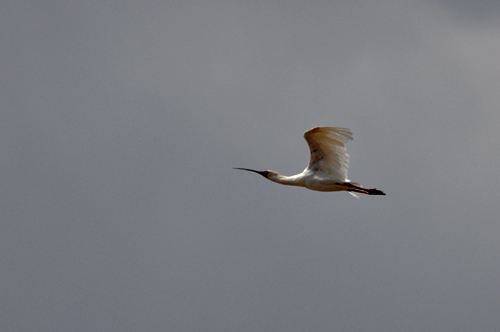 Eventually the grey, wet weather defeated me and it was time to free-wheel down the Uniondale Poort back to Uniondale and a friend's birthday celebration. 2 February - a 5:00 departure took me up the Poort, my first serious uphill, to the start of the Prince Alfred’s Pass. All too soon, despite a promising start that had me wondering how I could count all the Cape Sugarbirds in one prolific patch of Proteas, the rain became too much. I decided it would be best to continue to my selected base – the Outeniqua Trout Lodge, set up camp, and to wait for the weather to break. But it would be a long wait! Naomi , lodge manager, kindly moved me into one of their tipi tents to save me from the rain. Naomi and Ingo have been running the lodge for many years. They generate all their electricity from hydro power and have a very active permaculture project. They have realised that the future is not in trout! as the warming waters of the Keurbooms river are no longer suitable for trout, which need cold waters. 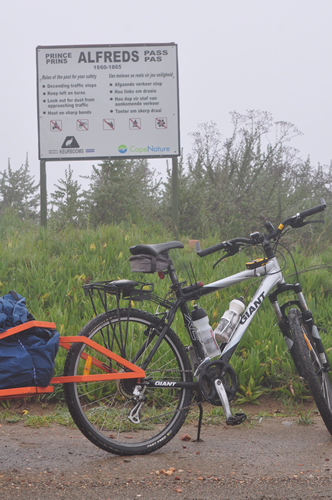 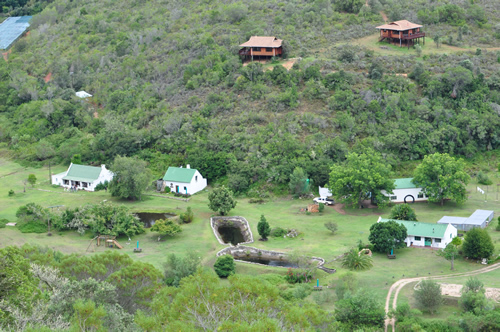 Over the course of my two days at the lodge I would dart out whenever possible to survey, but realising that I would have to continue, I eventually had to brave the muddy road to continue on my way. I had an appointment with the Bike Shop in Plettenberg bay to get to by the Saturday. Steep muddy roads meant I arrived only just at closing time, so it looked like I would have to wait until Monday for the free service on offer. Just as I was about to slog back up the hill, a car pulled up in front of me and out jumped a rather excited man. He mentioned his son had just finished a similar ride and that if I was not in the mood for the hill (I wasn’t) and if I needed a place to stay (I did) then I was welcome to make the most of a spare room at his. So this random act of kindness meant I had sanctuary for two nights with John and Pippa, who also showed me some of the hidden Fynbos treasures of the area. 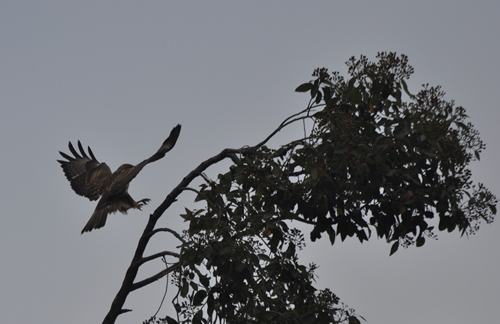 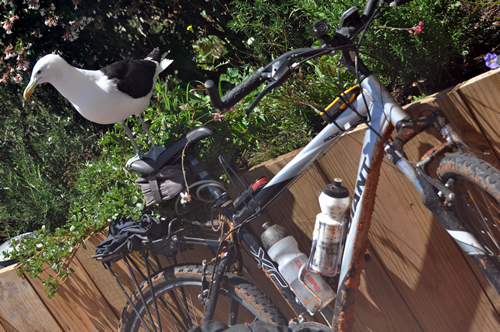 On the Sunday I decided to survey the Robbeberg peninsula just to make sure no one was missing any Rockjumpers. I was rewarded with great views of seals, dolphins; Black Oystercatchers and Bank Cormorants silhouetted against breaking waves; but no Rockjumpers. After my bike service on the Monday morning, courtesy of Leon Evans and The Bike Shop, it was time to explore a section of the old Tsitsikamma 4x4 trail near the Crags. This had been part of my original planned route, but sections have been washed away during the floods of recent times. 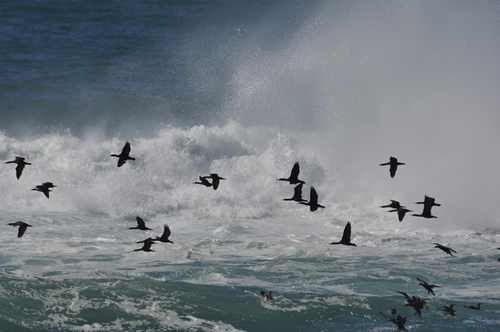 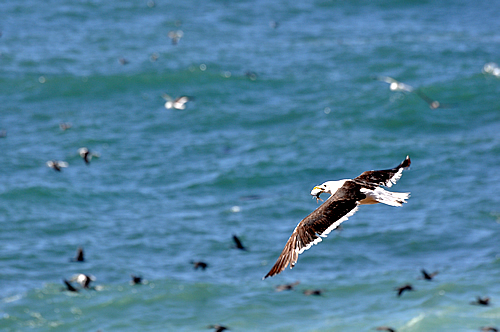 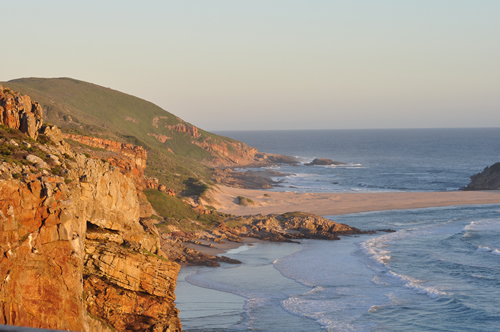 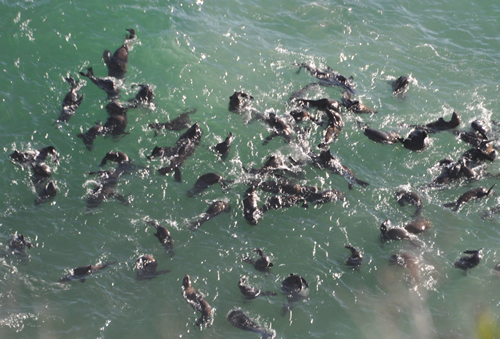 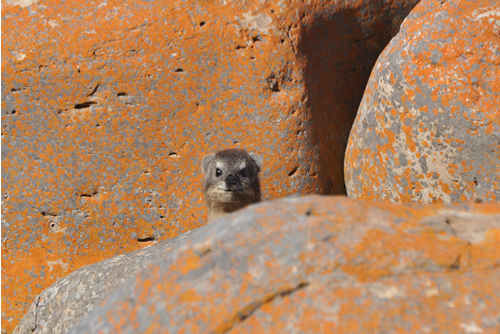 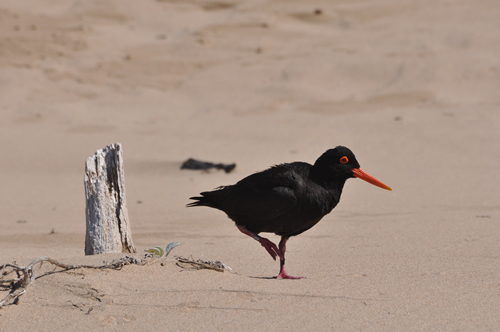 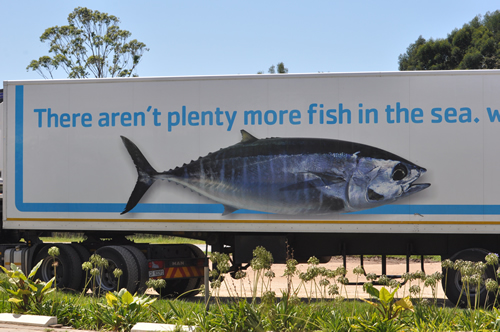 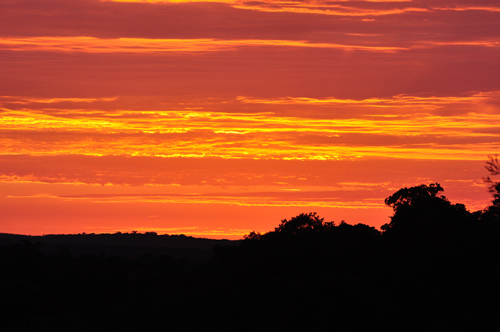 I ditched my kit at a backpackers at the Crags, and proceeded to push my bike through plantations that line the lower slopes of the southern Tsitsikamma mountains, eventually emerging in lush and beautiful Fynbos where Cape Sugarbirds and Orange-breasted Sunbirds jossled for positions on long Protea compacta stems. Tuesday would be a landmark day – after surveying the Fynbos on the ridge towards Nature’s Valley, clocking up 20km along the way, I then sailed along the N2 towards Kareedouw, clocking up over 100 kilometers for the day, my biggest one day cycle so far. I rewarded myself with a stay at a bed-and-breakfast – for Wednesday would see the start of 5 days of camping I as I set off into the Baviaans Wilderness. 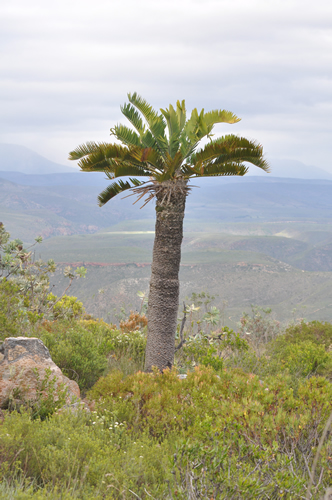 The 50km from Kareedouw to the Baviaans Lodge was mostly a hike, and more tiring than the slog from Plett, as the road wound up and down across hills, valleys, and the Kouga River. Unlike Prince Alfred’s Pass, the route was refreshingly free of alien invasive trees such as Black Wattle and Pine. The views are spectacular – this is the start of the Rust en Vrede 4x4 trail into the Baviaanskloof. The loose gravel made cycling up the steeper hills impossible as the back wheel would just spin out, and extra attention was required on the downhills. Despite that, my first spill occurred as I was heading down a dried muddy section of road.
I arrived at Baviaans Lodge only a little bloodied and bruised. The Baviaans lodge has a lovely campsite among Acacia karoo along a little stream. I was greeted by Rob le Roux, owner, and Koekoe, hostess. Rob does exciting hikes and canoe trips down the Kouga river to keep him busy, and enjoys living in one of the world’s most remote and peaceful regions. Luckily for me the weather behaved, to within reason, and I able to spend 2 solid days trying to spot Cape Grassbirds and Grey-backed Cisticola’s hiding among the Ericas and Aspalathus. Eventually, sadly, it came time to leave. I knew I had a hard day ahead of me, having surveyed a section of it. Baviaans lodge is only 250m above sea level – and I would have to climb to over 1000m, a task that took me 2 hours to complete 7 kilometers as I pushed and pushed and pushed some more. I may have been quicker hiking!
Wildebeest and wild horses greeted me at the top, although it would be cows that would be my eventual camping partners next to a mountain dam in the middle of nowhere. To balance the ridge route that the trail follows – with views that stretch from Kougakop to the west to the Cockscomb in the east – I surveyed some valley sections on foot, picking up my first Southern Tchagra and Ground Woodpeckers of the survey. Then last Sunday it was time to head down into the Baviaanskloof, a ride that although less than 20km proved to have the heaviest toll on bike and equipment as I bounced my way down the rocky road, resulting in 2 irrepairable ‘snake-bites’ (impact punctures) on my poor overladen rear tyre. I hobbled into Rust-en-Vrede with the bike on its last legs.
The final section of this stage of the survey had to be completed with the assistance of a vehicle – as due to Buffalo and Rhino cycling alone in the Baviaanskloof Nature Reserve is not permitted. On Monday, the first day I did not conduct a survey in the last 2 weeks, I was picked up by Anja and Elena and we headed to Bergplaas, the mountain hut in the Baviaans mountains. It was occupied by Mountain Zebra researchers – and I encountered several of these special zebra during the survey. 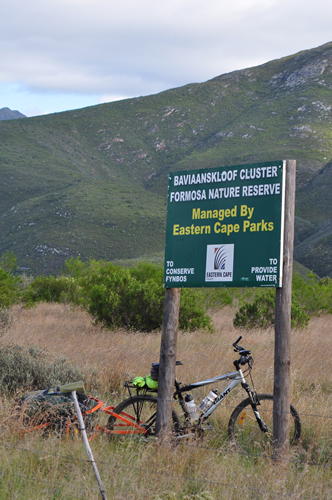 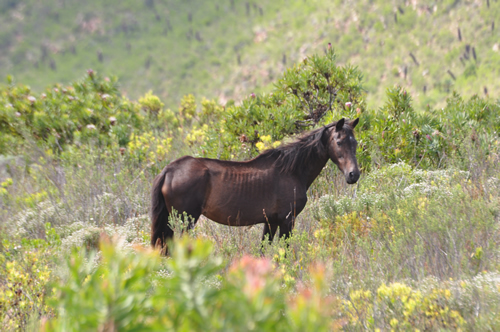 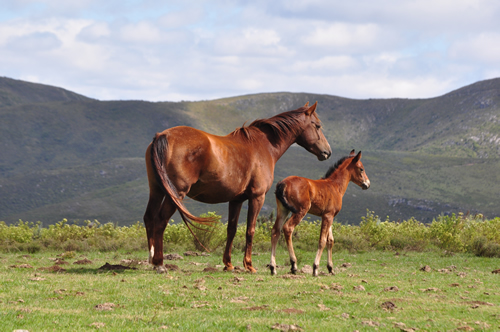 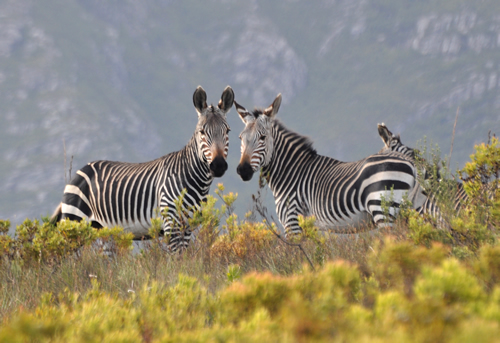 Yesterday it was back to Blue Hill for some rest, restocking, dealing with emails and generally catching up with the world. Its been a taste of things to come – but from now on its a journey into lands mostly unexplored and unknown to myself. The voyage of discovery will continue tomorrow as bike, binoculars and trailer head to the Kammanassie Mountains.