Karoo National Park was the last stop in our 3 SANParks holiday (see previous postings on Camdeboo and Mountain Zebra), all of which lie within a 3 hour drive of each other, and no more than 5 hours from Blue Hill. Karoo National Park is the largest of these three, at 90 000 hectares. And my preconceptions that it was the largest protected area of flat, featureless Great Karoo were very wrong. Karoo National Park lies just north of the N1 and the town of Beaufort West (population 40 000) and boasts the geologically diverse and visually captivating Nuweveldberge, the edge of the escarpment and the old African land surface. Volcanic basalts and dolerites overlay millions of years of history in the mudstones laid down when the area was part of an inland swamp or lake system of the prehistoric Gondwana continent – dating back over 300 million years. The park really invokes a sense of history, from the fossil trail with mammal-like therapsids, to dinosaurs, to stone-age man artefacts dating back nearly 2 million years, to more recent colonial history.

And nothing seems more prehistoric than the rhino with its sabre-like horns. Rumours of Black Rhino activity had reached us via the campsite grapevine, and we decided to try our luck on the Potlekkertjie Loop in the afternoon. This route winds through flat and dusty plains until reaching the Sandrivier, which cuts back into the Nuweveld mountains. Here Acacia thicket makes up the most of the riverine vegetation, and it is this ‘sweet thorn’ that is the main food of the Black Rhino, which is able to eat it thorns and all.

The rhino were not hard to spot, with the male and female munching from a bush only 50 meters from the road. We were ecstatic! As the female moved off in search of a private snack, the male lifted his head to the skies, scenting the sweet smell of rhino musk. We didn’t keep our eyes on him for too long as the trajectory of the female was taking her straight towards us. Anja was getting very anxious, as tales of the aggressive nature of this animal are legendary. More game rangers have had to climb trees to escape pursuing rhino than for any other member of the big five.  I was sure that their attention was on each other, but started the car and reversed into an escape position just in case someone needed to vent a bit of sexual frustration on us innocent by-standers.

The male rhino had used the female’s distraction to his advantage and had manoeuvred into a strategic position behind her. Extending his giant penis (his rear horn was longer than his front horn) he was just about to mount her when she wheeled around faster than a pirouetting ballerina and chased him off with a booming clash of horns. Clearly she was not an exhibitionist and was not prepared to do the deed with anyone watching. While he begged and pleaded for a good few minutes more (even getting down on his knees!), she was not going to change her mind. After all, she knew privacy would be forthcoming as the camp gate closed at 7pm and that we would soon have to be on our way.


Just past 6pm, the rhinos now in shadow, it was time to head the 25km back to camp. A Black-backed Jackal with a cataract over one eye distracted us for a bit, especially since he seemed to be chewing on an Aardvark’s arm. With the countdown clock ticking, we then had to speed past jousting Gemsbok, surprised Kudu, stately Eland, Klipspringer (finally!), a nursery herd of Haartebeest and Baboons to get to the camp gate on time. And just when we thought it was all over, just 25m from our tent in the road in front of us, bang on 7pm, was a female Caracal. I couldn’t have been more surprised, and despite the poor light managed to pull off the following sequence of photos of this most persecuted of Africa’s cats, before she disappeared into the bushes.

This is all a very brief summary of some of the highlights of our 3 nights in Karoo National Park. It would be a long post to list them all, but safe to say we will be back – we still need to see those Karoo Lions after all! 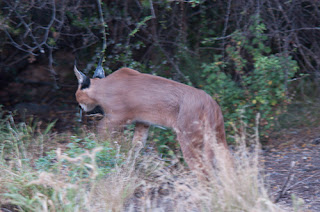 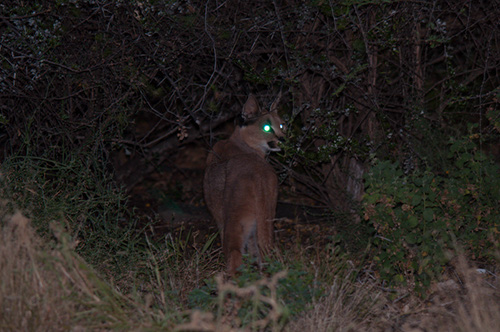