It was my first ringing session for the month with new volunteer Gerardo Ceron (from Argentina). Not only did we catch a nice batch of Cape Siskin, but the real highlight was a totally unexpected surprise in the form of this beautiful male African Firefinch (also known as the Blue-billed Firefinch). 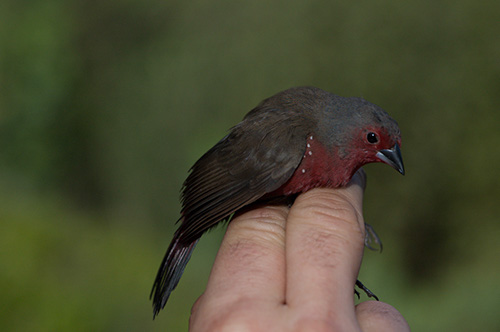 This species is relatively common in the eastern parts of southern Africa, and has been reported sporadically from slightly further west, around George. However, the first Southern African Bird Atlas Project wrote off sightings from this part of the world as confusion resulting from the Red-billed Firefinch. But these species are quite easily distinguished in the field... courtesy of the very obvious difference in bill color in the males.

It is interesting to note on the atlas maps from SABAP2 the species occurs very infrequently along the southern African escarpment – the Nuweveldberge, e.g. from Graaf Reinett to Beaufot West. I think the clue is the in use of habitat – for instance, it is conspecific with Jameson's Firefinch further north, but occupies a different habitat – montane thicket and grasslands. I think this explains the species presence on Blue Hill Nature Reserve – with the veld now 1 year old, there is a lot of grass, especially in the mountain valleys.

Either way, we are gracious to this individual for its visit, especially to the nets (as it may well have been overlooked otherwise).


The African Firefinch is the exclusive host of the Black Widowfinch (Dusky Indigobird), so we are hoping for one these to rock up next!