Rock Art in the Kammanassie 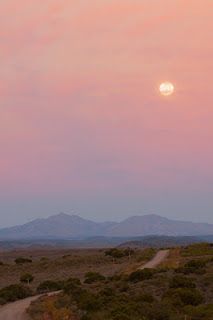 The Kammanassie holds many secrets. One of these must be some of the best rock art shelters I have ever had the privilege of seeing. While the Cederberg is often touted as having the highest density of rock art in South Africa, if not the world, this may well only be due to the exploration of that very accessible area, only a few hours from Cape Town. A same line of thought using bird atlas data would show highest species richness around Johannesburg, Cape Town and other urban centres in the country – because of the effort concentrated around these points, not necessarily due to real species richness.
Further afield, things are poorly documented, and in the eastern sections of the Klein Karoo where the ancient African landsurface overlays the ancient rocks of an old Gondwanaland sea, caves are common, and nearly all these caves have some form of paintings in them. Renee Rust in her book “Water, Stone & Legend – Rock Art of the Klein Karoo” has gone some way to documenting some of these sites together with her interpretation of the images that can be commonly found.
On a field trip last week to explore options for excursions for the forthcoming Geoheritage Conference (www.geoheritage.co.za), we explored what must be one of the best rock art sites in the country – Leeublad. This is a cave on private property, and landowner permission is needed for access. Our guide was Dick Carr of Rolbaken guest house, who hosted Renee on her field trips. To get there, a 4x4 and an hour walk over steep terrain are involved, and it’s worth it.
The panel of paintings is over 12 meters long, with paintings upon paintings. Paintings from the area which have been dated range from between 200 – 2000 years. Many of the images are subject to interpretation, and for some images 12 modern people could offer 12 different answers, but the truth is we will never really know the significance and meaning for the original artists of the delicate and colourful images that adorn these walls. The following is a small selection of what can be seen here. 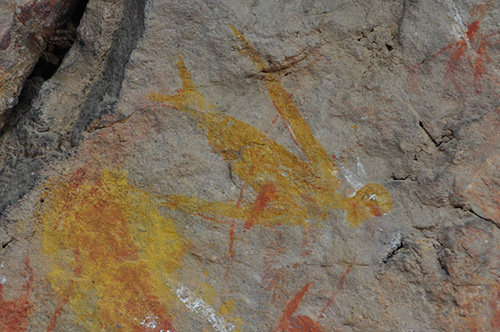 Renee believes that much was painted during trances, when people would reach out to their ancestors in the spirit world through the rock face. Some ‘half’ images may be images where the other half is actually inside the rock for instance. Many images are of human/animal figures – anthropomorphs. The most famous of these locally are the ‘mermaids’ of Eseljacht, another famous site not far from Leeublad. They are more likely to be images of people transforming into swallows, or vice versa.