Since we have been living at Blue Hill, perhaps on alternate years Jackal Buzzards have nested in cliffs not far from us. Jackal Buzzard is one of the world's most strikingly beautiful buzzards, and a South African near endemic, where it is relatively common.

I was interested to see what prey items were being delivered to the chicks ever since one of the farmers in our community mentioned that Jackal Buzzard were killing their pigeons. Camera traps are allowing us insights into the most intimate of nature's secrets; and are frequently used by a range of researchers to document life histories at raptor nests: Black Sparrowhawk and Crowned Eagle recently the focus of two PhD students in South Africa.

I installed a Bushnell motion sensor camera on the nest at 10:30am on 14 October. There were two small fluffy white chicks, which I did not photograph as I wanted to minimise disturbance and leave the area as quickly as possible. I'd later regret this: an insight into the chicks health at this stage would have been useful for unraveling the mystery of what happened over the course of the next few days. Already at this early age it was clear that one was not going to make it, with one chick twice the size of the other. Cain and Abel-ism is a common, somewhat disturbing, aspect of the reproductive cycle of many raptors: the first born chick kills or out-compete younger siblings.

Within minutes of my departure the female had returned to the nest. 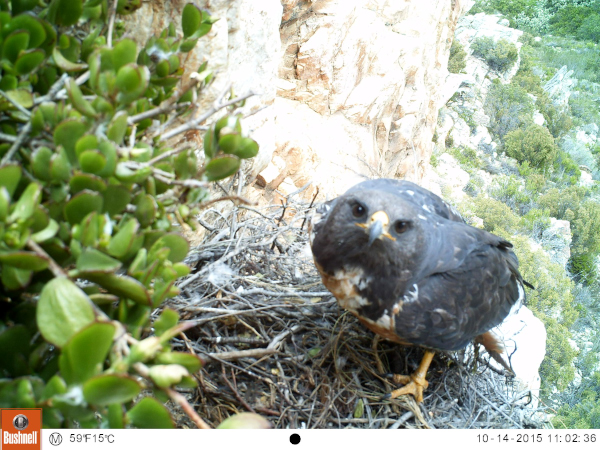 Over the course of the next few days several interesting prey items are observed including one small bird (possibly a chick), a large bird (possibly Red-winged Starling), several agamas and a sungazer lizard, two snakes, a small mammal and a Sengi. 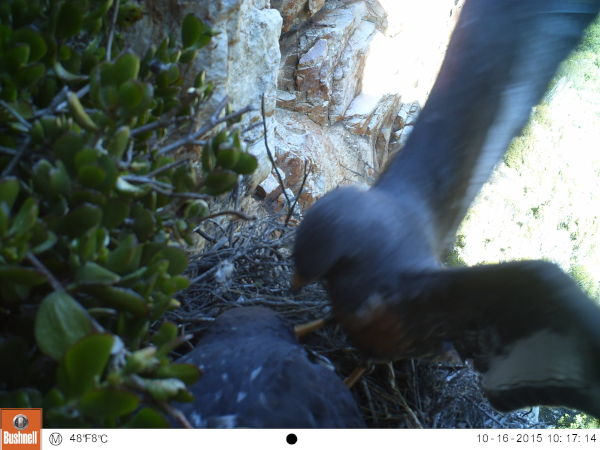 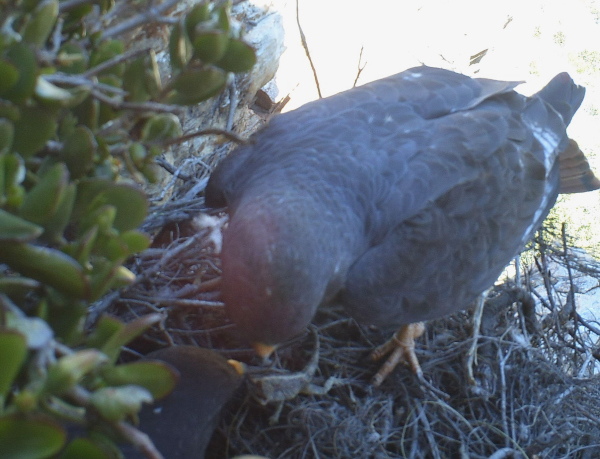 The weather was extremely variable over the week of action captured, from below 5 C to over 35. Panting and wing-drooping, behaviour associated with heat-stress, are observed from temperatures starting in the mid- twenties. The brooding female has to endure hours of hot afternoon sun. 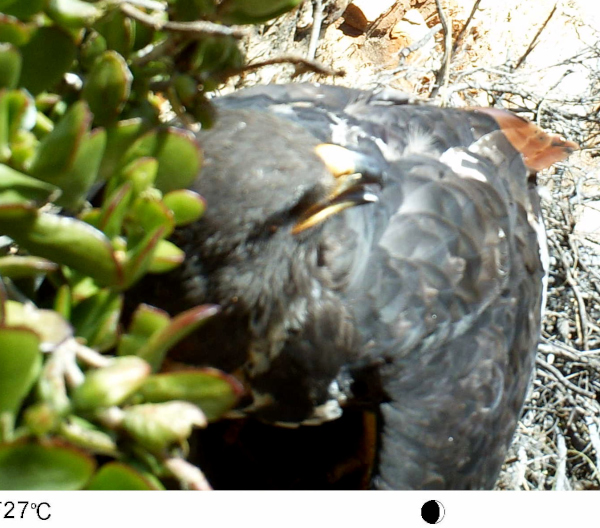 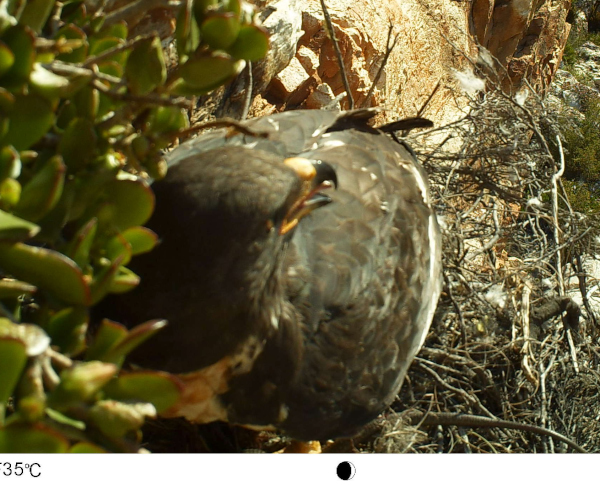 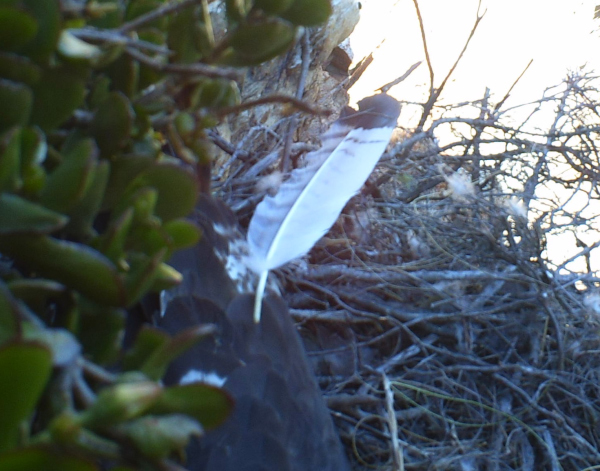 There are very few photos of the chicks due to the angle of the camera.

On the second day the smaller chick is still alive, but the photo below looks like the mother disposing of the youngest chick (subsequent photos in the following seconds after this one show the adult flying away). 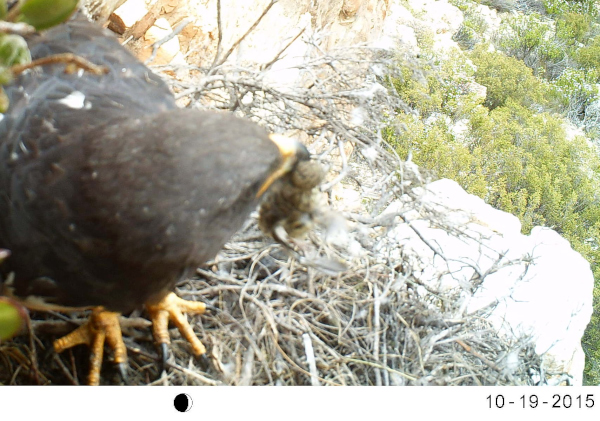 But all is not well. This photo reveals damage to the head of the remaining chick. 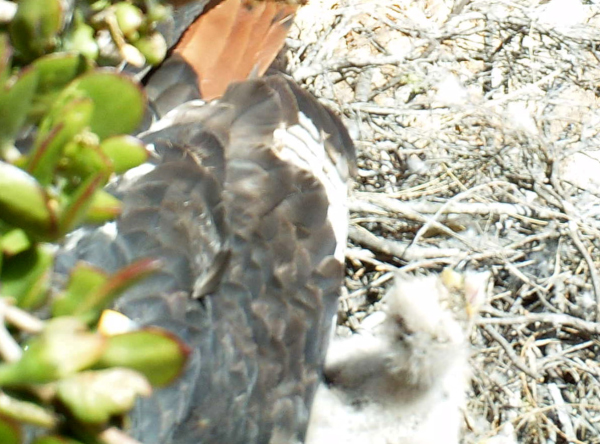 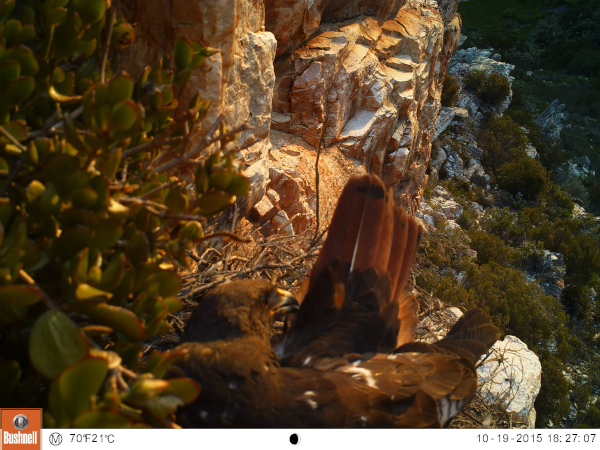 This is the last photo of the chick, which looks to be carried by an adult. 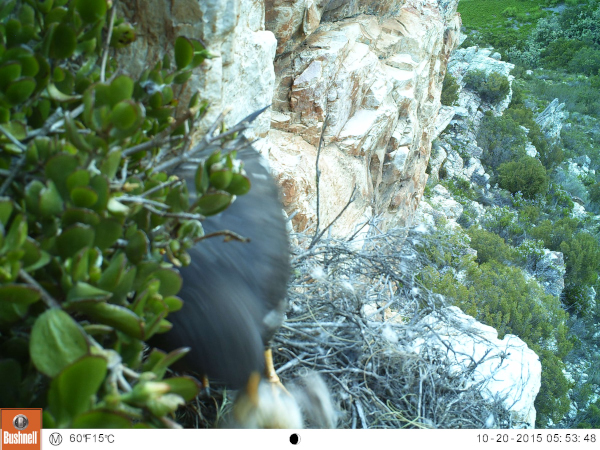 After this photo adult Jackal Buzzard visits are rare: in one an adult is carrying a stick – nesting material – but whether it is rebuilding or recycling is not clear.

Other species are quick to usurp what is left of the abandoned nest.