The break of dawn was heralded by squabbling familiar chats. We had slept well under winter down duvets at the Rock Cottage of Meijer's Rust, just to the west of Meiringspoort. All the same, day three of the most recent cold front soon had us dressed in jackets and beanies. I was vaguely surprised that we were ready to go by 7am: an early night brings its own rewards.

Our target for the day was the peak of Bloupunt, marked as 2066m asl on the map of the Klein Karoo by Peter Slingsby. Anja and I had failed to make the summit two years earlier:
http://bluehillescape.blogspot.co.za/2015/12/bloupunt-attempt.html

It is an impressive peak, most beautiful when approaching Meiringspoort from the Klaarstroom side in the early morning.

And the start of this attempt was also looking very touch-and-go. Anja was just getting over a bout of nasty flu and had been off the tread-mill for 2 weeks. I’d been doing way too much laptop time, despite the occasional jaunt into the mountains or early morning job. But more to the point: a strong north-easterly was blowing mist over the mountains, and the peak remained concealed.

However, a few factors were in our favour: a massive veld-fire in December 2016 meant the fynbos was thin on the ground. Also, we had a plan of attack based on our previous attempt. And this time the Jimney was working, so we were able to drive about 2km from the Rock Cottage towards the campsite. However, the last section is all washed out due to the floods that closed Meiringspoort a year ago, so we couldn’t get all the way. Never-the-less, we were cautiously optimistic with our first steps northwards.

We chose a line of approach that would keep us on the south-west facing slope out of the blast of the mornings wind. Still, there was little need to rush, as the low lying cloud seemed none-to-keen to dissipate. As such we dawdled our way up at a comfortable pace, stopping frequently to admire honeybush, Tritoniopsis and a few other smatterings of late summer flowers. And record Rockjumpers and siskins. We made Bloupunt Junior at about 10:30, and decided for an early brunch in the shelter of some rocks to see if the cold winds would blow out. And our patience was rewarded: the mist blasting over the north-east face abated, and a line towards the summit could be seen.

Our traverse across the ridge to the peak was made more interesting when our line of approach topped out over a 10m cliff. Faced with up or down, we chose up, skirting the wet rocks nervously towards the summit, not sure if we’d have a way around. Luckily, we managed a route across eventually, close to the north-east face. Then the way to the top was more or less straight-forward: a watsonia covered slope of 40-50 degrees, with creek bubbling away under the rocks in the nearby valley.

And we smiled more broadly than the gods that had cleared the weather from our path on reaching the first summit at 2066m at 1pm, with clear views over Karoo, Little Karoo and west and east along the magnificent Swartberg range. The true summit, a small walk away stands about 30m higher. And there we stood, against the odds, with cold but splendid weather and a feeling of great satisfaction!
The descent was fairly straightforward: the Bloupunt spur comes down close to the old Meijers Rust campsite. It just felt a very, very long way before we got to the Jimney, sitting at 900m, at just after 5pm. Those fitter and younger should have no problem with this hike. 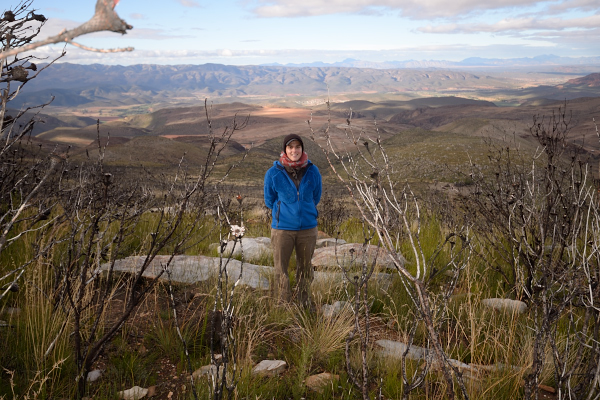 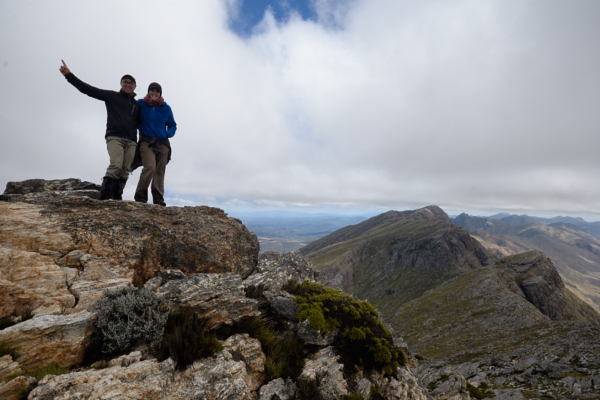