An atlas hack up Peak Formosa

Smoke and ash billowed from the mountain top, while earthquakes shook the small town below it. Rivers of lava started to flow down the erupting volcano, but that wasn’t enough to stop Pierce Brosnan driving through them to rescue the family of the town’s mayor. As you see – our ascent of Peak Formosa had started off on a slightly strange note, as Anja was unable to sleep and we had decided to abandon attempts to sleep further at 4:30, turning on the television for some entertainment, to find Dante’s Peak fittingly relegated to the early hours of the morning.

Our preparations for the hike up Tsitsikamma’s highest peak had actually started several weeks earlier at least. The peak was targeted some time back for our annual ‘birthday’ ascent after conquering Bloupunt last year. As access to Peak Formosa is over private land, and we’d struggled to get hold of the owner (Marius Strijdom) or a response from a guesthouse we’d identified nearby, we’d driven out to the agri-industrial town of Louterwater to track the people down face to face. We felt this was a good move, as there is a veritable labyrinth of farm roads through apple orchards below the peak: it could be super easy to get lost, even with Google Maps. We also managed to track down a receptionist of the Louterwater Landgoed guest cottages to confirm a booking.

Our mission to find Marius Strijdom was less successful: instead we crossed paths with his son and heir-apparent, Darius. His demeanor was not of the friendly type, and he requested a R100 per person ‘gate opening’ fee, so if you can get hold of Marius, so much the better: the ‘free’ access to the peak looks set to change.

While our ascent attempt was originally scheduled for 10th March, yr.no had been warning us about poor weather conditions all the previous week, so we delayed till the following weekend. You don’t want to be tackling a new difficult mountain ascent and dealing with weather at the same time. So, we did a warm up hike up the familiar Bloukop on the 10th instead.

As it was, the day of the ascent was perfect weather: cool temperatures to start, only a mild breeze, and mostly clear skies. We got to the massive dam, home to just a few Egyptian Geese and nervous Reed Cormorant, that marks the start of the trail at around 7:15, with sun just touching the high peaks. While white marks on burnt trees indicate the trail, this was so overgrown we decided to keep to the edge of the dam and rejoin the trail where we had learnt it crossed a stream feeding the dam. That was a bit of effort to find, and the trail at that stage is still massively overgrown with tall fynbos, which the Cape Sugarbirds think is fantastic. With the early morning dew, we were soon so wet we may as well have set off in the rain. On the plus side, at least there is a trail: there hasn’t been one on the last 2 summits we’ve done.

Once over the second stream, the ascent begins. The lower slopes are sickeningly covered in Hakea and Pine. My dad had gifted me a hand-saw for my birthday, inspired by Donovan Kotze’s talk on the sport of alien hacking given at the Gouritz Cluster Biosphere Reserve. This proved a useful way of pacing myself with Anja: moving ahead and sawing down a sapling while waiting for Anja to catch up. I hope that other hikers will similarly do their duty to preserving the beauty of this fynbos by similarly tacking some of the invasive vegetation along the trail: neighbouring slopes have been completely converted to pine forests. That is a bad thing, because as we all know, grizzly bears live in pine forests: so, save yourselves and cut down a pine today!

Just after the pine trees thin out one hits the eastern ridge. From here, while the trail is steep, but the going is easier as the vegetation lower with the soundtrack provided by tireless Victorin’s Warblers. There are lots of excuses to stop to soak in the views, scan for birds, and admire the Erica’s and other fynbos. It took us 3 hours of admiring the views, hacking pines, recording birds to make it to the ‘Knife Edge’. The slopes at this section are really steep, but it would be better described as a ‘Saw Edge’ since the ridgeline is up, down and around rocks and boulders. Faced with ‘The Gulley’ on the other side, this was all too much for Anja’s vertigo: time to get out her book and wait for me to hit the summit. The Gulley is certainly a technical scramble, but after that its relatively straightforward to the summit, which I reached about an hour after the Knife Edge.

The logbook at the top was entertaining reading. Probably the most memorable quote was ‘Please cut the grass’ from some visitors from Germany. The cross on the top is also home to a Bible, but its in Afrikaans just in case you were wondering if you should leave yours behind. While I scouted around for rumoured Cape Rockjumpers for a while, I had no luck.

The descent was fairly straight-forward, with the exception of the growing heat. While we’d taken 2 litres of liquid each up, we were parched by the time we got to the stream at the base of the peak. Still, the excited White-necked Ravens that had been circling would have to look for dinner elsewhere that day. The swim in the dam to end it all was magnificent.

Certainly, this hike requires a good degree of freedom, and shouldn’t be tackled by anyone, and its hard to recommend from a birding point of view: 7 hours producing just 25 species. But the views are magnificent, and there is plenty of sport to be had if you’re into alien vegetation hacking.

We used this blog as part of preparation, which has a gps track file: https://muisvoel.com/2017/01/formosa-peak/ 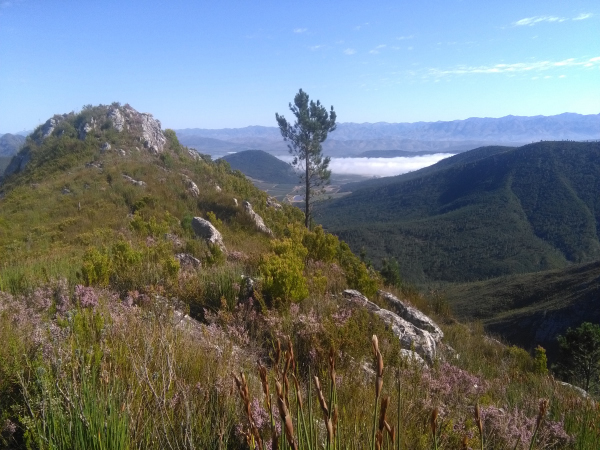 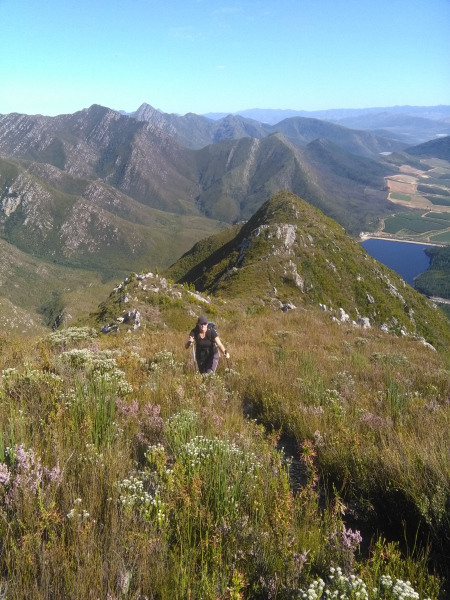 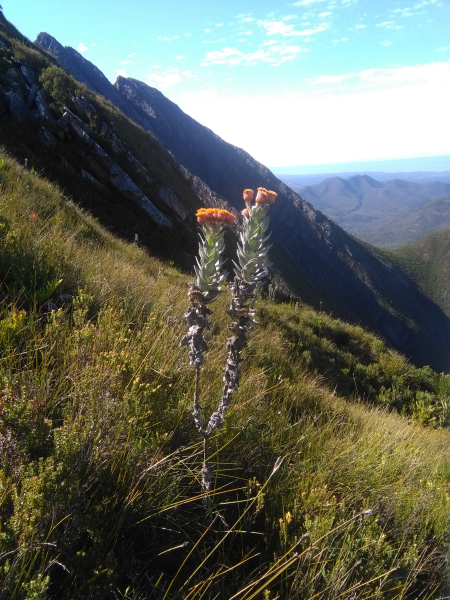 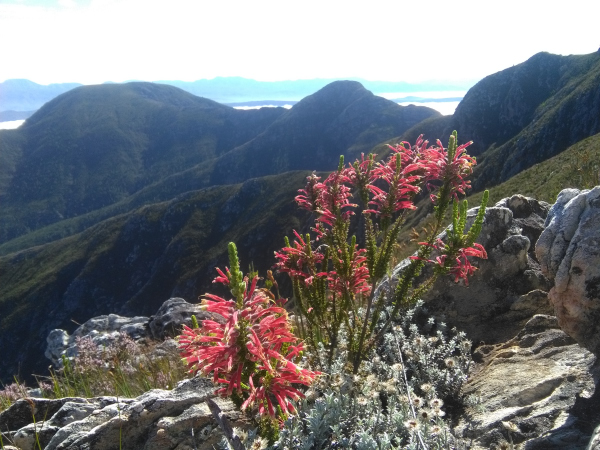 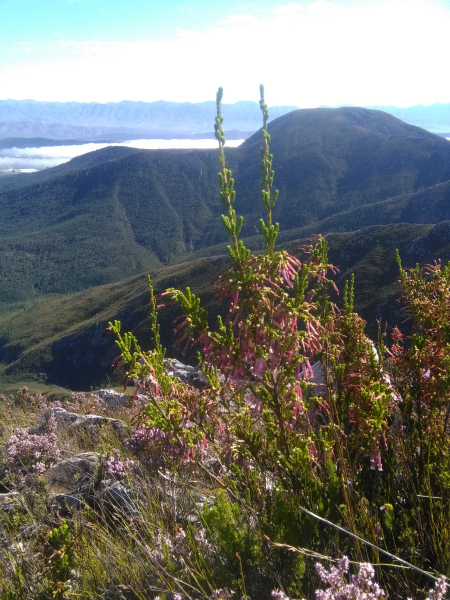