It was an honour to have an article published in the latest African BirdLife magazine commenting on the crazy influx of Orange-breased Sunbirds to Blue Hill over December. However, the article did not publish several charts, which I think paint a good picture of what happened, plus the consequences of a fire event on these birds. I still don't know why most birds were juveniles for instance.

This is the text: 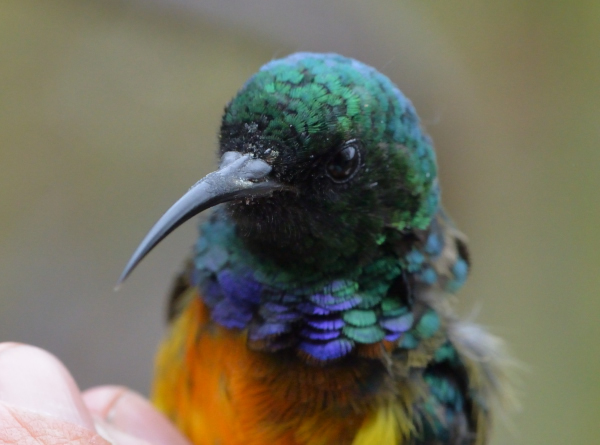 The fires in the Outeniqua Mountains around George (Western Cape province, South Africa) that raged from the end of October to beginning of November 2018 were the largest in the region in recorded history, burning a region of some 80 000 hectares, leaving 8 people dead and many people homeless. These fires follow close on the devastating Knysna fires of 2017. Fighting fires in these remote mountain areas is dangerous: one helicopter pilot died during the most recent incident, and fires are generally only engaged with they threaten people or property. For weeks we were on fire alert, fire fighting equipment at the ready, as we woke to smoke-filled valleys from the fires from the adjacent mountain range.

Still, the vegetation of these mountains, Fynbos, is fire adapted, with many species requiring a fire event as part of their life history strategies, either to clear away dominant vegetation in the case of rapidly resprouting geophytes and grasses, or to release seed stocks stored on the plant over years, as in the case of most protea species. Similarly, bird communities change in response to fire history, with terrestrial foraging insectivores and granivores dominating recently burned veld, whereas nectarivores dominate older vegetation. So, while fire might be great news if you’re a Cape Rockjumper or Long-billed Pipit, it’s bad news if you are an Orange-breasted Sunbird or Cape Sugarbird. These nectarivores require flowering Erica and Protea species for most of their energy requirements, and these plants normally only start to flower a few years after a fire event. What happens then, to these birds after a fire?

I have been ringing on Blue Hill Nature Reserve, Western Cape, about 2 hours drive from George, since 2011. Back then, there had not been a fire on most of the property for some 15 to 25 years: tall proteas crackling with Cape Sugarbirds dominated the landscape. But at the beginning of 2012 a massive fire swept across most of the property. Predictably, the sugarbirds and sunbirds disappeared, but had they died or departed? I would retrap only two birds that had moved to an adjacent unburnt valley, so what had become of the rest? I could only speculate.

However, just after the Outeniqua fires I was bird ringing again near a pond where I was expecting to mostly catch granivorous species like Cape Siskin and Cape Canary that come to drink. Instead, my nets were literally sagging with Orange-breasted Sunbirds. Closer inspection would reveal that the majority of these were also young birds: only a few months old and displaying residual gape, or with some youngsters with an orange feather or 2 giving away that they were aspiring to be beautiful males. The sheer quantity was overwhelming: on 14 November 2018, in 3 hours I caught 47 Orange-breasted Sunbirds from a total of 67 birds using a single 12-meter-long net. The huge number of birds could not have originated on the reserve, they must have come in from the burnt areas to the south. Certainly, for a bird traditionally associated with Erica species, there were none to be had at this ringing location: they may instead have been settling for muddy water and blue Psoralea flowers (members of the Fabaceae).

On average, these birds were also the lightest compared to the previous 3 years, indicating some birds may have been starving. One was soon recovered dead, and by the end of December, capture rates had declined dramatically – the birds likely dispersing further or dying. Certainly, there were no refugee camps for these youngsters. Overall though, a cruel reminder of the impacts of increasing fire events in the fynbos and the consequences for its wildlife. 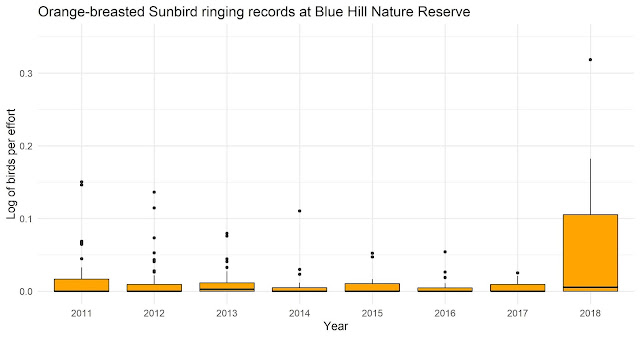 By comparison Cape Weaver capture rates are 'the same' 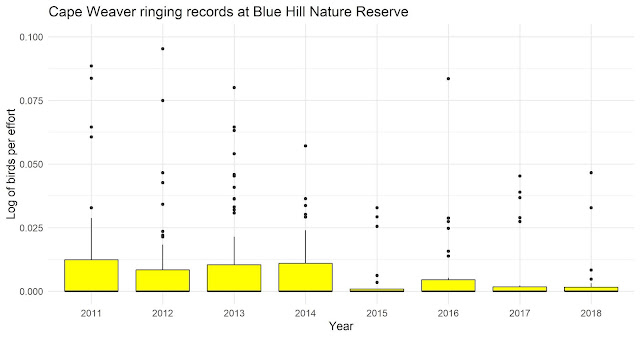 The proportion of 'juveniles' is alarmingly high 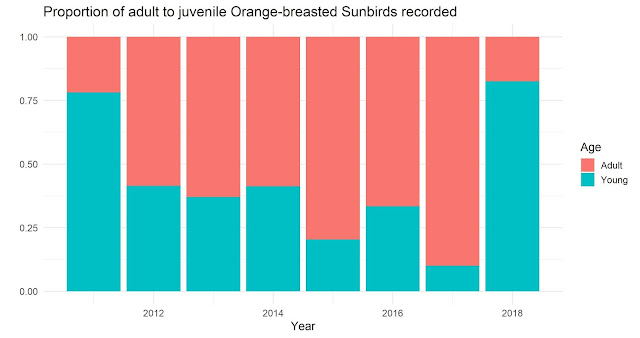 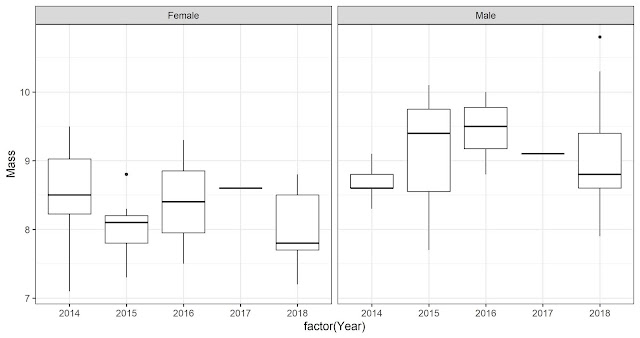