Altha Liebenberg, Les Underhill and Salome Willemse put together a BioBash at Boegoeberg Dam Holiday Resort on the banks of the Orange River near Groblershoop. This was one of the best sponsored but most poorly attended bashes I have been to: remoteness and unfortunate incidents taking their toll on several initial interested parties. The Resort sponsored the safari tents (2 people sharing), including a kitchen tent. Altha Liebenberg secured sponsorship for dinners, snacks and goody bags. All we had to bring was a sleeping bag, binoculars, and BirdLasser. Apart from the organisers, other participants were friends of Altha’s: Hardy and Joey; a student of Les’: Karis, myself and Stefan. On the upside, it meant we could eat left-over Kalahari steaks for breakfast.

Altha is a prolific contributor to the ADU’s Virtual Museums, while Karis is doing a thesis on modelling approaches using sparse data sets, using the BirdPix database, so her contributions would be focused on that. Les is also now more focused on Odonata (Dragonfly) mapping. This meant that there would be only 3 bird atlassers: Salome, Stefan and myself. So perhaps this wasn’t so much to be an atlassing bash as an atlassing tap or knock.

I departed Blue Hill Escape on the Monday to join Stefan in Beaufort West, for an early morning departure the following day to tackle some virgin pentads north-west of Britstown. Stefan had arranged landowner access, and had specifically targeted these pentads to test his predictive model for finding Sclater’s Lark, trained on frequent encounters on the Aberdeen plain in the vicinity of Beaufort West.

Our early start was negated by the theft of Stefan’s wife’s boxes of school books and purse, which we learnt about as we were passing through Victoria West. Turned out I was the perpetrator of the crime, having accidentally packed in the boxes along with our camping kit. Luckily, although the Northern Cape is a big province, you don’t have to work hard to find someone who knows someone who can lend a hand, and we were able to hand off the stolen items to extended family connections in Victoria West who would arrange that it be returned to Beaufort West the same day within a matter of hours.

After the minor setback (minor for us, major for Stefan’s wife), we obtained the key from the farmer for our desired pentad, passed through several locked gates, and then pretty much drove straight up to a watering trough which within minutes delivered visiting parties of Sclater’s Lark. It is always incredible to experience this species; and to realise that we might have a real key to determining range and habitat use of this mysterious bird. Sclater’s Lark has a very large range, stretching into Namibia, but is very sparsely encountered within that range. None-the-less, it can be very frequent at certain livestock drinking points: but also not all of these, and what determined their preferences had certainly not been cracked by me after 2 years traversing the Karoo. Stefan had cracked the code basically in his spare time, and the record that morning likely represents an eastwards range extension for the species in the Northern Cape. We’re hoping Robin Colyn will formerly introduce the predictive model as part of his PhD on rare and enigmatic lark species.

We got to the second pentad only just before midday: never ideal for spotting birds in the Karoo, especially when a brisk, cold wind is blowing. Despite some time at an ideal water-spot, Sclater’s remained hidden here (but in this case the lack of a sighting certainly not representing an indication of certain absence). Birds in this pentad certainly indicated that we were on our way to the Kalahari though: with plenty of Stark’s Lark, and both Karoo and Kalahari Scrub Robins. A scarcity of Lark-like Bunting was commented on.

That was a super first day, and we reached Boegoeberg Dam just in time for the evening meal, with >700km under the Isuzu's fanbelt. Boegoeberg Dam is a big fishing destination, but being out of holiday season our little party had the newly renovated campsite all to ourselves. The new manager, Magda, is certainly working very hard to turn around the reputation of this beautiful site, a once neglected municipal campground. The sound track of the campsite would be African Fish Eagle by day and Pearl-spotted Owlets by night.

Salome had come up the day before, and had already made serious progress in improving coverage. In terms of efficiency, its hard to beat this lady. Large coverage maps had been printed out (thanks Tino), and we were all issued a version which included roads: great for planning. The challenge for our small party of 3 atlassers was how to maximise coverage with only 2 vehicles, and with access to the east confounded by the Orange River, effectively restricting our access to the western banks. Luckily, Salome is fine with driving big distances, and I had my bicycle, so an action plan soon unfolded. The ghost town of Putsonderwater beckoned to Salome, while it made more sense for the bicycle to cover ground closer to the base.

Stefan dropped me off 2 pentads to the south, and my day proceeded smoothly. I dropped into the only farmstead in the area, and got permission to scale the electric fence towards my targeted virgin pentad from the owner. I had a cracking day, with 40+ species counts on my 3 pentads, with highlights including nesting Verreaux’s Eagle, Kori Bustard, Double-banded Sandgrouse and Great Sparrow (BirdLasser Golden Point). Stefan’s day was more challenging, with roadside birding his first pentad hard work without access to water in a landscape dominated by dry Driedoring, and many locked gates confounding access to his delegated virgin pentad. He managed to eventually find a phone number on a farm sign, and got access permission from an absentee landowner based in Upington who simply flies into his game farm. Turns out the pentad Stefan got access to was also the one I was doing, so this ended up being well covered from west and east. We ended our day atlassing the base pentad by canoe on the Boegoeberg Dam, which was an awesome and productive experience.

Salome’s highlight of the day was the ghost town of Putsonderwater, plus a family of Spotted Eagle Owl, and a remote pentad with little access but that luckily had a dam in the corner that allowed access and produced a decent species list. An abandoned farm in one pentad painted a picture of the hard conditions driving people off the land, certainly reflecting sentiments by other landowners we spoke to in the area. Certainly Uniondale, seems to have lots of competition in terms of ghosts in these parts. Many other pentads would keep their birds a secret behind locked gates and electric fences.

A strong north-westerly wind the following day would lay waste to ambitious plans for great coverage and further photo records. The hot wind turned the sky brown with Kalahari dust, which settled in our eyes, ears, and even left a fine layer of dust on all possessions within the closed tents. That evening I asked Karis what their sighting of the day was: a Plain-backed Pipit. You know its been a tough day when bird of the day is a pipit. Stefan and I certainly could not produce a bird of the day, but considered ourselves lucky: the farmer that had given us permission to access a virgin pentad along the Orange River gave us shelter and food in exchange for company.

Refreshed from our enforced day of rest, and with the last full field day ahead of us, it was time to catch up with work. My target pentad for the day was an inaccessible pentad, so Stefan dropped me and the bicycle off on the side of the road to head off to his pentad with a dam that would produce the record species total list of the expedition: 86 species in 4 hours. In the meantime, I was pushing my bike through Driedoring bossies, to then scale an electric fence, to access the virgin pentad. Given that this would likely be the only time anyone will ever do this pentad, I was obliged to cover all habitats, which involved climbing a mountain (the reward for which was merely a Grey-backed Cisticola), and pushing the bicycle through several kilometres of red dune lands. Unbelievable, as I scaled the last gate to get to the N10, within minutes Stefan was at hand to pick me up.

We then spent the rest of the afternoon turning Stefan’s ad-hoc card started 2 days previously into a full protocol card. While this is usually hard work for the midday-afternoon period, by the late afternoon when we found a well-maintained farmhouse, we were suddenly on 48 species. Stefan has a joke that he won’t submit an atlas card if it has fewer than 50 species, which meant that we then had to spend another hour looking for the last 2 missing species. Since Salome was on the verge of sending out a search party a few nights previously when we wondered off try to beat her pentad species list for the base pentad, we eventually on 49 species decided that perhaps 50 would escape us this time.

So, our bird of the day was definitely a Helmeted Guineafowl. Literally as we heard the BirdLasser beep to indicate we’d crossed the pentad boundary, a flock of these beautiful birds crossed the road in front of us. A quick reverse and sure enough some flew into the pentad so we could justifiably bring up the 50 score for the day, to the sound of celebratory High-5s.

Salome had spent her birthday doing 4 pentads on the northern side of the river, again accompanied by Karis, snapping away for the BirdPix project. Salome was ensuring her base camp species list lead, which stood at 78 species at the end, would be the winning total. This time their bird of the day was a Pied Wagtail. That night over a celebratory bottle of bubbly (for the birthday, not the wagtail) we would learn that if these two were to be reborn as birds, they’d both want to be Wandering Albatross. I’ve resigned myself to the fate that if reincarnation is a thing that I shall be an Ostrich, given my current role in life (Editor of Ostrich: Journal of African Ornithology). Stefan wasn’t to be dragged into this nonsense of course.

In terms of serious work done Salome had the best coverage, with 14 pentads in the pentads associated with Boegoeberg Dam: close to 4 pentads a day. Stefan also clocked up 14, but including pentads in the region of Britstown, with me as co-contributor to several of these. I contributed only 4 unique lists, but these included two difficult virgin pentads. Everyone clocked up more than 100 species for their trip lists, so despite the drought conditions, the interface of Karoo and Kalahari together with frequent access to dams and the Orange River means this is a bird species rich area, and will certainly be on my radar for future trips to the Kalahari. Of course the work in the field was the fun part, a test pentad listed submitted to SABAP2 produced 6 out-of-range forms from a card of 50 species: so justifying our sightings will be the work of the coming weeks.

Again, thanks to all team members: Les Underhill for encouragement and chasing off monkeys (a loud ‘KaWamba’ is the secret), Hardy and Joey for camp maintenance and cooking, Salome for excellent coordination, and Altha for the inspiration and securement of sponsorship. 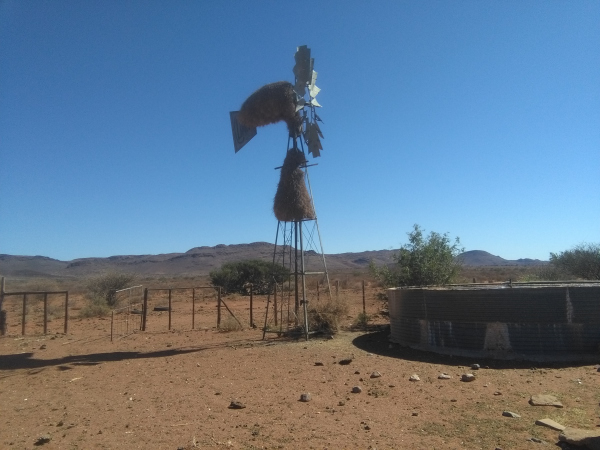 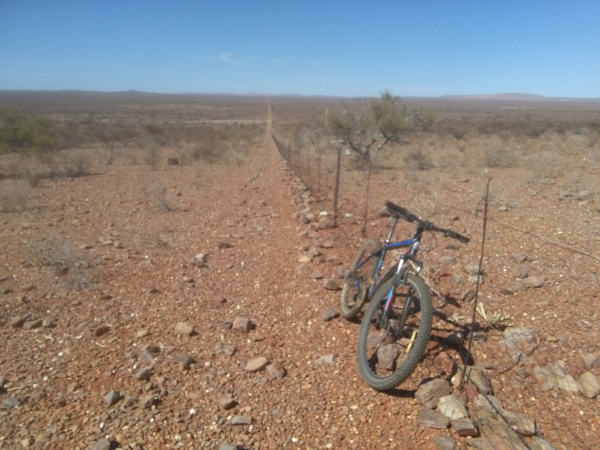