After a late arrival in Nairobi, safely delivered by Kenya Airways, it was an early start with Malika Fettak (Biosphere Expeditions’ expedition leader) to pick up two 4x4 vehicles. This being Kenya, we checked the 2.4 liter Hilux very carefully but, it would transpire, not carefully enough. Our first challenge was to get to the Enonkishu conservancy on the edge of Mara, an estimated 6 hour drive. To do this one has to descend the escarpment into the rift valley: which must be one of the most dangerous roads in Africa. Impatient trucks overtake on blind bends in the badly pot-holed road, or even on the unpaved verge. Olive baboons snack on discarded corn cobs. As a driver one can only snatch glimpses of the tremendous views over the rift valley.

It was in this convoy of vehicles, that the battery light in my vehicle first lit up on the dashboard. Concerned, I turned off the headlights, unplugged the cell phone charger and turned off the radio. The battery light went off, but by the time I’d descended the escarpment it was on again, and not much further the ABS brake warning light was on too. The car was clearly struggling. In the next major town, Narok, I headed straight for a garage that looked like they did batteries. As expected, the car was dead. Being a hire car, getting permission to change the batteries was a saga, but permission was given to change one of the 2 batteries.

Ages later, back on the road, the rain set in. Tropical rain. But within 10 minutes of lights and busy windscreen wipers, the check battery warning light was back on. It was clear the vehicle was not going to make it to the conservancy. We were still on the ‘good’ tar road. The next town seemed very far away, knowing you are driving on road with crazy people but hardly able to see out the window. The car died as we were trying to find a safe place to leave it in the next village. I climbed in with Malika, we arranged for the car to be collected by the hire agency, and we continued.

The road to the conservancy would be the next adventure: mud puddles in a track mostly washed away from the rain. At a small stream crossing a Toyota passenger transporter was stuck. Lots of people all around. We wondered how to pass. A tractor arrived and pulled it out. I got through without a problem. But the rain continued, and it was dark. We discovered the car lights had no ‘high’ beam, so the road was illuminated maybe 20m in front of us. The final stretch to the conservancy the road was literally a river, it felt like a boat would be more suitable for this section of the road. Luckily we encountered no elephant or other wildlife in the road. Almost there, with the camp but meters away, I finally got stuck in a what looked to be puddle but was a deep hole. A fortuitously passing local ranger managed to free us.

The next day in the camp was all about setting up, organizing equipment. We didn’t want to go out. Rebekah, the conservancy manager, told of a male lion that had breached one of their cattle bomas the previous evening. I got to grips with the local birds. The broken car was delivered in the evening.
Day 2, it was decided I needed to learn some of the routes in the conservancy. Neither of the vehicles would start! But Jimmy, the magical handyman, sorted out the poor connections to the battery. There was water everywhere. Roads were more an idea than a reality. We navigated chasms, dongas, mud, cross country. Mud flew from spinning wheels. But we saw Cheetah, and much wildlife: it was all concentrated on the highlands to escape the flooded grasslands.

Day starts to the sound of hippo in the Mara River. We drink coffee while bushbabies scream in the riverine vegetation. We must leave early to get to Nairobi to do shopping and pick up another vehicle. We leave camp at 7am. We assist one passenger car stuck in a puddle. The next crossing a truck and a tractor are stuck. Eventually another tractor arrives and pulls out the stuck tractor. We get through again. Then we hit a traffic jam of Maasai on motorbikes on their way to market with chickens or other produce . What is normally a small stream is in flood. Fast flowing water extends for 200m across the road. I do some birding with a crowd of local interested children. They learn the word ‘binoculars’. Malika is stressed: how do we get to Nairobi? After an hour we learn there is another, longer, route to the north of the conservancy. We navigate our way out the queue.

The tricky crossing with the stuck truck. Malika is driving. Entering the stream we slip off the track, deep into the river. Water is coming through the door. I climb out the window to strip to start pushing out. Up to my groin in water, there is a crowd of people to help; we rock and push the car out. 2nd attempt, Malika makes it. By 1:30 pm we are back at the camp we’d left earlier that morning.
We head north, the road is deceptively good. We learn we are on the wrong road, and are pointed up a muddy path in the direction of the village we need to get to. We are told the road is bad. It is terrible: vehicles do not use this, and we slip-slide our way north, there are many ‘nearly’ incidents. Camel Trophy would think twice about this route. An eternity of mud later we get to the tar road. It is 4pm and we still have 6 hours to Nairobi… up that dangerous road, in the dark.

That was the first of many off-road adventures. 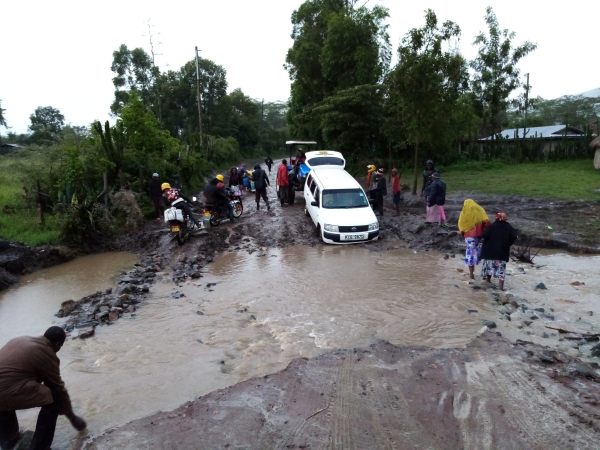 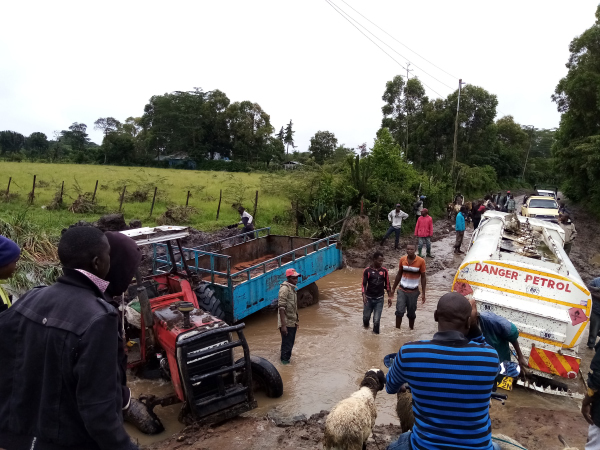 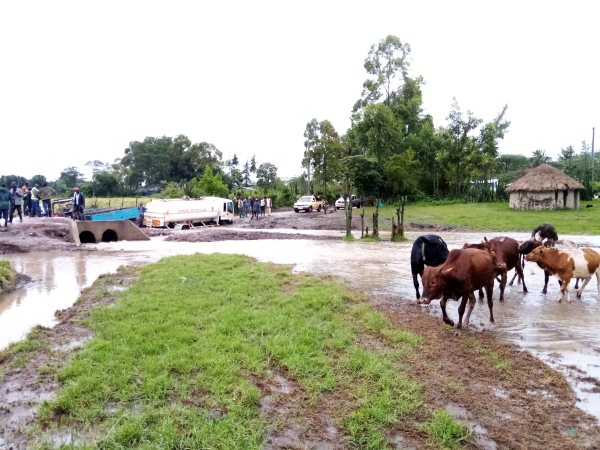 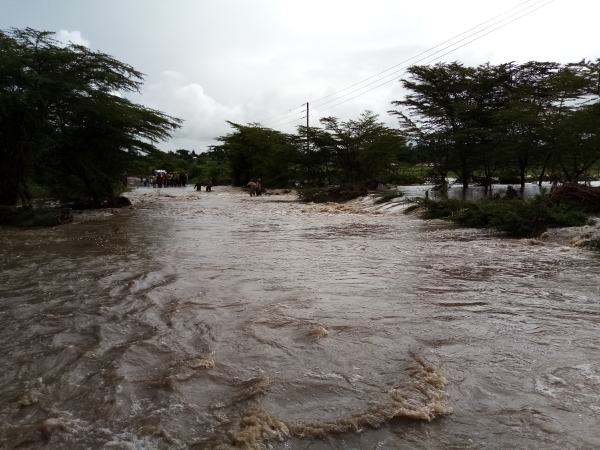 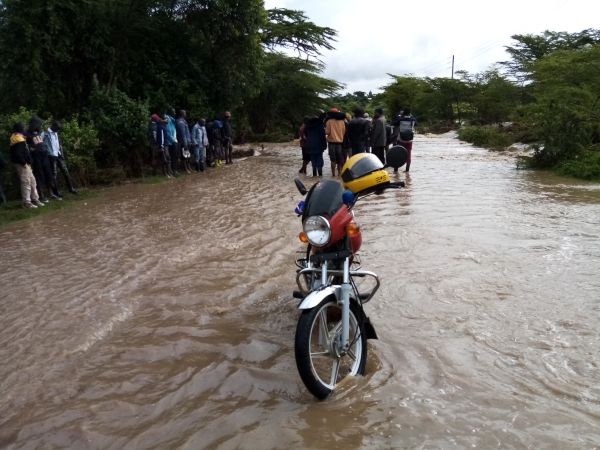 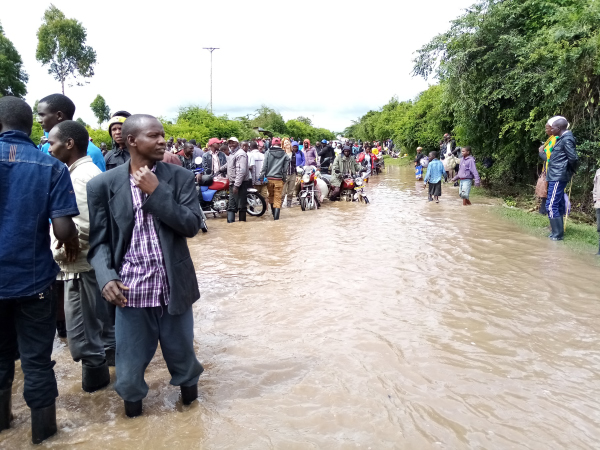 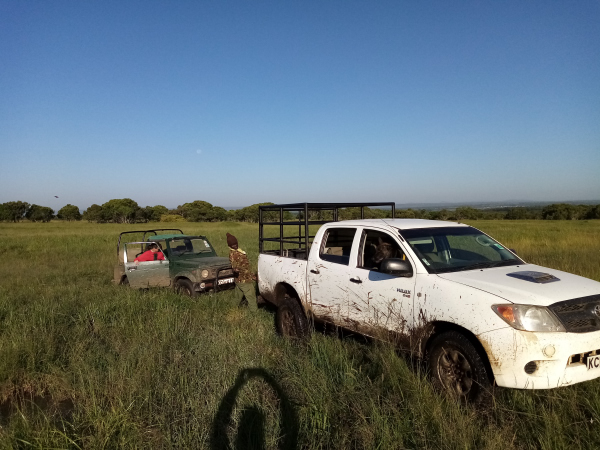 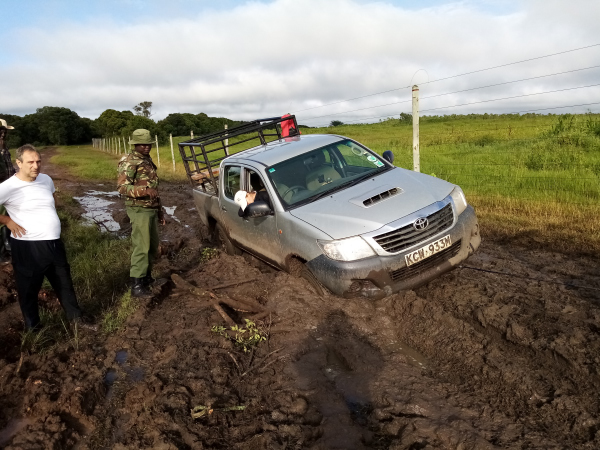