Jaguar Journey: battle of the titans

At the end of May I headed into the rainforests of Peru with Biosphere Expeditions, an agency that facilitates layman participation in research projects such as the Icons of the Peruvian Amazon. My role was lead scientist, having worked in Peru since 2002, and at the study site on the Las Piedras River since 2005.
The last expedition had taken place in November 2009. Marcelo Mazzolli, director of Proyecto Puma, and a leading cat scientist from the Atlantic Rainforests of Brazil and I had explored a methodology for monitoring cats by placing remote cameras along forest trails, and preparing areas of soil (we call track traps) in order to quickly and easily distinguish the large cats of the area. We obtained three photos of jaguars, enough to let us know the area was being used by at least two male jaguars – as can be told by their unique coat patterns.
This time our first cameras installed resulted in jaguar photos. Most exciting was that it was clear that one of the male jaguars that had been present in 2009 was still present in 2011. With his gorgeous domino patterned coat, he was named Matthias, after Biosphere Expeditions director Matthias Hammer. In addition to the presence of the male jaguar, it was also clear that a lot of other jaguar around. At one site over 23 tracks of a jaguar were counted in a single 1x1meter track trap. Due to the concentration of jaguar sign in this area, we wondered about the possible presence of a cub in the area. A few days later we found on the main ‘jaguar highway’ foot-prints of a female with what appeared to be a medium sized cub. What became of these two we will never know – the camera’s only picked up a female once, and not in the company of a cub.
Despite extensive sign of jaguars in the first two weeks formal survey covering over 100km and easily another 100km of informal survey, no jaguar were physically encountered. It was if we were stalking ghosts in the night.
Things changed in the third week. On her first introduction night-walk trainee guide Ines Perdomo caught the glimpse of the back end of a jaguar moving rapidly away from her. Unfortunately none of the other five people who were with her say anything. Then, a few days later novice expedition leader Jiri Haureljuk was waiting for peccary to visit a claylick (natural saltlick) when he heard a grunting noise he presumed to be the jungle ‘pigs’ he was waiting for. He was startled to see the patterned coats of not one, but two, jaguar approaching. They jumped onto a fallen tree, allowing Jiri to snap some awesome photographs of a female jaguar (presumed to be in heat) and a very, very large male. It was he who was making the grunting noises. The male did not match patterns from previous photos obtained of the cats in the area. Jiri decided to name the male jaguar Jerry. 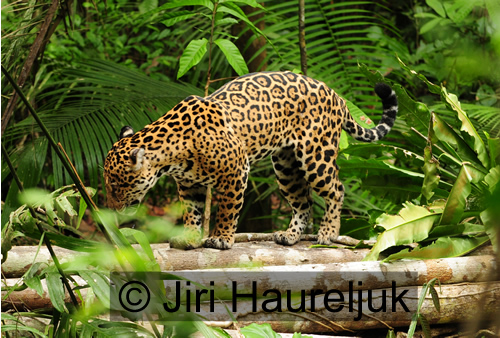 Suddenly Jerry was appearing regularly on the camera traps. He was obviously the new boy in town – and a rough one at that. A close up shows scarring on his neck and ticks on his coat. 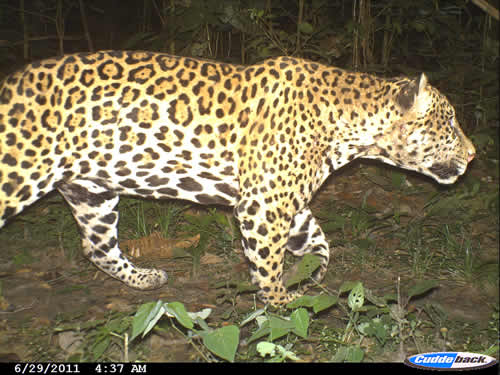 On Monday the 27th July, I set out from the base camp at 4am in the morning in order to reach a distant survey position. Accompanying me were Connie and Thomas, from Hamburg, Germany. These friends had previously had big cat experience with leopards in Namibia. We were walking along, as quietly as the drying leaves of the Peruvian Amazon ‘summer’ would allow. On a night walk I carry a large Maglite, which I was scanning the trees and both sides of the forest on either side of the trail. Half an hour into the walk my beam swept across the path to illuminate the brilliant white, green eye-shine of a jaguar on the path. As I stopped and swung the beam back onto the path, the jaguar turned and slipped away into the darkness. Neither of my companions had seen it.
But not more than two minutes later, on a long, narrow stretch of trail my beam picked up jaguar eye-shine swinging from side to side as the mottled shape of a giant cat came pacing rapidly down the trail towards us. I moved to the side of the trail, reminded of past stories of how Louise Emmons (a Smithsonian fellow and author of the field guide to Neotropical mammals) had encountered a jaguar walking down the trail and simply stepped off the trail to let the creature pass. However, by the time the jaguar was six meters from us I was not sure he was aware of our presence, so I stamped my foot. 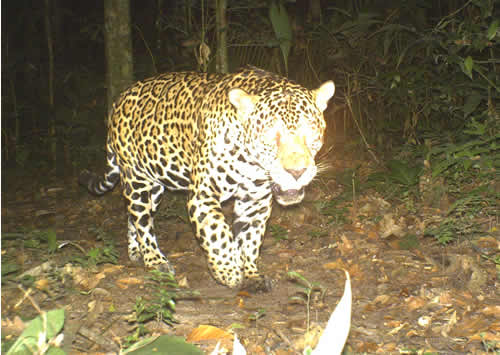 The jaguar stopped, mouth open, head up, trying to make out the source of the unusual noise beyond the bright lights. We stared at each other for a while, the jaguar moving his head from side to side or up and down; us frozen. His large head would easily have reached over my belt and I would not have been surprised if he weighed over 100kg. I realised my camera was back at the base – I had forgotten to take it out of a dry box used to protect electronic equipment from the persistent humidity of the rainforest.
‘Take a photo!’ I whispered back to Connie and Thomas.
A scurry of unzipping and rustling of packs ensued. The jaguar, having given us a fair chance, turned around to head back up the forest trail. As he did so I saw the characteristic donut behind his shoulder and triangle on his flank – we had been face to face with Jerry. By the time cameras were out and people had figured out how to work them, the jaguar was gone. But in the distance we could hear a plaintive, catlike ‘reow’. It was clear the female in heat was in the vicinity. 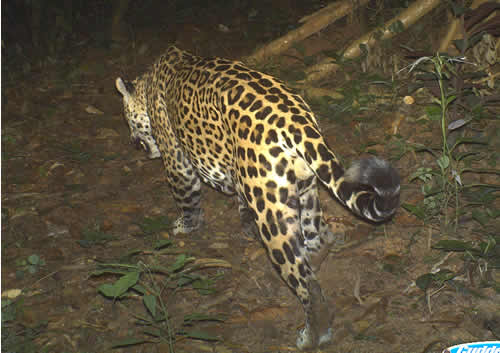 We crept along the trail for another two minutes, listening to the female calling and the occasionally deep, huffing of Jerry. Then we encountered eyes on the trail again, beneath a fallen tree. This time it was clear from the smaller size, crouched and nervous disposition that we had come across the female. Unfortunately Thomas’ video camera could not capture the growling form in the low light, coupled with a healthy dose of shaking hands and beating heart. We could hear the male approaching from beyond and the female; caught between us and her suitor, she fled.
By now it seemed to me I could hear jaguars in every direction. But still we pressed on. We had science to do, dammit! Couldn’t let these mating jaguars get in the way! And eventually we heard incautious movements through the dry vegetation away from the trail. I presumed we had seen the last of them, and we continued on our way quickly and less cautiously in order to make up last time. Then the beam of my light illuminated a vine snake coiled up like a bracelet on some low branches. At last Connie would be able to use her camera. But as the flash illuminated the jungle like distant lightning, my attention was distracted. I could head the jaguars again. Leaving Connie and Thomas behind to watch the snake I moved slowly forward. Not only could I hear the plaintive ‘reor’ of the female, but I could now also hear a distant, throaty, territorial ‘HU HU HUUUU’. It may be from this call that the local name for jaguar is derived – ‘O TO RON GO’. I glimpsed a jaguar trotting across the path and towards the distant growls. 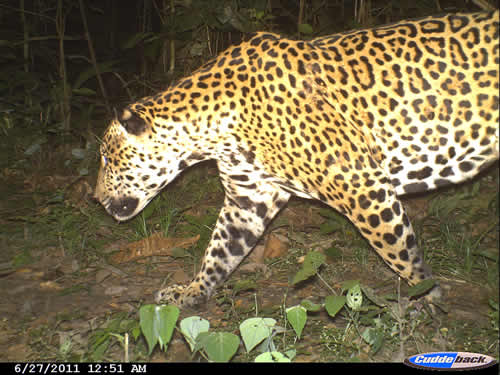 By now we could Connie and Thomas had rejoined me. It was clear something was up. We stood in the darkness listening to the occasional ‘reow’ past the tinkling of frogs and ‘porotowango’ of distant wood-quails. After several minutes the growling began to escalate. Beyond the beam of our flash lights it was clear a titanic battle had broken out – I can only imagine between the resident males Matthias and Jerry. The primordial, lion-like roars were unlike anything I had heard before. Not having my camera, I had resorted to the only way of documenting this event I had – a Dictaphone. All I can say is this recording does no justice to the reverberating battle that took place at 5am that morning: click here to listen to a 4minute mp3 file of the jaguar battle.
‘You realise we are safe – the jaguars are only interested in each other?’ I said to Connie and Thomas. In hindsight – I don’t know if I believed that or if I just needed to reassure myself. After the battle, when we had reached our survey point with the breaking dawn Connie would say that she had not felt afraid, even when faced with Jerry just 5 meters from us, until the point of the battle. Only then did it become clear to her of the power these animals had, a premonition of the damage they could cause should we have disobeyed any of the fundamental laws when faced with such predators – the most important of which is ‘DON’T RUN’. 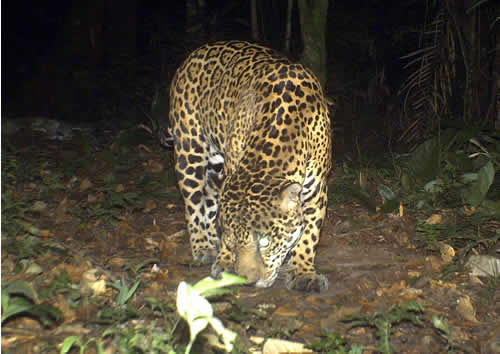 We may have witnessed a turning point in the hierarchy of power that night. All subsequent photos from ‘jaguar alley’ were of Jerry. What became of Matthias we can only speculate.