A nice time in Anysberg

Actually, a lovely time in Anysberg.

Anysberg Nature Reserve is a vast showcase of the best of what the Cape Floral Kingdom has to offer; with the variety of habitats from dry, hot, succulent Karoo to moist, cool Fynbos. Anysberg is named after the Anysberg mountains which lie at the heart of the reserve, reaching to around 1700m at their highest, and in some ways these can be considered the last of the Swartberg mountain range. It is however cut off from the Klein Swartberg mountains by a couple of deep poorts and valleys, and so the fynbos of the Anysberg represents one of the several habitat islands of the Klein Karoo.

I had been invited to Anysberg by the manager Marius Brand to search for Hottentot Buttonquails, as Anysberg hosts a variety of restio dominated habitat types, which the bird is meant to prefer. There is also an extreme range of veld ages, ranging from six to over 50 years since the last fire.

A journey into the Anysberg fynbos is a 4x4 expedition. A track extends almost the length of the mountain range, an incredible journey with ample rewards in terms of rolling views and the little gems that are the delightful fynbos flowers, including several rare and endemic species.

I arrived just before lunch time on the Monday morning after a quick resupply stop in Laingsberg on my way out from the Seweweekspoort. I was greeted by Marius's friendly wife Adri, who works at the office, as Marius was off on a rescue mission: a duiker had somehow got its head stuck between the bars of one of the gates. It was not long before Marius and the field rangers returned triumphantly from their rescue; and they were all ready to go. So after a brief introduction to the Hottentot Buttonquail and the survey protocol, we were off.

We were quickly onto the lower slopes of the mountain in restio dominated veld, having past the temptations of gemsbok, kudu, ostrich and a young Crowned Eagle along the way. After a quick lunch the surveys started up the mountain. We quickly had Long-billed Pipit and Grey-winged Francolin on our target species list, while the ever present Cape Buntings cheered us along, and flocks of Lark-like Buntings constantly had us on high alert as they flitted along in front of us. After an eventful 4 kilometers we called it a day to head higher into the mountains to set up camp.

Marius proved to be an expert camp cook, preparing the braai meat supplied by Birdlife South Africa to perfection. With bellies full and with cold mist starting to blow between the gargoyle like rock formations of the Table Mountain sandstone, we were soon all tucked up in our sleeping bags listening to the wind play with the loose flaps of our tents.

Energy and anticipation, together with the early turn in, meant the camp was stirring naturally at the crack of dawn at 5am. We'd driven through some promising restio dominated habitats the day before and hopes were high. Marius drove a support vehicle as he needed to depart to return to administrative duties, and the rangers now spread out in a well organised line despite tricky terrain. Red-tailed Rock-rabbits and Cape Rockjumpers kept us busy and entertained, but after 7 kilometers on the north west facing slopes it was time to turn around and try the south-west facing slopes. More Red-tailed Rock-rabbits, ever beautiful Black Eagles and Klipspringer kept us entertained. We ticked off another tough uphill 3.5km before lunch and then headed back to camp for some rest.

While we rested, Johan Vaughan, the longest serving field ranger with just shy of 30 years experience at Anysberg, entertained us with stories of his experiences under previous managers including Rob Erasmus and Alan Martin, all keen birders who had qualified Johan as a ringer. Johan told us how he had hiked up the mountain to a Bosbou hut on the other side of the mountain together with Oom Willie (second longest serving and oldest of the ranger with us at 49 years). Marius (Johan's son and also a field ranger) had never been to the hut, so we decided to do an afternoon survey on the southern slopes of the mountain in that direction as Oom Willie and Johan reckoned it was only 1 or 2 kilometers away from our camp.

We should have know that we should be circumspect about the estimated distance to the huts as earlier Oom Willie had been in charge of the range finder to measure distances to target species. He had spotted some Klipspringers on some rocks I estimated to be 200m away. His first estimation using the rangefinder was 41 meters. Then 45. This had the other rangers chuckling and Nkosinathi Moyo who was next to him asked him to measure the distance between them: 116 meters!

Meanwhile, in good faith we set off down the mountain in search of the mythical hut, surveying as we went. After 2 kilometers, questions were being asked, as the hut was nowhere in sight. After 3 kilometers we decided to stop the survey simply to reach the hut, which was constantly being described as being “just over this ridge..”. Eventually, 4 kilometers later and down the hill we came across the old hut. The roof was long gone and no-one had used it in years, Oom Willie reckoning his last visit was 15 years previously. They had used the hut to tackle alien vegetation on the slopes, and the pristine fynbos we'd passed through was testament to his hard labours of long ago. Of course we still had to get back up the mountain to the hut, and we were very grateful to see that Johan already had the evenings fire going since we'd clocked up 22km of cross country mountain hiking for the day.

The field rangers were in their tents already just after 7pm, with the exception of Nkosinathi Moyo, who kindly agreed to keep me company despite the chill, damp breeze. Nkosinathi shared that he was was of mixed Zulu-Xhosa descent, but had grown up in Paarl and so was fluent in Afrikaans, being the natural language of banter among the rangers. He already has six years of service at Anysberg and still travels back to Paarl each weekend to visit his mother, wife and one-year old boy. Due to the distance and cost, this means he has to hitch-hike the N1 from Touwsriver to Paarl every week. As the eldest son of the family, his sense of duty and responsibility are clearly evident, and I was impressed during our excursions that he still collected specimens of plants he did not yet know, and with his initiative around the camp. For his sake and that of the other field rangers I hope that the recent acquisition of the enormous property adjacent to Anysberg that has increased the size of the reserve to around 80 thousand hectares will mean opportunities for career advancement. Freezing positions and asking the existing overstretched staff to include the extra 20 thousand hectares in their day to day duties seems very unfair.

Wednesday morning dawned very damp from the mountain mist that had blown through the night. The ever efficient rangers had the camp packed up quickly into the back of the Toyota Landcruiser. The crazy 4x4 track that zig-zagged up to the highest ridge of Anysberg through fields of Protea eximia with flocks of Cape Sugarbird and Orange-breasted Sunbird was expertly navigated by Izak Lombard. Izak was clearly a good, caring, take-no-nonsense man who was always careful to check that a man who'd taken a tumble in the line was okay and good to continue. Luckily, the only first-aid that would need to be administered would be to the Landcruiser in the form of a puncture, as we started our third and final survey across the back of the mountains.

The route we picked followed the restio dominated valleys and seeps below the rocky crags and soon we'd left the high Anysberg behind us and were struggling through 50 year old plus fynbos. The last leg of our 11km survey proved rather barren, with a last gasp Cape Clapper Lark on the final marker. Looking back up the mountain, it was clear we'd given the mountain our best shot. I'd hoped that we'd be able to turn up a new species for the Anysberg list, and we'd played Striped Flufftail calls at the seeps and Protea Seedeater in the old protea stands, but our reward for our efforts instead was to be the sense of camraderie of a hard task completed together with tales to be regailed at other camp fires for future expeditions.

A big thanks to Marius Brand and the men of Anysberg: your energy, enthusiasm and willingness to share your knowledge made this truly a trip to be remembered. 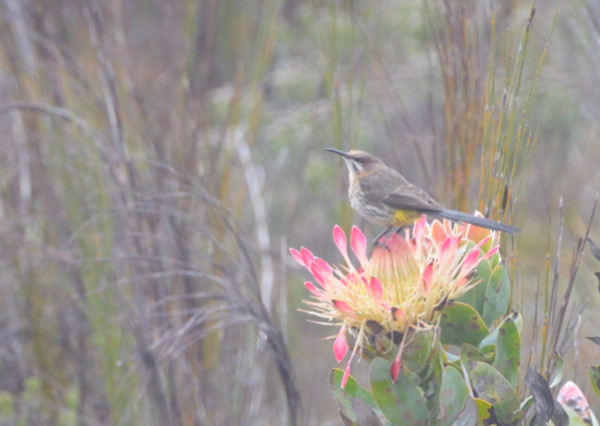 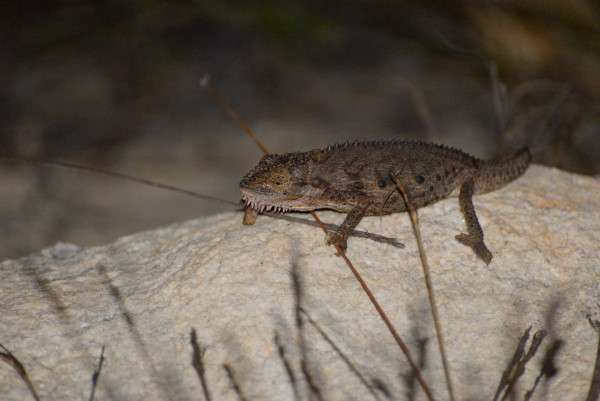 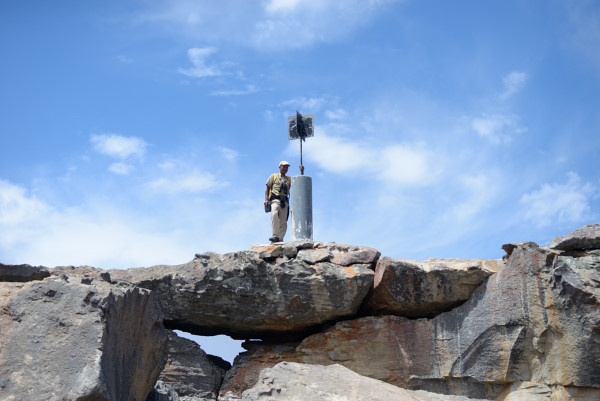 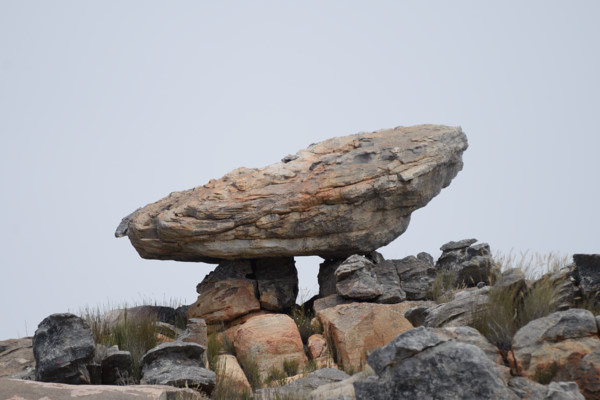 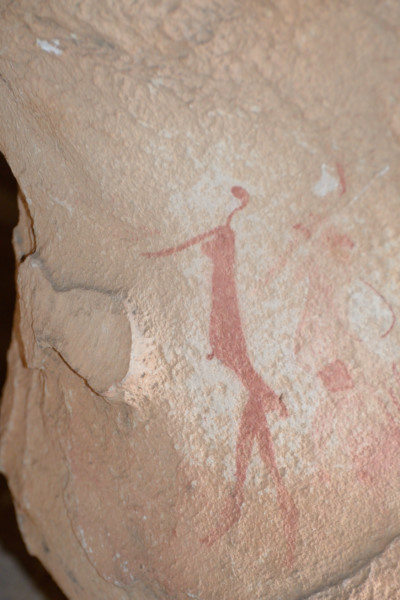 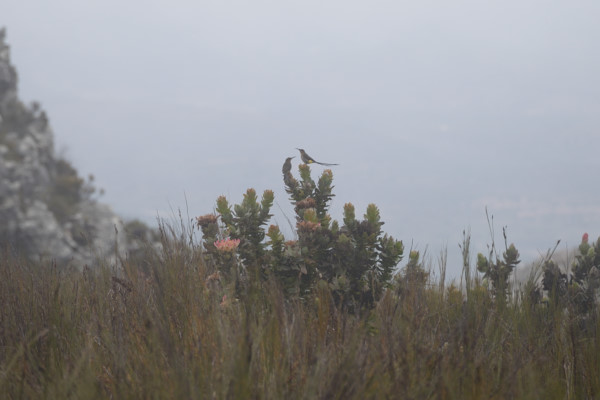 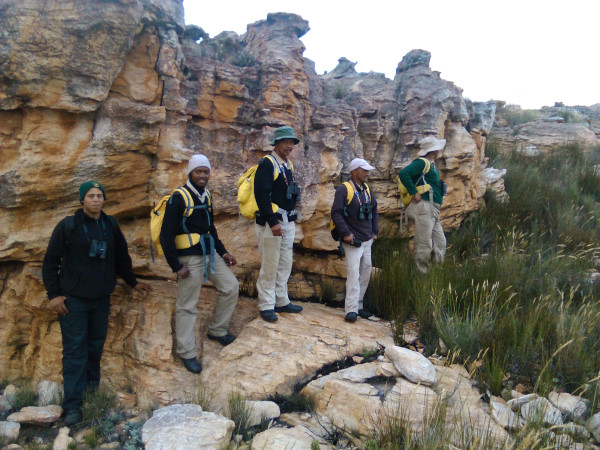 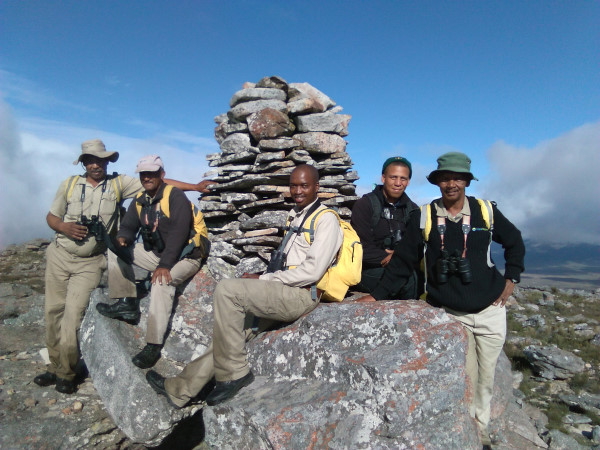 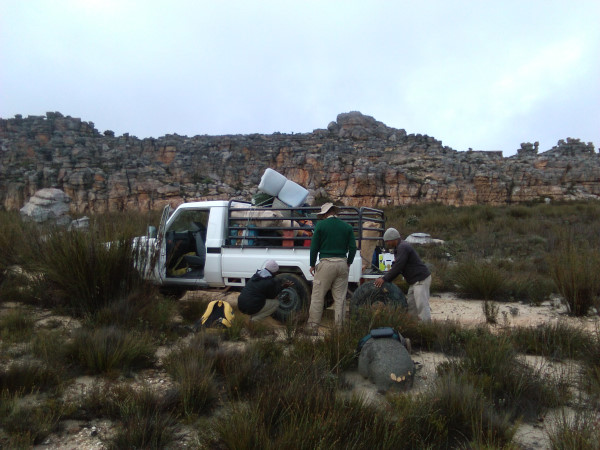 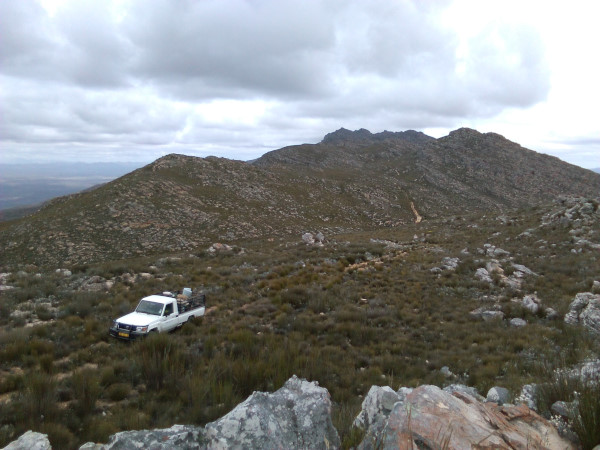