The quest for the fynbos enigma: The start of the Hottentot Buttonquail surveys

According to draft versions of the latest South African Red Data Book of Birds the global population of Hottentot Buttonquail Turnix hottentottus, a range-restricted fynbos endemic, is estimated to be <1 000 mature individuals. Given that it is suspected the global population is likely to be in decline owing to on-going habitat loss and degradation, the species has been classified as Endangered by IUCN red-list criteria.

This species may be the most thinly distributed of South Africa’s endemics and one of the least frequently recorded resident and breeding terrestrial birds in general. However, the true extent of the bird's distribution, population and population-trend is unknown, especially since it is likely widely unreported due to it cryptic nature. During biome-wide surveys of the fynbos conducted during 2012, I did not record the bird. I did record it sporadically during 2013, when I also became aware of their calls in locations where I was consistently monitoring Cape Rockjumpers.

None-the-less, the need for a systematic survey has been long overdue. Dale Wright of BirdLife South Africa has been pushing for a survey for some time now, and involved in fundraising work for a dedicated project as part of his Western Cape portfolio. With test surveys conducted with Biosphere Expedition volunteers last month, we can regard the survey as being now officially underway.

The surveys are flush or beat transect surveys using multiple people who walk in a line spaced about five meters apart. We also do Hottentot Buttonquail call playback every 200 to 500 meters, depending on the length of the transect, during which time we also data capture aspects of the environment, such as time since fire, vegetation cover, and the dominant vegetation classes. To gain comparative density estimates, we also record a few other terrestrial bird species such as other game birds (francolin, Common Quail), Cape Rockjumper, Long-billed Pipit and Clapper Lark; as well as any flushed mammals.


This survey would not be possible without the incredible skills, focus and drive of Dale Wright, without whom this project would not exist. Dale's sense of duty of care to the birds of his domain in the Western Cape is outstanding – no one else has so far been brave enough to tackle supporting a survey for this bird due its scarcity and hence where any survey would likely lack tangible encounter data. Thanks to BirdLife Overberg and Anton Odendaal for the fundraising efforts and donation to BirdLife South Africa that got the ball rolling on this survey. Thanks to the Percy FitzPatrick Institute for their continued support. 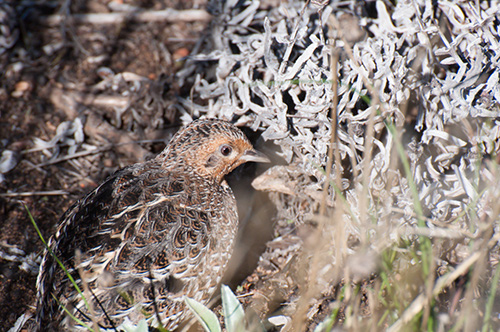