The CapeNature Swartberg ranger I gave a lift to Oudtshoorn recently had never been to Besemfontein. In 2012 during my trans-fynbos survey I'd missed it on rumours it was closed and out of bounds, and opted to climb the 7weekspoortberg next door instead, being the highest peak in the Western Cape with no associated trail and hence not closable.

But it is such a clear and inviting trail on Peter Slingsby's map of the Swartberg and Klein Karoo. I would later hear a Mountain Club SA expedition had scaled the 1999 m peak overlooking the Seweweekspoort. So this time on our quest for the Hottentot Buttonquail I obtained permission from the Swartberg Nature Reserve manager to visit this area.

The origins of this trail are lost in the mist of time it would appear. A google search reveals no information for this trail (except a hikers club note that it is closed). But there is a functioning hiking hut at the base, a beautiful CapeNature sign, and clearly a lot of energy was put into preparing the trail as I would later see.

For my survey I had roped in the assistance of my wife, Anja, as the Buttonquail project had not yet had secured any volunteers. On Friday after a morning survey of the Swartberg Pass with CapeNature field rangers, I met Anja and family at the Stone Cottage, a privately run guest house north of the Seweweekspoort. The Saturday morning, leaving our children in the care of my parents, we set off at 6:30 am for the trail head. The previous day I'd spent a bit of time scouting out where the unmarked entrance gate was, as well as running around trying to track down the landowner for permission to cross the strip of private land that separates the dirt road to Gamkapoort dam from the Swartberg Nature Reserve. Thanks to Jaco Hunlun of the Seweweekspoort Guest Farm for the necessary permission.

Although CapeNature maps listed the veld of the area to be between 11-15 years, it was clear a large fire had swept through the area earlier in the year. We were surprised to see the wooden hikers huts still standing, albeit if there had been 3 buildings, now there are only two. Already in fynbos at this stage, we started the surveys.

Our ascent line followed the jeep track that is the Besemfontein Crest Trail and heads straight for the summit, via a few twists and turns. We quickly picked up Long-billed Pipit, a target species for the flush survey as it is a terrestrial bird likely to be flushed from which we will be able to make comparative density estimates. When we heard our first Cape Rockjumpers and Ground Woodpeckers I said to Anja “I bet if you look on the GPS our elevation is around 1400 meters.” Sure enough, 1440m. This looks to be the altitudinal threshold for this species in the Swartberg.

After a long ascent the track ends at a turnaround point with a view of a communications tower that likely marks the Besemsfontein Peak. We gave it some thought, but it was clear that we would not be able to manage the short ascent (probably about 1km) and complete the full hiking trail in the time available. It was clear that with the recent fire we would have a unique opportunity to follow the trail, which ran as a clear scar across the mountains, likely to be quickly overgrown in the years to come. So we flush surveyed down into the valley across old glacial moraine, resprouting restios and watsonias, to a kraal structure (or overnight camp site?) at a stream in the valley below, for a well earned lunch.

We then made rapid time on the eastern leg of the trail (Besemfontein Trail), and soon we had views of Gamkaskloof in the folds of the mountains ahead of us. Mountain streams cascaded in the valleys below us, Jackal Buzzards eyed us suspiciously from above. Small patches of unburnt fynbos kept us captivated with the glorious array of flowers and floral structures that makes the fynbos so special, a nice change from the short sprouting grass in the burnt areas.

Eventually the trail brought us to the intersection of two crystal clear streams, where a pool at the foot of some cascades provided a welcome wash. But time was ticking on, and we abandoned surveys at this stage realising the last leg of our trip could well be by torchlight. The trail conducted some painfull switch backs of the kind that make you feel like you are getting nowhere. These culminated into the view of a deep canyon below us... where the trail clearly continued. Already tired, the elevational changes we would have to endure to get out put a new and aching perspective on things. We still had a long way to go, and gave up taking photos of the pretty flowers, spectacular views of gurgling gorges and the trail itself – built up in a style reminiscent of the Inca trails of Peru.

In the canyon, we startled baboons, which lined the the canyon walls to speculate at this unusual spectacle of human hikers. We also passed very surprised dassies, and an old leopard scat. When finally we'd slogged out of the canyon and joined the old jeep track (Verlorenhoek Trail) that would carry us back westwards and home, legs were very tired and eyes stuck to the ground for the long haul out of the mountains. The final tally on the GPS when we were back at the car just after 7pm was 28 km.

The weather on the route was beautiful, as good as one could hope for a long day in the mountains. Jackets were tucked away early, and there was plentiful water in the mountain streams to slake our thirst. The scenery was breath-taking from start to finish, first with views of the Karoo plains to the north, then glimpses of the Rooiberge of the Klein Karoo to the south, followed by the deep valleys and cliffs of the Swartberge themselves and put into perspective with the view of the road to Die Hel (Gamkaskloof). The path was clear and in good condition, but resprouting plants (especially proteas) mean that in a year or two the trail will be buried until the next fire. A pity, as it really is incredible. On few other trails is one so isolated from any sign of human existence. We are privileged to have had this experience, and grateful to the efforts of the trail makers from a bygone era for creating an enduring path. This really could be South Africa's 'Inca Trail' with very little effort. 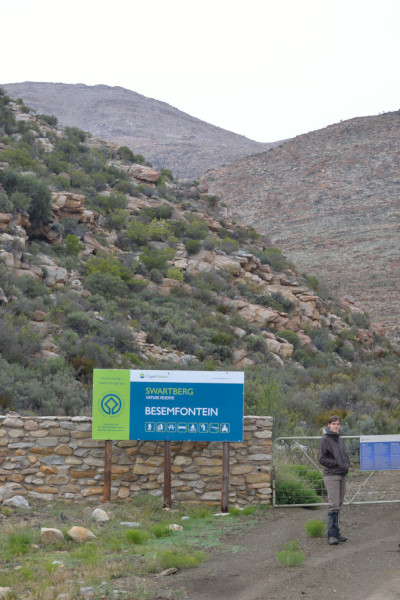 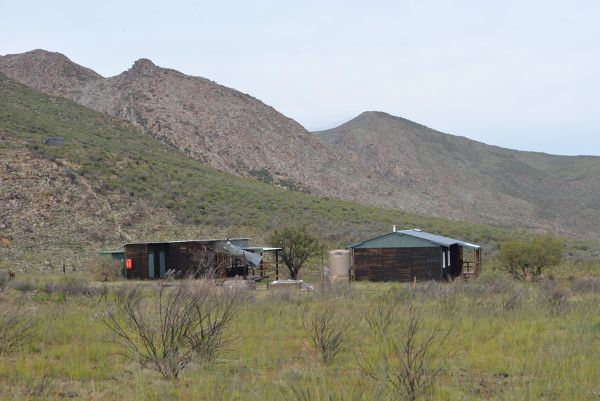 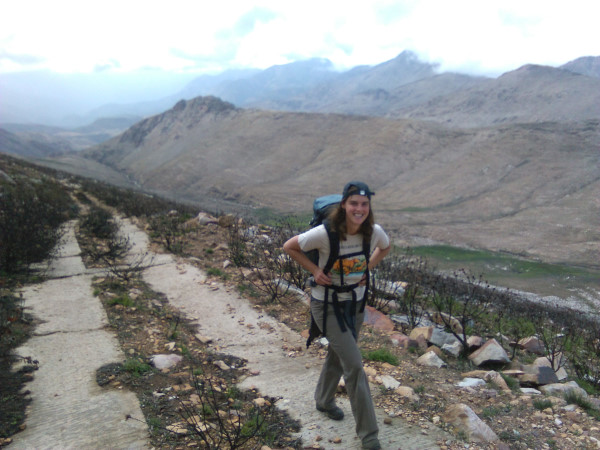