I realised a while back that the start date for the cycle on the blog was 25 January, but I had to push that to 1 February as today, 28 January, is a special day in this part of the world – it's Coordinated Avifaunal Roadcount (CAR) survey day (read about previous CAR expeditions here).
So, gearing up for the cycle survey, I decided that this CAR should in fact be done by bicycle. Route WU08, which is our route that runs along the northern edge of the Baviaanskloof, is in fact ideal for a cycle survey. It runs for 40km along a quiet gravel road with nearly no traffic, starts in Renosterbos at 1100m and drops steadily down to succulent Karoo, finishing at an altitude of 670m. The survey protocol involves stopping every 2km, so it really isn't tiring. 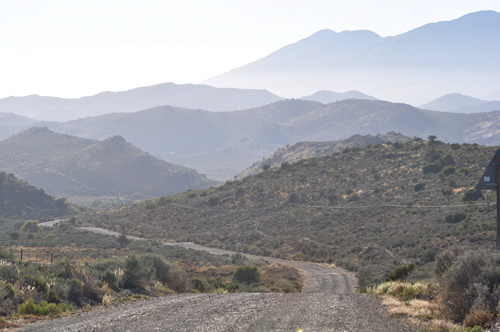 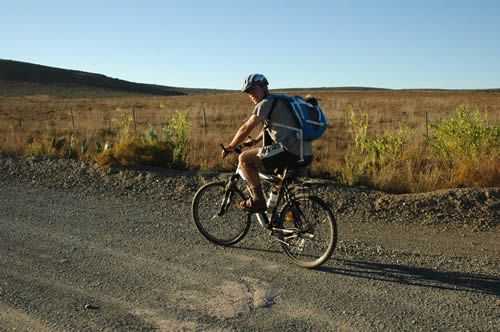 The start of the route is 50km from us, so I decided that bit would be a bit much too traverse in the dark, with a normal set off time at 5:30am. Chris and I headed out as the early morning light caught the top of the Swartberg. The going was slow as Monday had seen very heavy rains, which had left the gravel roads a mess. A good omen was the sighting of 4 Blue Cranes flushed up from a flooded gravel pit on the side of the road; they flew next to the car long enough to consider taking a photo, but not long enough to actually get the camera out in time to take the photo. Chris dropped me off at the start of the Winterhoek road, and headed off to the Swartberg to do some geological surveys.
In the distance I could hear Karoo Korhaans, which put me in an optimistic mood as I headed down the Winterhoek road. However, 20km into the route and I was getting desperate! No sightings! Then two groups of Karoo Korhaan side by side, right next to the road. Yay! Those would be the highlight of the survey, apart from some last gasp Blue Cranes in the final kilometer. Lots of other wildlife kept me distracted, including Kudu, Duiker, Steenbok, Vervet Monkeys and many goats. 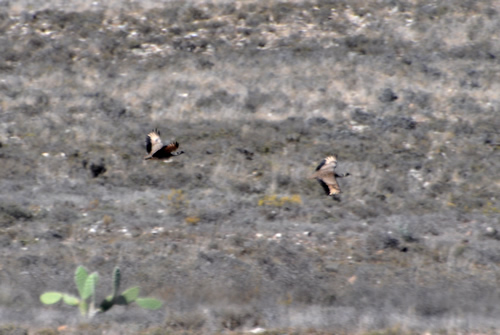 Just as I had settled down for my breakfast at the end, in order to restock for the cycle back, Chris appeared with the vehicle... so I got off lightly. He had not seen target species.... putting my mind to rest that there simply had been very few birds, as opposed to cycle surveying being a waste of time. All in all, a good day out.
If you are thinking of doing your CAR by bike, I'd say its probably more fun and productive with 2 people. I use a binocular harness – otherwise your bino will hang too much on a normal strap. A normal cycle computer can tell distance for the 2km stops, I used a GPS for extra accuracy, and to give me extra info such as altitude. I'd say any route in terms of traffic and surface is doable – after all a car gets in the way of traffic on busier roads. Routes longer than 40km should probably still be done by vehicle.