How to catch a Klipspringer


Firstly, to the uninitiated, a klipspringer is a small type of antelope – probably smaller than a Roe deer. They live on rocky outcrops and are very cute. One of my first memories of a klipspringer was watching one run up a near vertical rock face, pause in the middle to look at me, and then continue up the rock face. 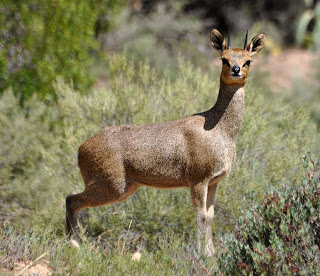 One afternoon I was out playing with the irrigation on one of our fields. Next to the field is an old brick reservoir, maybe 25m wide and 2.5m deep. It’s cracked and unusable as a dam – it has trees and plants growing in it! Well, while I was playing with the irrigation I heard this clip-clippity noise from time to time. I’d look up into the hills and not see anything. The acoustics of the dam meant I was unable to locate where the noise was coming from. Eventually I figured out there must be something in the dam. I snuck up – and saw a sub-adult klipspringer running around and trying to jump out. Although it could get to the edge of the wall, it could just not get over the top. I dropped an old drum into the reservoir to give it something to jump on and out and then left, as my presence had it quite stressed.
Later on we went to have a look at it. It was still there. So we got a bucket and put some water in it so it could at least drink. With the bushes in the reservoir, it should have had enough food to eat. Then Chris and I nailed some roofing tiles onto an old wooden ladder and put that in the reservoir. We also placed a large packing box into the dam.
But the next day it was still there. I had a go at trying to catch it, but that was futile. The little klipspringer was far too quick and agile for me. We decided to have a go later on in the dark, to try sneak up on it and throw a blanket over it. But it heard my approach and started running around, trying to jump out again. We were really worried it would injure itself. Chris noticed that it would often try and jump out at the same point on the reservoir, and then come down on the packing box we had left nearby. He had the bright idea of turning the box around so the open end was up and sure enough, the next jump the klipspringer made it fell into the box.
From there on it was easy enough. I closed up the box, lifted it up to Chris and we let it go on the edge of the field.
A few days later the resident pair of klipspringer were in the company of a subadult again – we like to think the family are reunited. 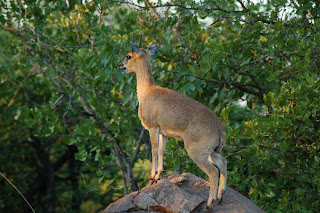