The Jackal Buzzard (Buteo rufofuscus) is a southern African endemic common in alpine grasslands. The name comes from the call – which is eerily similar to our common fox-like scavenger, the Black-backed Jackal. It is one of the most beautiful buzzards - with red tail, chest and beautiful wings. 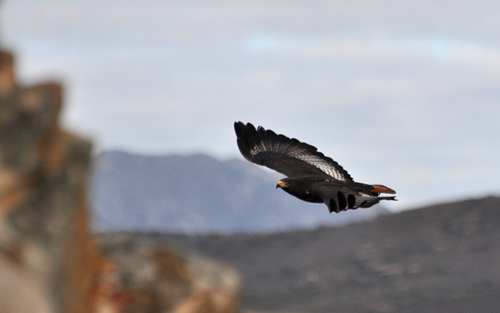 We often see or hear Jackal Buzzard as we have at least two resident pairs on the property. They put in a brave appearance when the Verreaux's Eagles pay a visit – and I've witnessed some spectacular aerial battles.
At one time I thought I found the nest of the closest resident pair, but climbing up the rocky hill to investigate it was clear that it had not been used for a long time as there were no fresh sticks, and instead of an egg, in the middle of the old nest was a large, bright–green baboon turd. So the nest has been adopted by someone from the local troop.
The last two days I have been ringing at a stream that under dry conditions can produce a good haul, but with the general good rains the last few months, birds are spoiled for choice and the catch was small. However, I did notice that the Jackal Buzzards were present at the site of the old nest, so I went to investigate. They were very defensive, but the nest is still abandoned – perhaps there is one nearby I have just not found yet. This would be the middle of the breeding season, which starts in September, according to historical nesting data from the region. 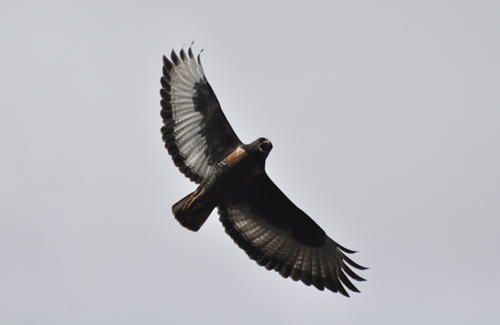 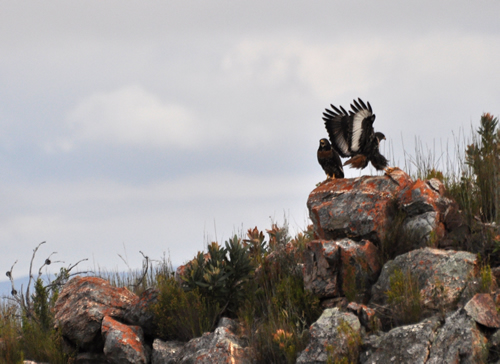 When I first moved to Blue Hill Escape and was exploring options for opening hiking trails, I was amazed by how many Cape Sugarbirds there were. The males would give their trilling display calls down the valleys, tails streaming like banners behind them. The trail I opened up I called Sugarbird Valley as a result. That was in April 2010, it was a drought year. By November, walking that trail, one was lucky to see any Sugarbirds at all. The proteas had stopped flowering, and the sugarbirds had moved on. I was not aware of any other patches of flowering Proteas around Baviaanskloof, or even seen any in the Prince Alfred's Pass through the Outeniqua mountains on the way to Knysna. So where had all the Sugarbirds gone to? None of the bird experts I asked could give me a satisfactory answer as to the extent of the bird movements. 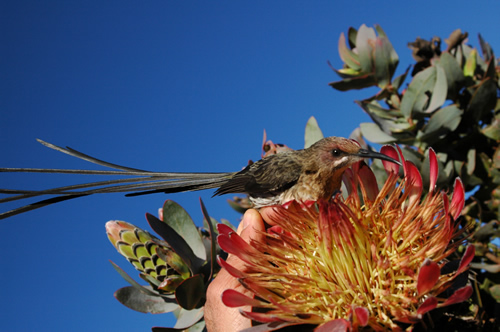 Apart from Roberts Birds of Southern African VIIth edition, the other place to seek out information on birds is the The Atlas of Southern African Birds and the SABAP2 website. According to the Atlas, the longest movement record for a ringed sugarbird is 160km, but no average is given. It is noted that sugarbirds, like most nectarivores, are resource trackers – so they move in response to food availability. Sugarbirds specialize in feeding on a variety of protea species and these mostly flower during the winter months. What they do during the summer months, when few or no proteas are flowering, is poorly understood.
SABAP2 is particularly interesting as it allows one to compare the atlas conducted largely in the 90s with the atlas being conducted at the moment. Most of the Fynbos occurs in the W. Cape, which allowed me to easily count up the quarter degree grid squares where sugarbirds had been recorded during the two atlases. I was alarmed to find that the number of quarter degree grid cells where sugarbirds are found has decreased by 18%. By way of comparison, Malachite Sunbirds, which also feed on proteas in Fynbos but are generalist nectarivores and so not tied to proteas in the same way, have only shown a 10% percent decrease in reported range. Still, this decrease is not as bad as for two Fynbos endemics: the Protea Seedeater (down 48%) or Cape Rockjumper (also down 48%), where the decrease in range and the increase in fragmentation is cause for serious concern. In fact, in my opinion these species should no longer be classified as Least Concern as they approach IUCN Vulnerable status under both range criteria (<20 000km2 coupled with fragmentation) and decrease in relative abundance of >30% in a period of 10 years.
As such, with most of Blue Hill Escape consisting of mountain fynbos (with lots of proteas), and since I have recorded all the Fynbos endemic bird species here, this is now the area I am focusing my research attention. Luckily, my cause has been recognised by Phoebe Barnard at the South African Biodiversity Institute (SANBI), who has signed me on as a postdoctoral researcher. Phoebe's research focuses on the impacts of climate change on the Fynbos avifauna.
So, what have I learnt about Cape Sugarbirds so far?
While training to be a ringer, Mike Ford showed me that the most reliable way to tell male from female adult Cape Sugarbirds is actually not in the tail – which can be short in males after a moult, but actually in what is known in the 'paddle' of the 6th primary feather in the wing. This apparently makes the rattling whistle noise during the male display flight.
Second, the tongue of the sugarbird is an amazingly delicate bottle-brush. This must act as a kind of sponge to help get the nectar from the protea flower nectaries, which are buried deep within a mass of styles and stigmas.
Thirdly, sugarbirds have extremely sharp and powerful claws, given their size. I've been told this is so that they can hold onto swaying protea flowers in strong winds – but other nectarivores like the sunbirds seem to do fine with a 'normal' claws. From experience, the claws are stronger and more capable of piercing flesh in the male sugarbirds, and I suspect that these are weapons with which male sugarbirds defend their patch when their display flights don't have the desired affect on rivals. However, I am not aware of any lethal battles being recorded for this species by other researchers, so we'll have to see if I can prove that theory.
We have 5 Protea species on the property. The most abundant, Protea repens, started the flowering season this year at the end of January and ended around April. Then Protea lorifolia came into flower (small numbers) and then Protea punctata and abundant Protea neriifolia from May or so, peaking in August. During this period I had the massive sugarbird captures (60 in one day!). Now Protea eximia is flowering and this protea is found only high up in the mountains in small stands – about 5 hectare patches as opposed to the 50 hectare or larger slopes for the P. repens and P.neriifolia. Where will they go after the P. eximia has stopped flowering is the big question. How far are they travelling? How vulnerable are populations now in our human modified landscape? How many sugarbirds are left in the fynbos? These and many other questions I hope to answer in the course of the next few years, with lots of ringing and point count surveys.
This study will take me across the range of mountain fynbos, from the Cedarberg to the Cockscomb. I can't wait to get started.
1 comment:

Jump for Joy for a Rockjumper

Yesterday I was on a mission to look for good groups of birds to put up the nets for the next two months 'saturation' ringing attempt. I was just heading up Sugarbird Valley when an unusual trill had me scanning the slopes. Could the perched silhouette on a rock be a Cape Rockjumper? I had to scramble up a steep slope to find out and was rewarded with a nice family group of this most attractive of the Fynbos endemic birds. The group consisted of 2 males and a female. Most of the time they were quiet, and perched, or scampering among the rocks.
I had compromised on lenses, taking only my 300mm, as I had not meant the day to be a photography day due to the length of the hike I envisaged. Anyway, my first Rockjumper photos. Several other nice birds crossed my path, and the veld was alive with wildflowers. By the end of the day I had an endemic clean-sweep for my pentad, with Cape Sugarbird, Cape Siskin, Protea Seedeater, Victorin's Warbler and ubiquitous Orange-breasted Sunbirds. Some highlights:

The blog has been quiet this month, partly because I was in Cape Town for a week to present a seminar, but also because the two weeks prior to that I was busy all day with a chainsaw. The task was to deal with the invasive Australian Acacia species clogging up our stream. Thankfully, the Department of Water Affairs and Forestry allocated money through the Working for Water program so that we could basically employ 10 people for 10 days in order to cut down, cut up, and stack branches of all the wattle in our stream. The wattle sucks up the water and shades out all native vegetation, so very bad for biodiversity. The Working for Water program means we get help clearing the aliens, and local people get work. Win-win.

We will have to conduct several follow up operations in order to clear the seed bank. In the meantime, we have lots of seedling indigenous trees in bags which we will eventually plant out to recreate some natural forest.
1 comment:

This is what the hill opposite our entrance gate is like at the moment - all purple! That is thanks to a prolific show of some member of the Ice Plant family. 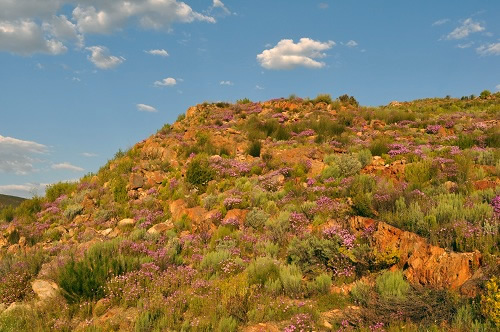 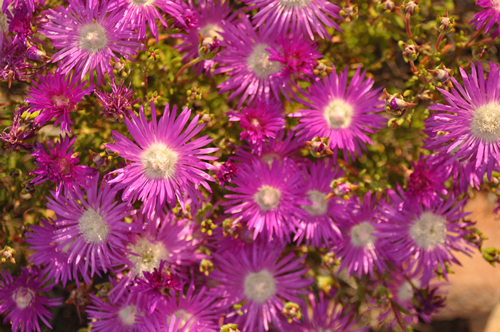