Fighting Fire in the Fynbos 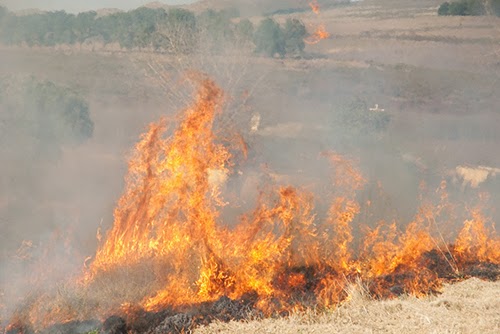 Wildfires are spectacular forces of nature, and terrifying if you encounter one live. Living in the Fynbos you are living with fire. Fire is part of the natural cycle of life and the plants are adapted to it. However, we live in changing times – and in the eastern Fynbos fire is becoming more frequent and burning over wider areas. Part of this is due to changes in our weather which are causing increases in Fire Danger Indices (FDI), partly due to increased lightning strikes.

I learnt at Fynbos Forum last week, increased summer rainfall means that the southern and eastern sections are experiencing more summer rain and this means fuel loads are recovering more quickly.  Generally, this is all of great concern to landowners, because fire is a threat to human safety, housing, crops and livestock. Furthermore, landowners are liable for damage from fires that spread from their property to neighboring properties. In the case of those living near pine plantations, this can mean millions upon millions of rands. There is much concern from Fynbos ecologists that as a result the fire cycle in Fynbos is being interrupted because fires are suppressed, and in situations like this Fynbos is then replaced by forest.  We now have a situation where much Fynbos in the lowlands in association with human habitation and agricultural activity is under burnt, while on the other hand the mountain regions are experiencing too frequent fires. Neither extreme is good for Fynbos.

Legally, landowners need to have fire breaks and adequate fire fighting equipment on their properties. However, one hike into the Cape Fold mountains and you will realise that the feasibility of creating and maintaining fire breaks many kilometres long over steep terrain intersected by deep gorges is completely impractical. Likewise, accessing remote areas where fires can result from lightning strikes or even rockfalls is sometimes impossible.

Landowners across South Africa are now being pushed to join Fire Protection Associations, where resources are pooled, and fire control can be done on a bigger scale, thus mitigating the need for each landowner to have fire breaks. However, these associations cost a lot of money to be a part of and many land owners are sceptical of the benefits they bring. For instance, as part of the big fire we experienced in 2012 we received no support from the Southern Cape Fire Protection Association (SCFPA). Subsequently, some landowners in the area did receive compensation for fencing damage.  More recently, they have arranged for insurance premiums to be reduced for members of fire protection agencies. It is clear that these associations are now starting to work harder to justify membership.

We experienced our first tangible benefit of being members of the SCFPA this week when they sponsored a one day basic fire fighting course at Avontuur.  A massive amount of background theory was assembled by Dirk Smit of SCFPA, and presented along with interesting anecdotes by local fire-fighter Wayne Young. Of course, the real entertainment was then setting the veld on fire and letting the trainees get to grips with the mopping up operations.

Here are a few highlight photos: