The new SABAP2 website (sabap2.adu.org.za) has introduced some new data formats and data terms. One of these is the Sequence Index. The sequence index is the average position that a species normally occurs on a list, and is expressed as a percentage on the SABAP2 website. Unlike the traditionally used reporting rate (how often a species occurs on a set of lists, also usually expressed as a percentage) where a high score is indicative of high abundance (and/or detection), a high sequence index indicates lower abundance (and/or detection) i.e. it took a long time to detect a species, indicated by the fact that many other species were reported before it. Simply put, a rare species should have a high sequence index and low reporting rate, while common species should have high reporting rate and low sequence index. This is probably easiest to see for a migratory species, e.g. Barn Swallow, which is absent in winter. Here the sequence index (yellow line) goes up over the winter period, while reporting rate (blue line) goes down, and then up again over summer. 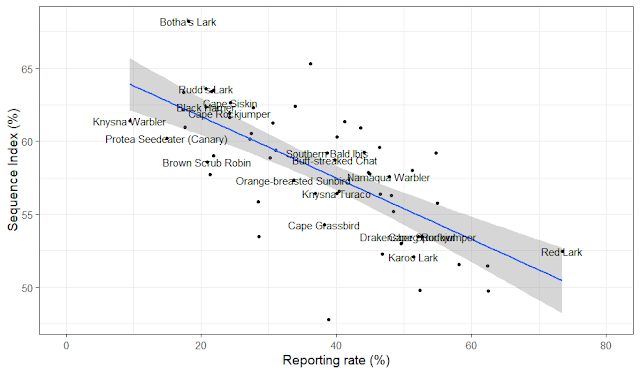 While both indices thus give indications of apparent abundance (and/or detectability), there is an important distinction in how these are calculated: reporting rate is calculated based on the number of lists where a species was present or absent; while sequence index is calculated from IF a species was detected, what position on the list did the species hold? This apparently subtle distinction does have implications though: for instance, with the BirdLasser revolution lists now have fewer species compared to the period before, for reasons we won’t explore here. This means there is a small, but significant, probability of NOT reporting a species. This means that reporting rate can appear lower but in this situation this does not reflect a change in abundance; it is a change in reporting probability. It appears that the sequence index on the other hand is robust to this change, given it is calculated independently of the number of cards submitted. The sequence index is thus an additional useful tool in the box of information that SABAP2 can deliver.