Killing Crows in the Karoo

This is the original text of an article published in African BirdLife magazine (Lee, A.T.K. 2018 Killing Crows. African BirdLife. Nov/Dec: 13-14).  The published article text is slightly different, and I use this opportunity to showcase several illustrative photos that were not published.

“What do you think of the crow problem?”, asks the owner of the Williston Mall. “There never used to be this many crows”, says the wife of a farmer east of Loeriesfontein. “I hope you’re here to do something about the crows. There are millions of them along the train line”, says a famer east of Kenhardt on seeing the BirdLife SA logo on the bakkie. Almost everywhere we’ve gone crows have been a topic of conversation with the landowners and residents of the Karoo on the subject of birds. In a few cases Pied Crow are indicated to be useful: they show where jackal or rooikat have taken a lamb. But in most cases, “Ek haat n kraai” is not an uncommon thing to be heard said by anyone in the sheep industry. After all, you’re an easy target to hate if you’re pecking the eyes out of a new born lamb. Reminiscent of the albatrosses on Marion Island, I was told one story of the skin pecked quite clean off the head of a lamb. The lamb was still alive.

Starting the survey of the birds of the Karoo, a pet project of mine had been to ask, “what is your favourite bird?”. The answers were diverse, indicating that the beauty of birds lies in their diversity: there are as many ways to please as there are birds. Unpopular birds included noisy birds: hadedas, Egyptian geese and even Black Korhaan, or damaging birds e.g. weavers. But the answer for roughly ¾ of the question relating to problem birds was “Witborskraai” i.e. Pied Crow.

It is rather unsurprising that crows are on the rise: we’ve done everything to make conditions great for them: we’ve built them predator inaccessible nesting structures in the form of telephone poles and pylons; we provide a steady source of food in the form of roadkill and rubbish dumps; and we’re changing the climate just the way they like it. It’s not just John Fincham that’s noted the collateral damage to other biodiversity: one farmer on the road to Pofadder had collected a jar of tortoise shells that he attributed as victims to Pied Crow. Several other people we spoke to have wondered about the decline in raptors and other bird species that could be attributed to Pied Crow taking eggs and chicks. Harassing of raptors is frequently reported. However, the impacts on biodiversity have yet to be properly established.

While Pied Crow make every pentad list in the Karoo, our initial density estimates indicate that their actual density in terms of birds per square kilometre is not particularly high i.e. their high detectability because of their size, colour, calls and habits gives a false impression of high abundance. A murder of crows associated with a rubbish dump or roadkill can make quite an impression. But perhaps there is already a solution to the ‘crow problem’ unfolding, in the Karoo at least, because: “n Boer maak n plan”.

Pied Crows are one of the species on the long list of ‘pest’ animals considered legitimate targets for reducing stock damage. Farmers were quite open in their methods for crow control. There is hardly a farmer out there that can’t handle a gun, so it’s rare to see a perched or relaxed crow near any farmstead: they have quickly learnt that humans equal danger in the form of a deadly bang. Given the collapse of Telkom infrastructure in the Karoo, they also increasingly make their nests on windmills, where it is easy to destroy nests or toss out the eggs. And while illegal, the use of poison was frequently mentioned, with poison applied to eggs, lambs’ tails, other birds caught for the purpose, or even livestock carcasses where jackal and caracal are also intended targets. The unintentional bycatch from this control methods is, of course, horrific: any of the scavenging raptors, mongoose and meerkats have been reported as collateral damage from such activities.

Pied Crow are an ugly manifestation of a changing world, a symptom of the human impact on the planet. Condoning the control of crows is controversial and likely unsustainable in the long term, but if we take care of the issues that led to their increase in the first place, then that solution is sustainable and can let us rest easy. It may be wishful thinking to restore a natural order of things: bringing back vultures to take care of carrion and capping carbon emissions, but if you don’t like crows, that is where your energy should be spent. The collapse of Telkom infrastructure in the Karoo providing easy nesting sites is already well underway. And in the meantime, if you’re not a fan of crows, you’ll look the other way when men are heading into the veld dressed in their battle kit. There are already hundreds of people murdering crows! 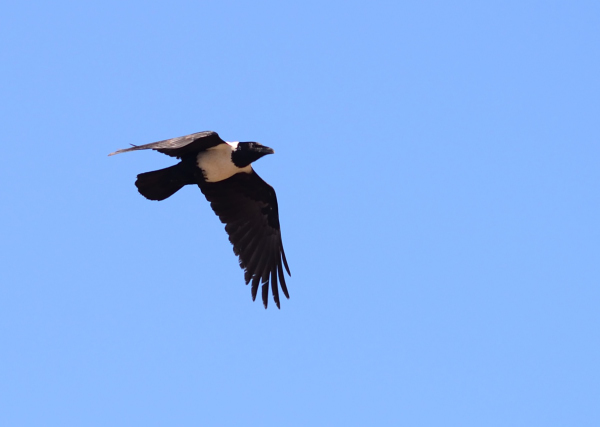 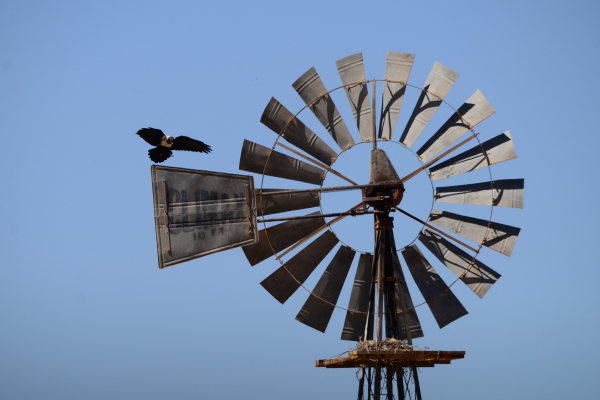 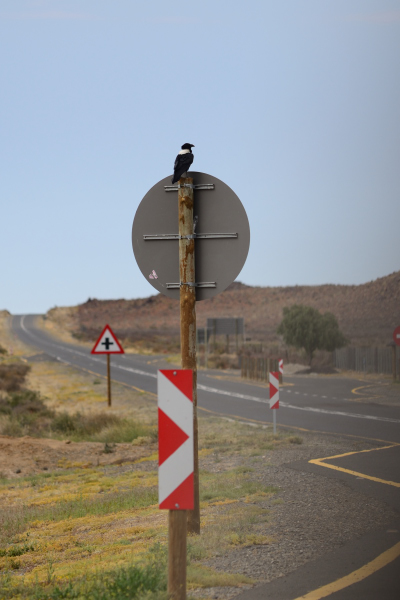 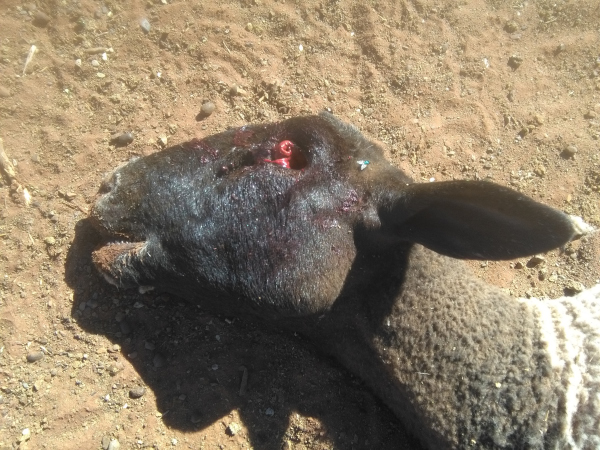 When I first drove through the Baviaanskloof, I wondered ‘Why would anyone call their lodge the Devil’s Gorge (Duiwelkloof)?’. It was only sometime later that I realized I was putting an ‘L’ where it shouldn’t be and the location is actually named after a symbol of peace: the dove. Certainly on asking connoisseurs of the Baviaanskloof where their favourite destination was, Duiwekloof has come up on a couple of occasions.

And it was the location that Anja’ chose to spend her birthday, which we have traditionally spent on a hike in the outdoors. Duiwekloof is highly rated on TripAdvisor, and since it is ‘just down the road’ for us (an hour drive), we decided we’d give it a shot. Camping at a location where there would likely be other children to play with to entertain our two seemed like a good idea. Mentally, I was expecting a location along the lines of the popular Doringkloof or Kudu Kaya. However, Duiwekloof would surpass all expectations. 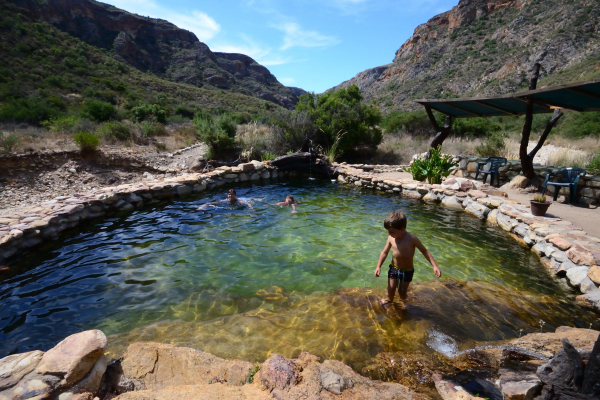 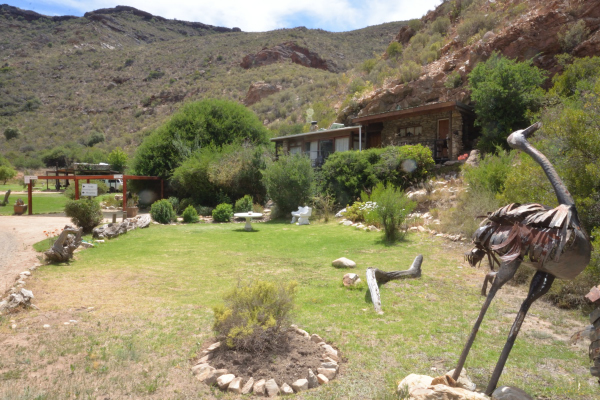 The camp and lodge are located up one of the side valleys of the western Baviaanskloof. The grounds are beautifully maintained and tastefully decorated and sculptured. There was nice green grass to set the tents up on, and very welcome shade netting over seating areas and car parks. The valley is dry, so there aren’t many big trees, so these were very welcome. Most importantly, there is a beautiful rock swimming pool for cooling off. For me, the most pleasant surprise was the lack of crowds: in fact, given the time of year, the location was practically deserted: only one other set of campers and perhaps two groups in the cottages were observed during our 2 nights here.

We started our afternoon with the main hike up to the head of the gorge, which winds up the dry riverbed, past ‘magic trees’, a small overhang with rock art, and other distractions, until the shallow rock pools deep in the cool gorge, defined by incredible folded rock cliffs reaching heavenwards, the lost fortresses of the endangered Willowmore Cedars. The ponds were home to endemic ghost frogs, while I was surprised to see Orange-breasted Sunbirds and Cape Siskins amongst the community of birds. 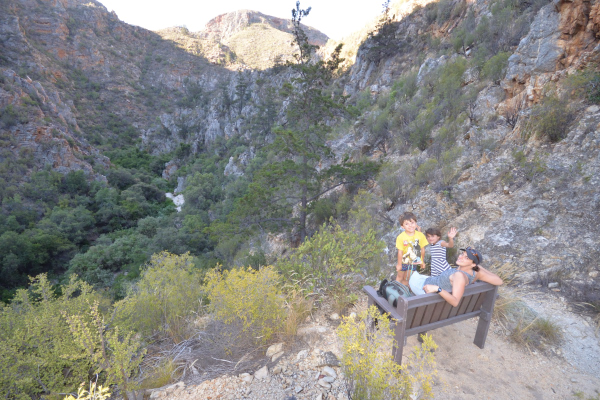 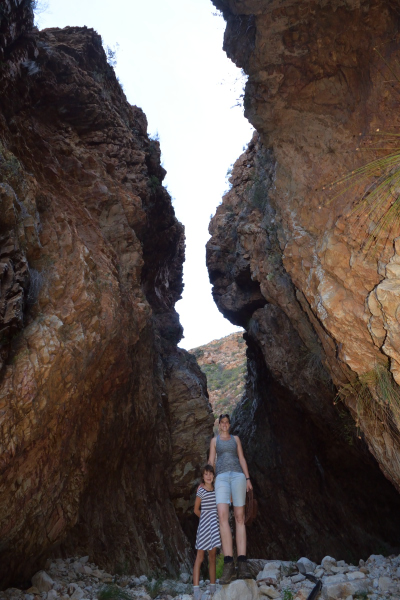 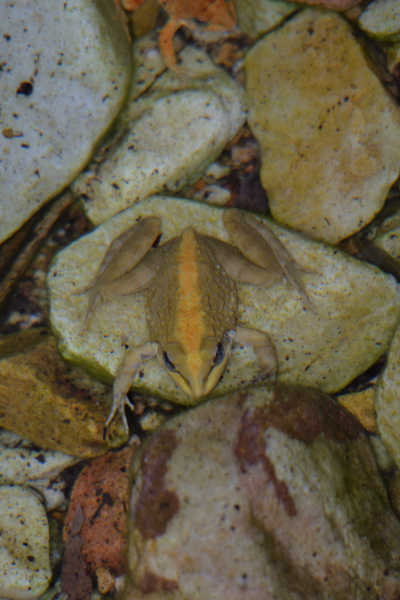 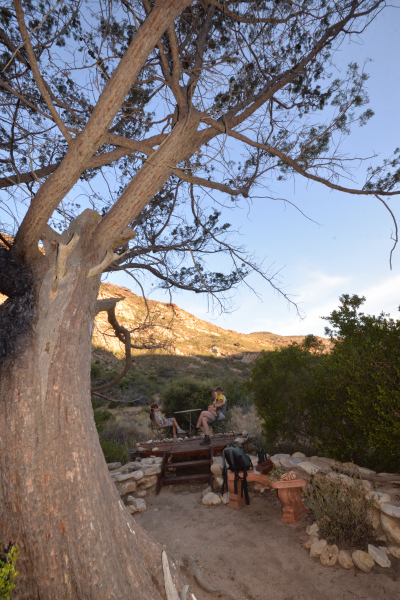 For our second day we decided to tackle the intermediate length ‘Crocodile’ hiking trail, with a diversion to the ‘Orrelgate’ or Organ Caves. These are part of the contact zone between the ‘Oervlakte’, a conglomerate layer overlaying the Table Mountain sandstone folded rocks that make up most of the folded mountains in the area. The hiking trails are very well maintained, with ropes or ladders in tricky places, although signposting is a bit sparse: we referred often to our photograph of the trail map available at the lodge. Still, views were spectacular in a way only the Baviaans can deliver, with succulent and spekboom slopes mixed in with elements of fynbos, cedars, and the Acacia thickets of the Baviaans river. We were back by 10:30, after 3 hours, by which time the heat was already beating down on us, and the rock pool much needed, not just by us but by a constant visit of birds and bees too. That evening the kids took me for a night walk back up the gorge, where most large rocks seemed to be home to a scorpion or two, easy to spot with our UV torch. 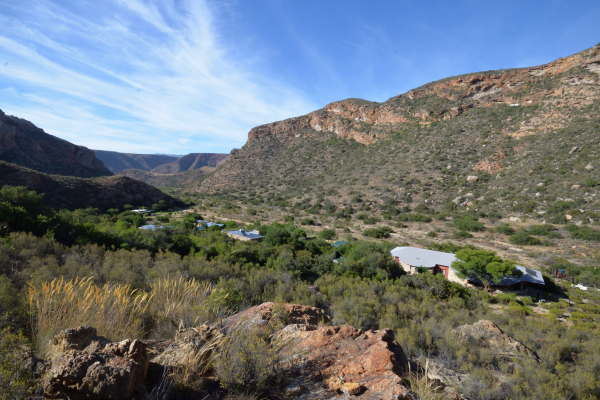 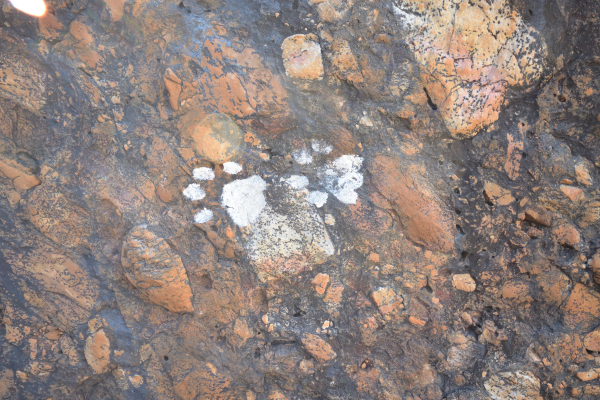 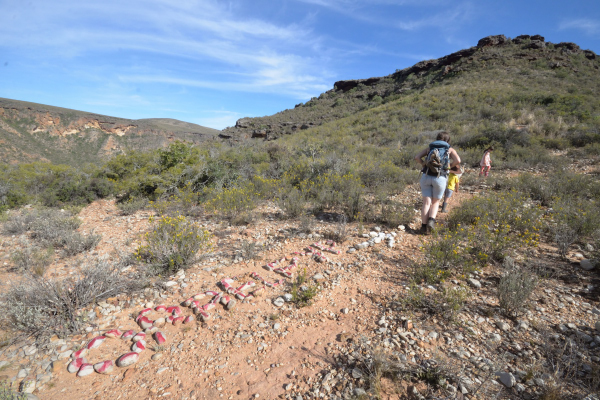 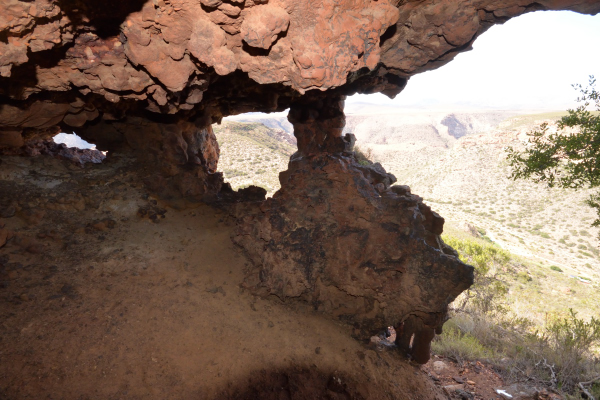 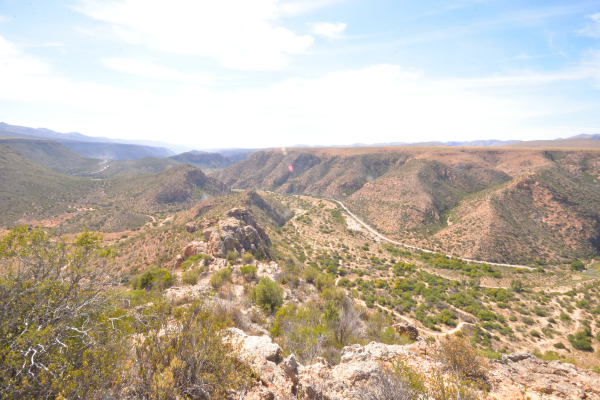 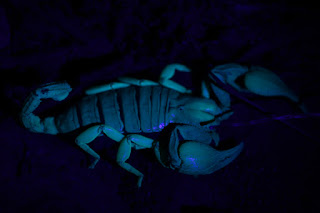 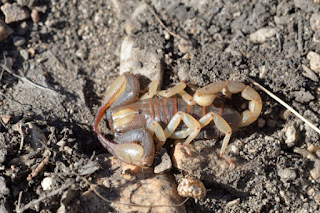 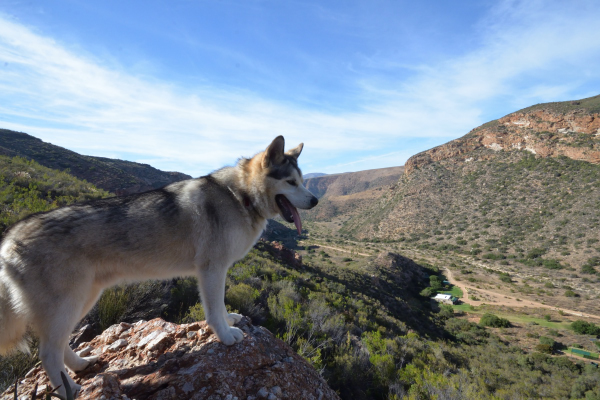 Chewy the Husky dog accompanied on all the hikes. Clearly, he is part of the Duiwekloof personality, and was frequently mentioned in the guest book. My feelings on the very friendly beast were ambivalent: it’s hard to dislike anything that friendly, but I’m allergic to dogs so had to shoo him away and endure his hurt look more frequently than I’d have liked. I’d also prefer not to have a dog on walks given I’d prefer to be looking for wildlife. At one point he bailed Elena off her feet while running past to catch up with us after chasing something into the bushes, and I didn’t appreciate his guard duties that involved waking me up with loud barking during the darkest hours of the night. Still, his attention to guests was impressive: he must have accompanied every set of guests we say on their hikes.

On our way out we spent some time in the Baviaans river, home to Hamerkop and African Black Ducks, as well as plentiful other birds in the riverine thicket. Overall though, extremely pleasant stay and very friendly staff. I could certainly quite happily have spent another night to fit in the Bakrans hiking trail.

Our campsite was R350 a night. Find out more at www.duiwekloof.co.za