I'm guessing you've never heard of it – I hadn't even a year after I'd watched the sunrise over it on several occasions on drives through the eastern frontier of the Klein Karoo towards Baviaanskloof. Technically, its another Cape Fold mountain island, this one connecting the eastern tail end of the Swartberg to the Baviaans mountains. It is delineated by Guarriepoort on the western edge, where the N9 cuts through between Uniondale and Willowmore, and on the eastern side by the R342 from Willowmore to the Baviaanskloof.

I havn't yet found out who Antonie is or was. Perhaps a local landowner with a particular fondness for high mountains. On top of the mountain my GPS altimeter read 1721m. It had been a hard climb – part of  a transect line to conduct point counts as part of the Fynbos Endemic Birds survey. It had started easily enough on a rough 4x4 track leading north from the game farm Elandspoort. But that trail wore out after a kilometer and I was left to scrape my way through 13 year old Fynbos for the next two kilometers of steep ascent, picking my way between malevolent Metalasia acuta and broken boulders. On reaching the ridge, the harsh winds keeps the vegetation at a manageable level and I was able to enjoy the view north towards Aasvoelkrans (the tail end of the Witteberg mountain range just north of Willowmore, named for vultures long ago eradicated by poisoning programs) and south towards Blue Hill.

The journey resulted in records of all six Fynbos endemics, and while the reason for the journey was a bit of a disappointment – it was to determine if the local Protea eximia patch was still being guarded by a contingent of Cape Sugarbirds – there were plenty of highlights and distractions that go with exploring new territory. One of these was a healthy population of Leucadendrom album – by far my favourite conebush with its silvery leaves and the red cone of the female. The orchid Satyrium humile was also flowering close to the beacon on the top of the mountain. And birdwise, while I had not seen much in terms of terrestrial bird numbers, was more than made up for by aerial insectivores: Greater Striped Swallow, Barn Swallow, White-rumped Swift and what I thought may have been Bradfield's swift (a large, brownish swift), but the photos I looked at later only revealed African Black Swift.

Thanks to Renier, manager at Elandspoort, for allowing me access, and the large cool drink that went some way to replenishing my energy levels sapped by the summer sun coming off the mountain. For a visit to Antoniesberg or the 5000ha Elandspoort game farm, contact Renier on: 0447711006 or  0826962325


Not more to be said really – last weekend on our summer Coordinated Avifaunal Roadcount we got 1 distant Karoo Korhaan sighting, and a last gasp pair of Blue Crane literally at the last stop on the route, which normally nets us at least 10. If we didn't have to stop and record Steenbok, we'd have been yawning all the way. Sods law also meant we saw the most interesting species before and after the count – a Black Harrier before the start, and a pair of Southern Black Korhaan 2km after the end. Not sure about why the low target species list, although the veld was looking rather dry.

It did give me time to notice a few disturbing things along the route: First were the dead leopard tortoises in association with Jackal proof electric fencing – basically a single strand electric line about 30cm off the ground. When a tortoise walks into, its reaction is to withdraw into its shell, and the results are fatal.

Second was this nasty scene – sometimes kudu don't get it right when clearing fences. I've witnessed it before on our property – a young kudu misjudges the height and instead of clearing the fence gets a leg caught between the upper and penultimate wire strands. With the momentum of the the jump, the animal spins around, locking the leg between the wires in such a way it is impossible to get out. The animal that I witnessed on our property do this I managed to free. The kudu in the photo below was not so lucky, and probably died of thirst where it hung.

Nice thing about the summer count is that there aren't the hordes of hunters around. This means we saw a fair amount of other wildlife, including many kudu – last winter count we saw only 1.

What's on that Watsonia?


Occasional quite cool and damp spells of weather have interrupted a January mostly described as warm and dry. Yet again we had a marvelous three days in the Kammanassie, with still, cloudy days and 150 birds in the nets over 3 mornings. Then back to Blue Hill, where wind and sun were always too high on the agenda to result in anything too exciting. So the photos below are from some action on a multicoloured bouquet of Watsonias flowering in a moist valley below the Protea eximia band dominated by Cape Sugarbirds.

In the meantime, David has made the grade to be qualified as a ringer (well done!), freeing me up from the nets to do point counts on a more concentrated scale in the Baviaans, Kougas and Tsitsikamma mountains. The aim of those is to try and identify population fluctuations in relation to fruiting and flowering patterns at the local landscape level, as we still don't know how the birds are using the resources in this dynamic part of the world – low on rain, but big on variety. Point counts have not always proceeded that smoothly – on one transect line into Antoniesberg (a small mountain range that could be regarded as an extension of the Swartberg, connecting those more well-known mountains to the Baviaansberg) I misread the terrain and got bogged down in mud.

All alone and with no cell-phone reception, those situations can be a bit scary. With no other option, all alone I had to dig out the mud around the tires with my hands, pack in rocks, and after about an hour and a half of that I managed to rev free and back-track my way back to safety. While the Suzuki Jimney is in my mind the best value 4x4 out there, a diff-lock would be a very useful feature for those truly sticky situations. 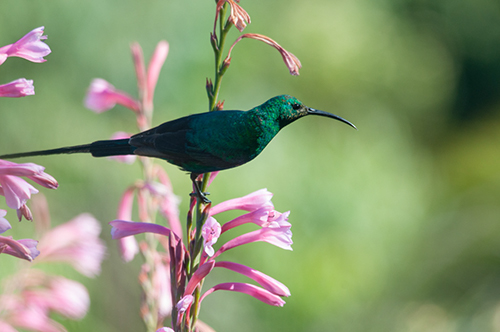 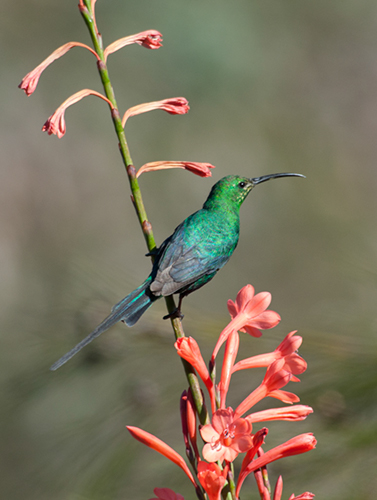