Orange-breasted Sunbird: The Bold and the Beautiful 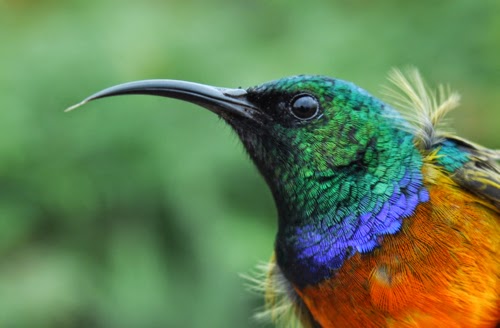 You know you're in the Fynbos once you hear the distinctive tseu tseu, a noise a bit like that a child would make to imitate the laser guns from Star Wars. And watching them darting around the proteas I can't help feeling they are playing, rather than engaged in the eternal fight for life. 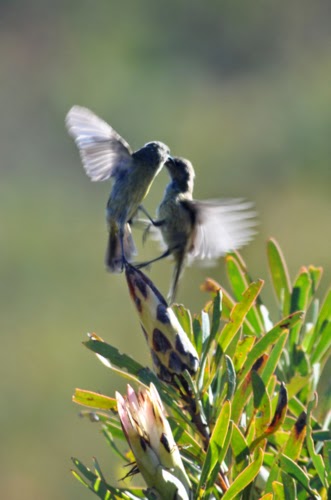 The following is the text of a pro-bona article penned for the most recent issue of African Birdlife:

Its not hard to see why this bird is described as beautiful – the male is the most distinctive and gorgeous of the sunbirds in southern Africa. This bird has brought numerous tourists to South Africa, and so it has a pivotal role to play in supporting not just the multi-million rand avitourism industry, but tourism to South Africa in general. As such, it is important not only for biodiversity functioning (through its role as the key pollinator for numerous red and long-corolla erica species), but also for our economy.

So clearly the bird is beautiful from various view-points, but why is it also 'bold'? Field observations of flight initiation distances (a bird's 'comfort zone') show that this is the least skittish of all our Fynbos endemic bird species. Even birds in remote areas will let one approach to within a few meters before taking flight to safer distances. It is also very curious, and it is not uncommon for young birds to approach human observers to almost touching distance.

Perhaps for these two reasons this is the most uploaded of the six Fynbos endemic bird species onto the photo sharing website Flikr so far this year, although there is a clear sex bias, with photos of males outranking females over ten to one.

Ecologically, this seems to be a fairly resilient species – it can be abundant in certain Fynbos habitats, survives on tiny unburnt fragments after a fire, it breeds from very young, has an extended breeding period, can double brood and so recovers populations fairly quickly after fires. Mostly associated with erica plant species, it also feeds from several widespread proteas and a variety of other flower types, as well as insects and spiders. As such, it is difficult to pin down exactly why this species hasn't spread further afield across South Africa, and a combination of food suitability and suitable climate may be the answers.


Research published nearly a decade ago suggested this species would soon be loosing large areas of suitable bioclimatic space, and SABAP data shows moderate decreases in both range and reporting rate between atlas periods – in comparison to the Amethyst Sunbird happily expanding its range across the Western Cape. While there is no need to panic yet, we all need to do our bit in order to ensure that this energetic mascot of the Fynbos will be able to continue working hard for us all well into the future. 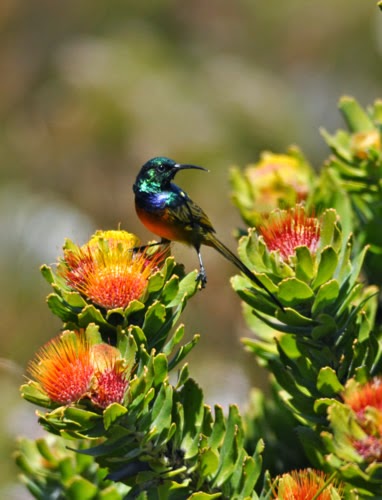