My children are super-heroes, is my conclusion after this latest weekend away to Nature’s Valley. First off, they WANTED to go camping, and they WANTED to see penguins. More impressively, they WANTED to go hiking through the forest. And not just any hike: Eli and Charlie had already impressed me last year when they energetically completed the Kalanderkloof forest-fynbos hike. This time, our mission was the Salt River estuary VIA Kalanderkloof and back through Nature’s Valley village. According to the trail map, that is something like 9km. If you’re going ‘meh’ at that distance, a reminder at this time to put this in context: Eli is 8 years old; and Charlie is tail end of 5.

Along the way we had to tackle the never-ending stairway; try and find the Leopard (or other predator) that the Vervet Monkeys could clearly see, voicing out there alarm calls from the safety of the trees; dodge the waves of the high tide along the cliffs of the bay; navigate fallen rocks and trees; an avenue of bumble-bees; and broken glass at a roadside picnic table. Of course, no problem for a family that had stood side by side to fight off the delinquent baboon that had casually walked right up to our campsite lunch table the day before, while we were sitting there, to try and steal our sandwiches. By the look of shock on the baboons face, he’d never seen such a united show of rage and defiance from mini-humans before. Camp chairs hurled like Thor’s hammer ensured we never saw that bothersome primate again, although screams from other campers suggested that we’d merely been a mild setback in that particular super-villain’s anarchic quest for carbohydrates.

Our journey had commenced the previous day, spurred by Charlie’s disappointment from our previous trip to Cape Agulhas. I’d tried to impress upon him the significance of our journey to the southernmost tip of Africa: that beyond this point lay only seas until the Antarctic ice with its penguins. The indignation of not seeing penguins is all the lad appeared to remember from that particular pilgrimage. As such, a public release of rescued penguins organized by Tenikwa and Nature’s Valley Trust ‘down-the-road’ at Plettenberg bay seemed like the perfect remedy for remaking happy feet.

The beach event was being coordinated by real-life super hero Dr Mark Brown, who has wielded his powers for good through Nature’s Valley Trust conservation, research and public outreach initiatives. His super powers include vision, confidence, charisma, and energy; key ingredients for great leadership; and the planet is lucky to have him on her side. Certainly, the power to positively engage with people that inspires a legion of volunteers must be acknowledged to be one of the greatest super powers there is.

It was a perfect day for the beach: warm and sunny, with winter perhaps hiding from the onslaught of climate change. After watching the newly cleaned mini-flock of African Penguins waddle down to the sea and into the waves of freedom to the soundtrack of a symphony of hope, it was time to continue our own more modest quest. But a warm and sunny day? Sounds like good weather for snakes… and as it was our path would lead us past the Lawnwood Snake Sanctuary, a garden-route tourist destination I’d never explored before. Of course, snakes tend to be associated with villains in stories of super heros…

At Lawnwood we were greeted warmly by owner Michael Caithness, who introduced us to his crocodiles, before setting us off on our guided tour with Wilmore. I’m generally fairly critical of animal collections that may be personal zoos, but collections that help to educate are worthwhile, especially for that class of maligned creatures, the snakes. It would have been difficult to gauge the efficacy of the tour should it have been for my children alone, who were quick to accept offers to kiss and handle the snakes given their wilderness background. However, a couple with their daughter from Germany were a perfect example of how effective this tour is at getting people familiar and comfortable with snakes. The mother had never even seen a snake before, and the daughter was also extremely skeptical during the initial encounter with a Brown House snake. However, by the end, Wilmore’s enthusiasm had won her over and she was quite happy to have a Red-tailed Boa wrapped around her shoulders. A successful conversion to the cause of snakes, and kudos to the efforts of the Lawnwood Snake Sanctuary. I have to say I’m envious that Michael and his wife Emily are able to make a living from their passion; your friendly neighbourhood Snakeman and SnakeWoman.

Well, that wraps up our most recent whirlwind one night stay in Nature’s Valley: but more to come in the upcoming bird atlassing tour of South Africa, from south to north. 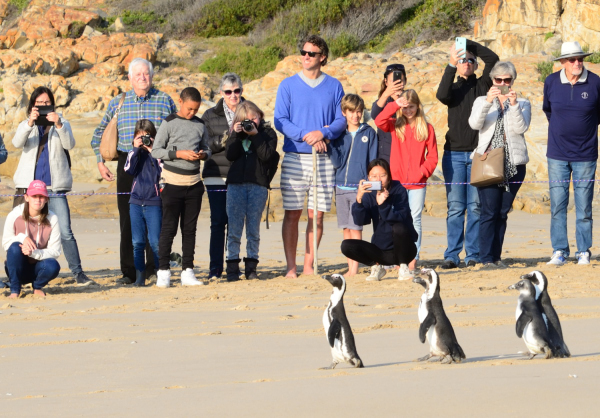 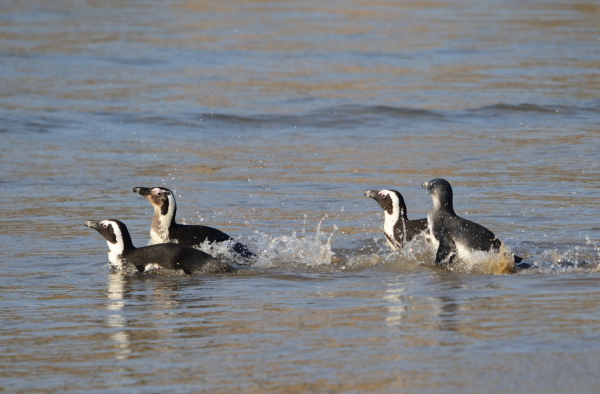 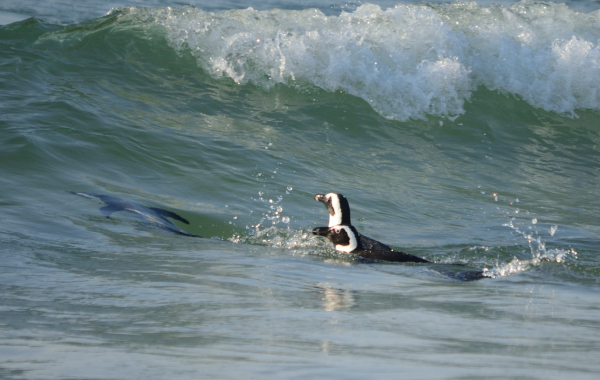 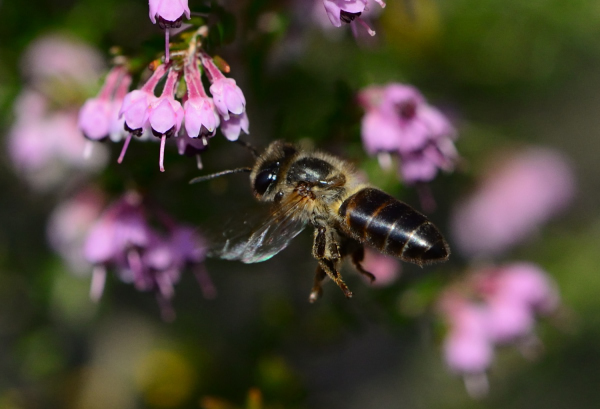 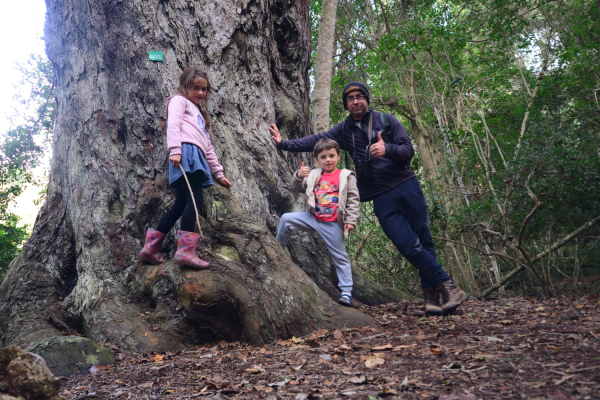 Winter in Lang Elsie’s Kraal campsite is beautiful, with aloes of various species in flower all over the place. The nearby Breede River was flowing strongly, with good winter rains so far. The canola and wheat fields surrounding this last remaining patch of Renosterveld were lurid green and brilliant yellow. Despite a few passing showers, the weather was sunny and pleasant. If well prepared with a warm hot water bottle that can easily be filled at the camp’s Kwikhot water dispenser, winter camping is nothing to fear: you’ll get a quiet campsite, and another highlight was we saw only two mosquitos during our 3-night stay.

Bird life was abundant and the resident birds were ridiculously tame. Flocks of weavers gathered in the acacias around the camp in the morning to take a break from raiding aloes inflorescences. A pair of Cape Robin Chats were frequently underfoot. European Starling’s did a great job of imitating Barn Owls, but like the camp birds, you soon stop getting excited by them. I put down a Klaas’s Cuckoo call to their imitations, not expecting one to be around or calling in the middle of winter, until actually spotting this glittering gem of a bird.

After our lengthy drive from Blue Hill Nature Reserve on the other side of Uniondale, always longer than the Google Maps estimated drive time with children of 8 and 5 in the back seat, we got an ideal camp spot, the surrounding trees would provide a great wind break from the occasional driving westerly winds. We packed our first full day to the max. After rains during the night kept me up mostly out of concern for getting soaked in our canvas tent, we woke up relatively late at 7:30. Good news is the tent is 99% water proof: but that means 1 drop in a hundred did makes it way through, which turns out to be a sufficiently annoying amount. Our day started with a walk around the Aloe Trail, at Charlie’s request. Highlights for the children included the small wooden bridge over the first gulley, the many flowering Oxalis, the story of Lang Elsie on the board near the historic kraal site, and the walk along the river-side forest trail through the tunnel of trees, one of which had a patch of army worms resting on the trunk.

The mission of the day would be to get Charlie to Cape Agulhas and the southern-most tip of Africa, about an hour and half drive south. Since I had never been to De Mond Nature Reserve, we decided to pull in there over lunch time to see the legendary flocks of terns. The river mouth is quite a long walk from the car park (1.5 km or more), and I didn’t log any terns while I was there, although Kelp Gulls harassing a Fish Eagle certainly was a memorable event, as Greater Flamingos erupted in panic from the combat in the sky.

The drive through the agricultural lands at this time of year are an ornithological feast, filled with large and easy to spot birds like Sacred Ibis, Spur-winged Goose, Helmeted Guineafowl and Blue Crane. By comparison, Charlie and Eli were mostly disappointed with Cape Agulhas, mostly my fault because I’d told them that beyond that was Antarctica, land of ice and penguins. Charlie was not impressed by the lack of penguins, and our limited time slot of 5 minutes to play on the stony beach. I have to say that the map of Africa close to the iconic beacon is really amazing: well done to whoever did that.

Then it was the jaunt back through Bredasdorp and back to the campsite by 5pm: a full day out, with just enough daylight left to prepare dinner and have a warm shower, before turning in early to catch up sleep lost the previous night, under the watchful eye of the camp’s resident genet.

With so much still to do, we decided to book a 3rd nights stay, giving us another full day in the area. We started that off with a relaxing drive around the long loop, where the low renosterveld and fynbos allows for very easy wildlife spotting. Bontebok had already been ticked off at the campsite, but Red Hartebeest, Mountain Zebra, Reedbuck, Grey Rhebok followed in quick succession with bonus points for a pair of Secretarybirds: South Africa’s current bird of the year. Beautiful fields of Ericas formed an amazing foreground against the dark slopes of the Langeberg Mountains and Marloth Nature Reserve, and it was here we would spend our afternoon. As the northern section of the pentad (bird atlassing area) includes the lower slopes of these mountains, I was keen to head there to pick up Fynbos birds missing from Bontebok NP.

With a gale force westerly wind having picked up over the morning, we chose to do the relatively short but steep hike up to the Duiwelsbos waterfall. The picnic spot at the base of this trail was an ideal lunch stop, nestled among tall Protea aurea, with hyperactive Cape Sugarbirds on their non-stop sugar rush providing visual and aural entertainment. Setting off up the gulley, the Afromontane forest shielded us beautifully from the wind. Arum Lilies sheltered along the banks of the stream. Signing out after the walk we were almost blown away, and although expecting our campsite to be a disaster zone, found the magic of Lang Elsie had protected our tent while we were away.

Of course, a highlight of any camping trip are children of the other campers. Charlie and Eli connected quickly with a trio from Belgium for the remainder of the afternoon, having great fun with stick insects and spiders along the river edge, a shared joy of nature overcoming the lack of a shared language. After early braai boerewors rolls, we explored local sections of the nearby trails by torchlight, finding a Fiery-necked Nightjar and countless spiders, but sadly, no Caracal. Certainly, one of the reasons this is a fantastic child friendly park is the lack of dangerous animals and easy to access walking trails: long game drives with too much energy in the back seat are never fun.

A third full day could easily have been filled with a trip to De Hoop Nature Reserve, but alas, the school bell was warming up in Uniondale getting ready to summon all for the next school term.

We booked 2 nights online via the sanparks website, and our third night at the reception, which costs a bit more than booking online.

The camping ablution block is modern, clean, and well kept. There are 3 double-hot plates in the kitchen, a microwave, and my all-time favourite appliance – the Instant Hot Water dispenser. The log cabins face west towards the Breede River, and are smartly done. The access roads are in good condition, as are the trails. It was sad that two of the trails were closed: but I’m not sure we could have fitted them in time-wise. Overall, an easy, affordable and pleasant experience. 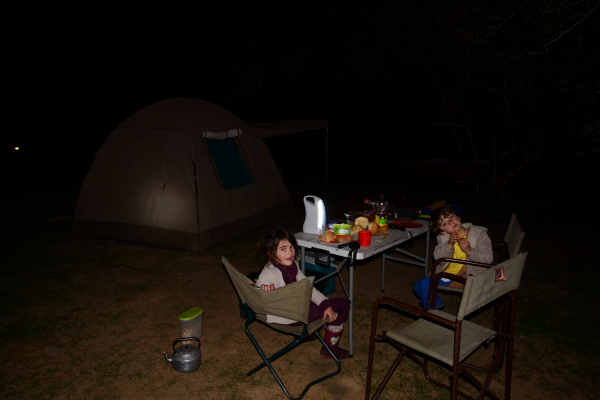 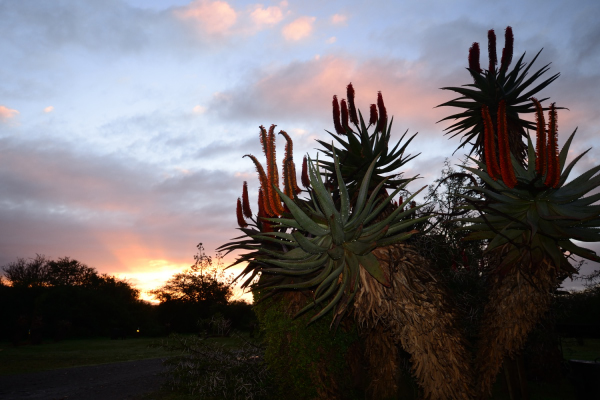 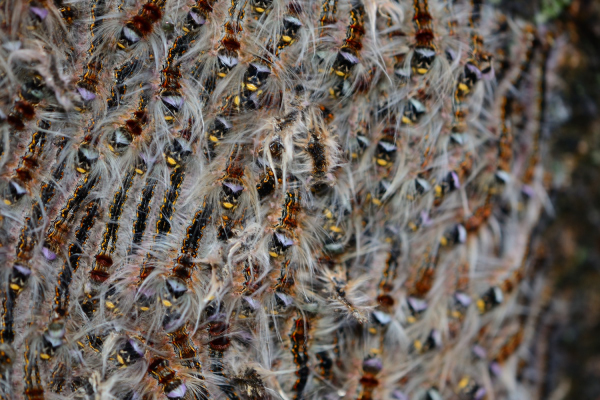 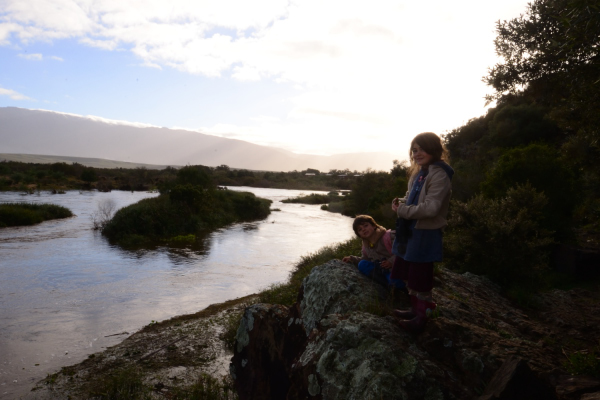 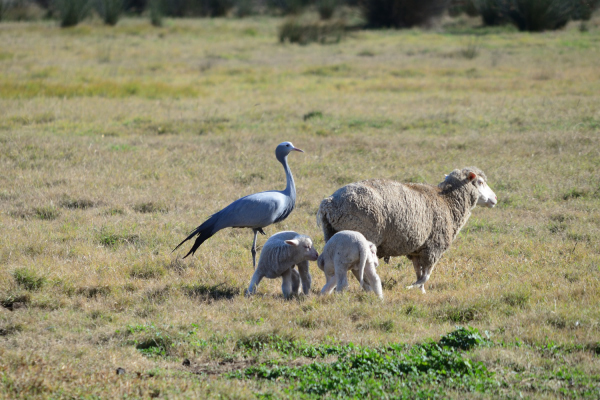 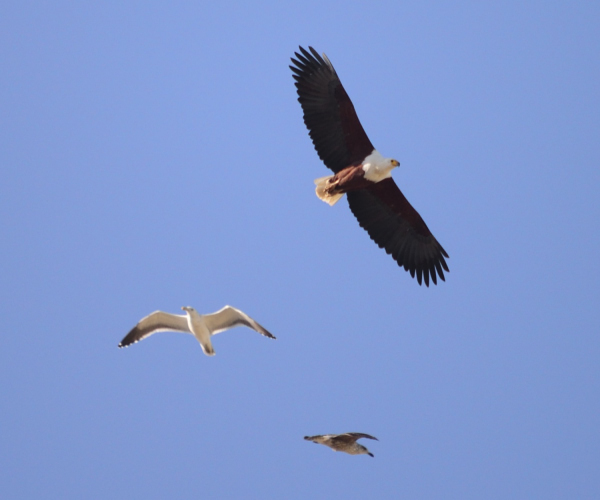 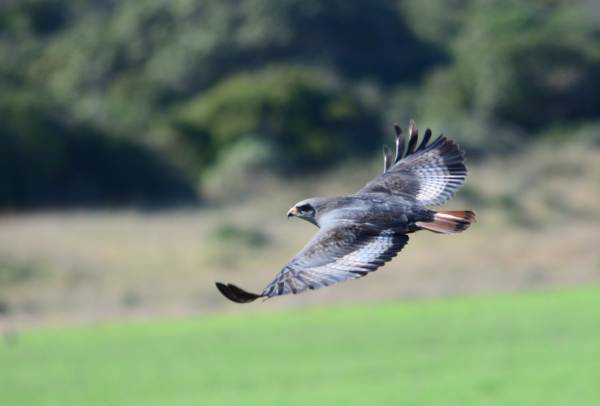 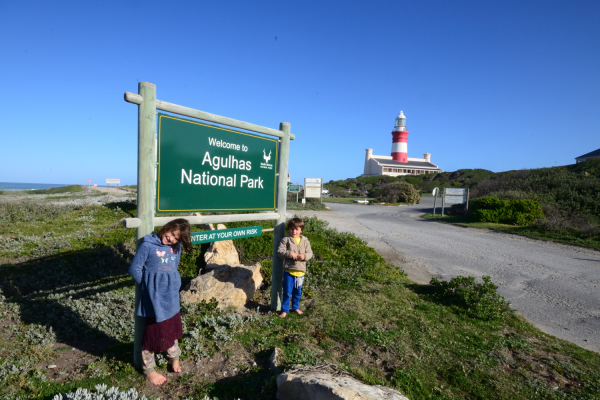 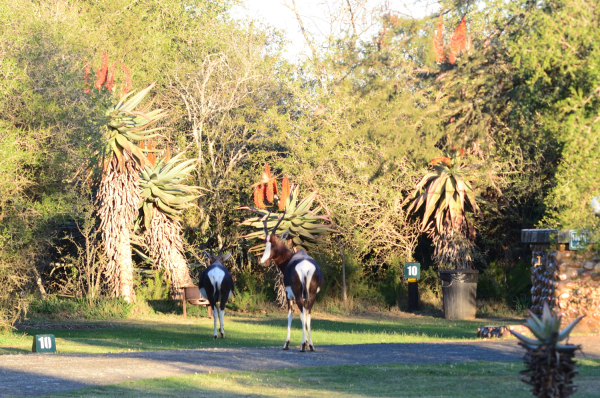 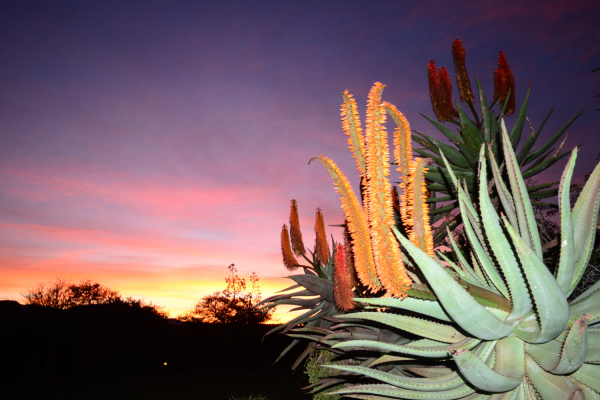 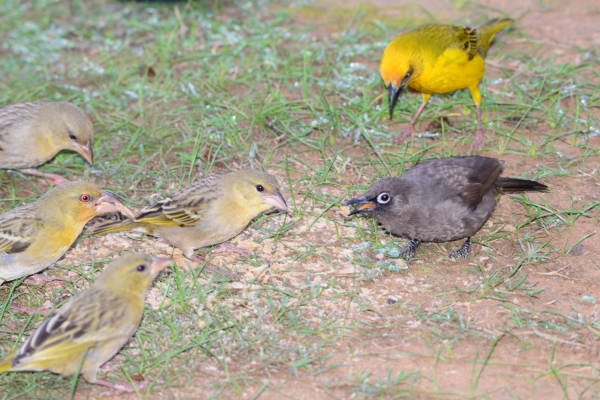 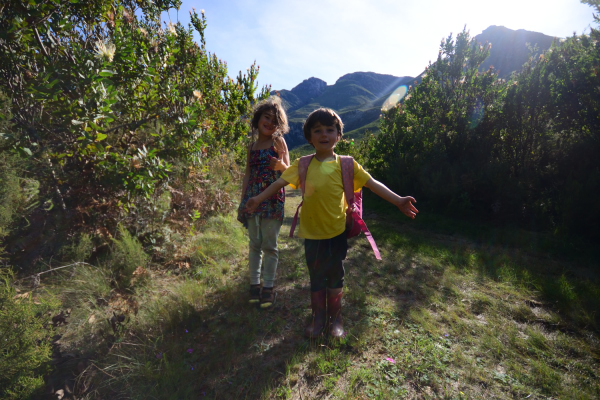 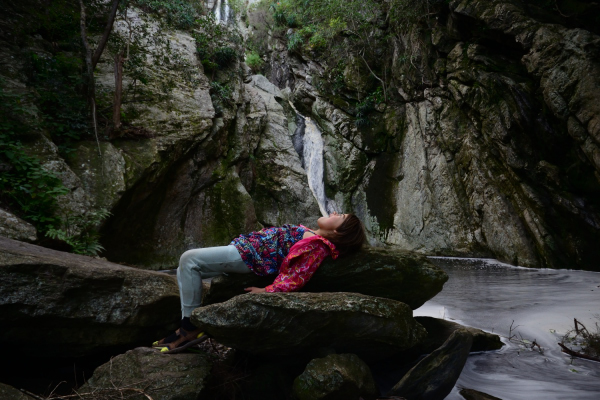