After the Fitz AGM at the beginning of the month (where Peter Ryan said I gave the best talk, yay!) it was back to Blue Hill with Campbell Fleming.

Campbell is just starting his MSc on the topic of the genetics of Cape Sugarbirds. 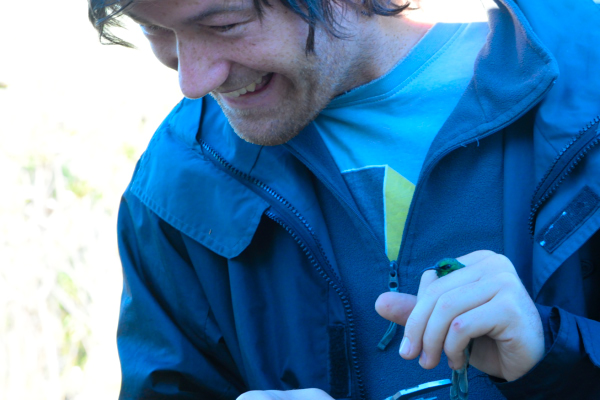 Basically, we've been interested for a long time on the connectivity of the populations of sugarbirds and other endemics across the biome. The fynbos is a fire driven ecosystem and the birds are very niche specific in what they like: sugarbirds can be abundant in old fynbos, but are absent from young fynbos where the proteas have not yet had a chance to flower. How do the birds deal with this and what are the consequences on their genetics? Are the birds on isolated fynbos mountains e.g. Kammanassie, different from other populations? Are populations being influenced by things we cannot see: e.g. parasites or genetic depression?

In order to answer these questions, we need DNA samples from all over the fynbos biome. Ideally, from several individuals from several sites. I've been collecting samples on an ad-hoc basis over the last year, but with rockjumper and buttonquail demanding a lot of attention, I've never had time to focus on this dynamic set of questions. I'd initially included this study direction in my last research proposal after conversations with Jaqui Bishop, a senior lecturer at UCT, in 2014.

Luckily for me, Phoebe Barnard secured some money to undertake this project at the masters level, and Jaqui Bishop found Campbell to do it. All of this is being supervised by Peter Ryan at the Fitz.

This kind-of relegates me to the role of bird catcher – but I'm fine with that! As you'll see, these 2 weeks took me to some pretty cool places, and I don't have to worry about lab work!

Our week started on the first Sunday of the month, 3 April, and although it was Elena's birthday she agreed to come out with us in the afternoon to help us set up nets. Campbell was after all pretty new at this and needed some help from someone who'd just turned 5! We got off to a good start, with our first birds netted. And so it went...

Monday morning saw a big haul in the Protea repens stands of a range of nectarivores dominated by young Malachite Sunbirds. But we could not stay... we were planning on joining Mark Brown for one of his regular sessions at Nature's Valley. So off we set to Wildspirit Backpackers! Here also we rendezvoused with Carolynne Geary who'd kindly agreed to help us with the setting up of nets, taking down of nets, entering data etc that all goes with the job. 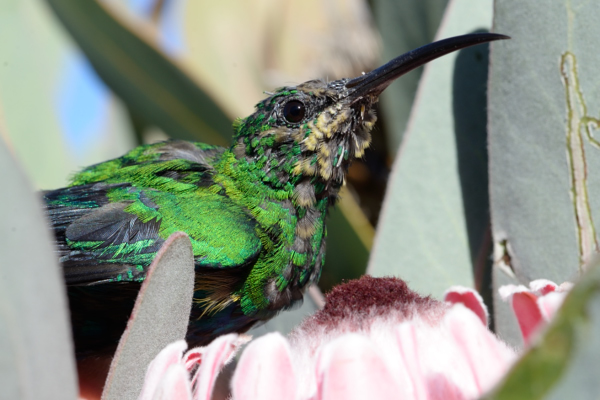 Little did we know that due to an inclemental weather report Mark Brown's session had been cancelled! We found that out on arriving at the rather damp hippy resort that would be home for the next two nights.

Nevertheless, Tuesday morning we decided to get at it anyway, and were rewarded with an acceptable array of birds, this time dominated by Southern Double-Collared Sunbirds. But sugarbirds were few. Daniel Cloete, PhD student looking at pollination affiliations here, had given us some pointers as to where we might find more, and we went to scout out the locations that afternoon: only to be drenched in the process. 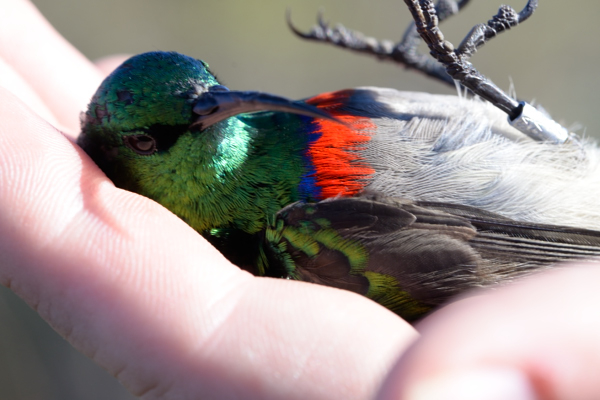 On Wednesday Campbell and I decided to lure some sugarbirds from a patch of fynbos near the backpackers, joined by one of the least hippy backpacker lodgers – an accountant from Germany. Meanwhile, Carolynne had volunteered to mission out to van Staden's where Ben Smit and Jerry Mokgatla were ringing. But again we were low on samples! I think Mark Brown has been training them to be illusive around here :) and so he kindly offered to assist sampling for the rest of the year.

Campbell's team had to move on: I'd over optimistically arranged a ringing session on the Montagu Pass for the Thursday. At least we'd be staying at some up-market accommodation, which was sorely needed as the outdoor shower in the rain had not attracted many users at WildSpirit. Not only that, but Over-The-Mountain also has a cute little restaurant which allowed Carolynne to top up on chocolate cake.

But Thursday was a bit of a black day. The start was late, skies were clear and wind started early. By the time the CapeNature rangers joined us we were ready to close the nets. However, they would let us into a little secret: the wonders of Camferskloof – a paradise of fynbos hidden beyond the hops farms off the Montagu Pass. But... it would have to wait, because again Campbell and I had a scheduled visit: this time Gamkaberg, to see if there were Proteas in bloom and sugarbirds present.

So that afternoon we negotiated the 4x4 trail up the mountain, to find that the Protea repens were in bloom near Oukraal overnight hut, plus sugarbirds and other sunbirds were evident. However, our accommodation was at the base of the mountain, so after setting up some net locations we had to negotiate the rough 4x4 track back down! The researcher accommodation at Gamkaberg is pretty cool – but we'd only be able to catch a few hours sleep before yet again ascending the mountain. Shew. Exhausting. And it would turn out that all that for just 1 sugarbird!

Time to head back to Blue Hill! Although I'd envisaged a day of rest.... Campbell and Carolynne had other plans, and Sunday morning we were netting again! But again clear skies and a stiff breeze so now only 2 sugarbirds! We'd been planning on camping in Welbedacht over the next couple of days, but on the drive back from Gamkaberg we noticed the mountain was on fire. A later inspection would reveal no ancient fynbos left :(. We had to make alternative plans so... 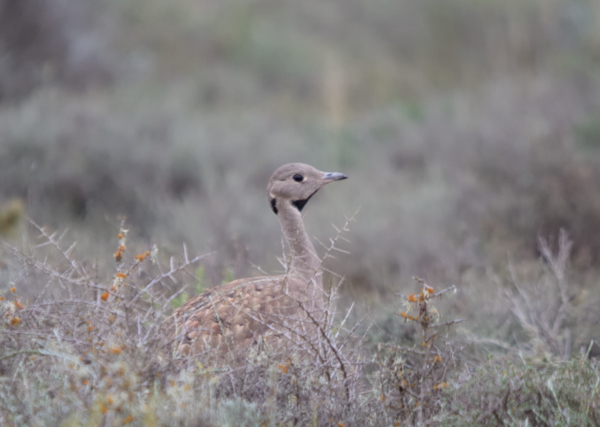 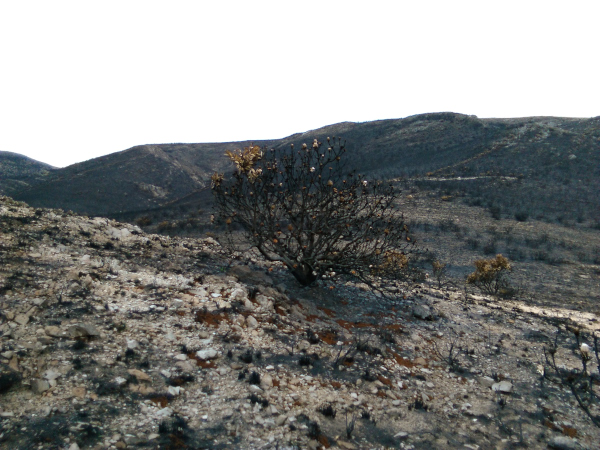 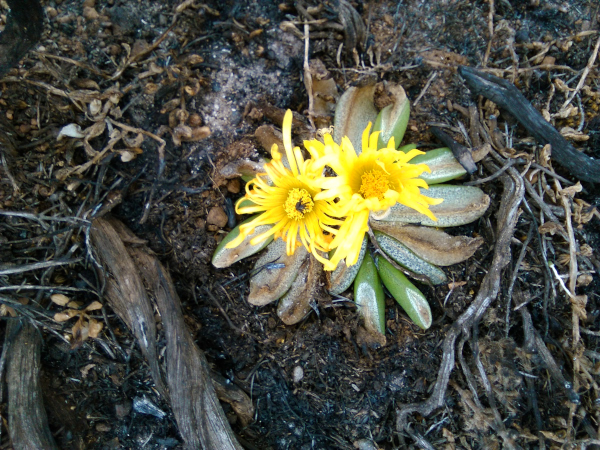 Monday and we were trying our luck on our neighbours farm, but again low capture rates were the theme of the day. At this rate it would take Campbell 100 days of capture just to get his sample of sugarbirds!

Monday saw the arrival of ringers Gert and Koetie Opperman, and with them, a change in luck. They had come to Blue Hill to add the fynbos endemic species to their life lists. Two more mornings with them at locations on Blue Hill saw us reach our goals on Orange-breasted Sunbird. And then we were off to Camferskloof, again. 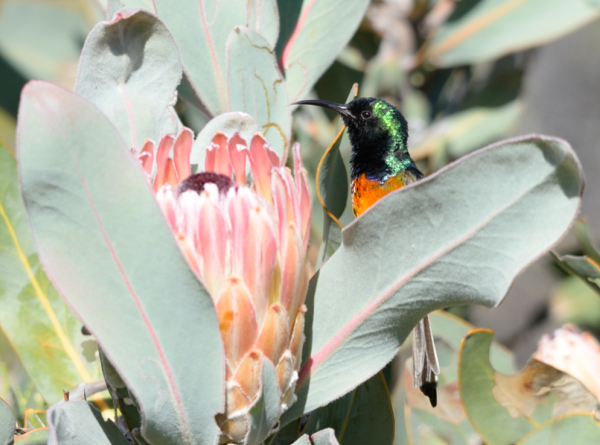 OT, Outeniqua CapeNature manager, had allowed us to stay at the hikers hut, which is in a state of reconstruction. But it was close to our netting site: and Thursday morning saw us inundated with birds: we had to release many more birds than we would be able to process, and certainly cracked our target for birds for this neck of the woods.


And as before, then it was Gamkaberg, where this time Tom Barry had helped us organise accommodation at Oukraal, so we would not have to drive the 4x4 route up and down. At Oukraal Tom had also organised for his interns to help out, and so we had company of Nelly and Kirsty in taking data and checking the nets. While our first morning was somewhat subdued as we had set up around the hikers hut, Saturday morning saw us again easily reach our targets with some well placed nets in Protea nerifolia. 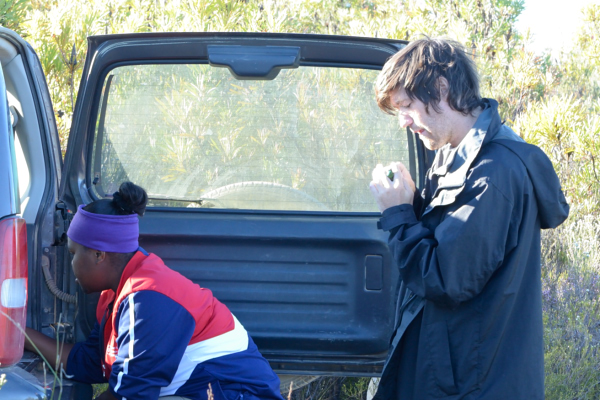 But the week was not finished. Saturday night we spent at the Takkieskloof campsite in Riversdal, with a productive Sunday morning, called short by rain. And a shortage of equipment. Sunday afternoon we begged a few extra sample bottles from the Riversdal hospital, and filled those on the Monday morning, with the help of Zoe Woodgate for data entry (and Campbell's lift to Cape Town).


It's taken me most of the week to recover from that expedition: but all in all, we'll call it a success.