Rabbiting on about a Hare-y experience.

While picking up a volunteer at 1am in the morning the other day, we were lucky enough to not only see 3 young bat eared foxes, but also a Smith's Rock Rabbit (Pronolagus rupestris). This is only the second time we have seen one. Like most rabbits, it became dazzled by the headlights of the car. We of course slowed down to avoid it and I was lucky enough to have my camera and get this photo. Note the red tail, a distinctive feature of this group of rabbits (apparently they are indistinguishable in the field from the other types of Rock Rabbit, so we are saying it is a Smith's Rock Rabbit based on the range). 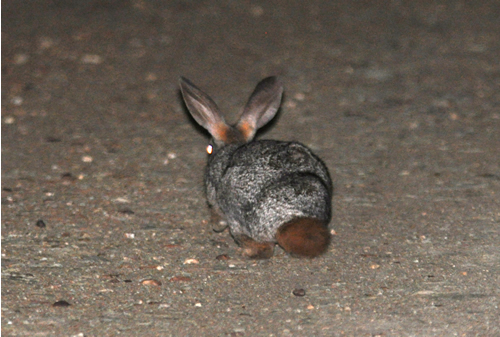 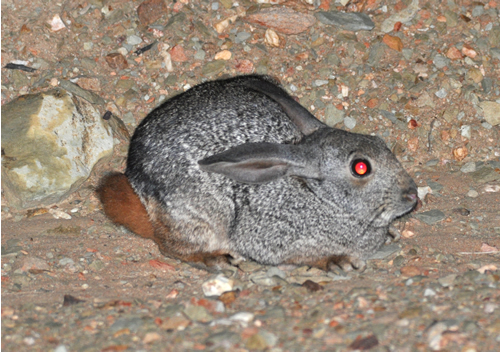 Normally along the roads one sees Cape Hares (Lepus capensis). One of the field characteristics to tell them apart from Scrub Hares (Lepus saxatillis), the dominant hare across the subregion, is that the Cape Hare runs around with it's ears up, while the Scrub Hare lays them across its back when it runs. Based on that criteria, we have not seen any Scrub Hare in the area, although the range maps in the books say they occur all across the southern African subregion. Apparently most but not all Scrub Hares have a white forehead spot and hair on their feet, but try spotting those features in the field. 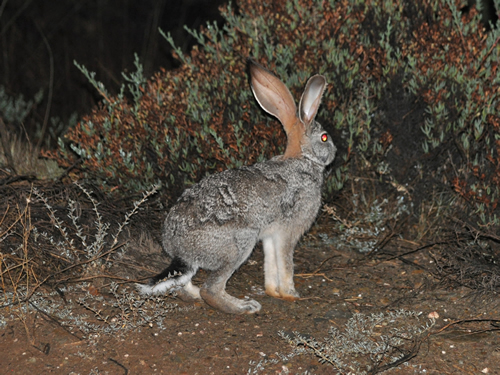