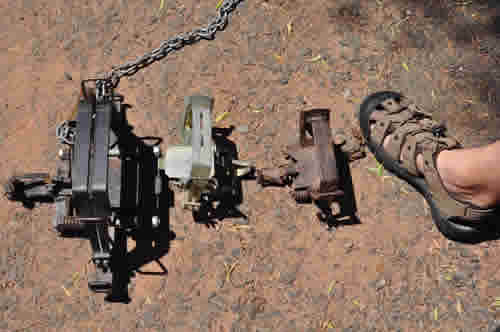 You are probably thinking 'That black one on the left is clearly illegal – huge, nasty looking thing. Not so sure about the one in the middle, but that one on the right is small and looks the least threatening'. You're probably also thinking 'I wouldn't want to have my foot stuck in any of them!'
The answer surprises most people – the smallest trap on the far right is the only trap that by legal definition is illegal. Why? 'Soft traps' are legal as long as there is a 'gap' in between the clamps. Clearly that is a sick joke – the gap in these traps is less than a centimeter. If you were caught in the big black trap you would be in severe trouble – I was unable to set it using my hands alone as the springs are so strong. It needs to be set by standing on the levers, while presumably someone else puts the latch in place.
In civilised countries these sorts of traps have been banned. Unfortunately, they are in common use in South Africa. Once they are set, they are often not checked for days. Anything unlucky enough to be caught will be in agony until such time they either starve or die of thirst, or are lucky enough to be dispatched by a rock (why spend a bullet when you can use a free rock?). Unfortunately it will be a while until legislation is reviewed again, and there is little public action against them.