It's not unusual to find a duiker or grysbok in the cage set to catch the Baviaans-West male Leopard. Today we got a first – a Cape Clawless Otter. On a routine check of the cage today, as I was approaching the vicinity of the cage, a Dassie (Rock Hyrax) barked from the cliffs above me. It is very unusual for Dassies to bark at people – barking is normally elicited by Eagles. On one occasion when I had been walking up a valley, Dassies had been barking all the way – and at the end of the valley I flushed an Otter from the stream.
However, I was still some-what surprised to see an otter in the cage. During over a year's worth of camera trap activity, we have not obtained a photo of an otter (despite on one occasion tracks passing in front of a camera!). Otter have also been implicated in the loss of our family of geese over a year ago. So this otter must have a very large territory – I'm unable to comment as little is known about them. 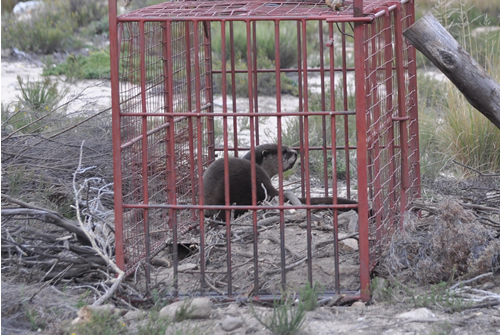 Anyway – since we have no photo of an otter, I decided to go back to the house and assemble the family as camera crew in order to get an 'otter in action' photo. So Chris, Elaine and myself drove back to the cage, positioned the vehicle, Elaine with her pocket cam, and I set up a 400mm camera for Chris – ready to shoot. I then took my own camera and approached the cage, shooting all the way. Generally any animal caught in a cage is panicking by this stage, so my aim is to open the cage door as quickly as possible.
I opened the cage and the otter raced for freedom.
“Did you get the shot!?” I asked the faces from the windows.
“No - I was busy fixing the settings.” said Chris.
“F***!”
<insert here an action photo of an otter that could have been taken had someone not been fiddling with the camera settings>
Still, an exciting event and a rare viewing. I've seen European Otter in Scotland, Spotted-necked Otter in the Okavango, Neotropica Otter and Giant Otter in Peru. One thing that stood out about the Cape Clawless was how when it bounded off the tail flopped crazily up and down as though it was simply pinned on. Most other otters seem a bit more graceful.
As for the Leopards, we have now downloaded the first GPS data of the female that was collared a month ago. She has a territory that is around 20km long and about 10km wide at its widest point. However, I will not be publishing the range map here as distribution of this information has been used by hunters to target individuals. As for the male – we hope he is doing okay as we have not had a photo on the camera traps since January. Until such time as he is caught and the valuable data downloaded from his collar, the cage remains active – much to the annoyance of the other wildlife residents of Blue Hill Escape.