Owl on the wire

“Stop! There's an owl on the wire!” I shouted as Chris and I drove back from a Gouritz Initiative meeting in Oudtshoorn. My first impression of the tangled body was that it had been hit by a car or shot and placed trophy-style on the fence between road and farmland. On closer inspection though, it was clear that a more likely scenario was that an unfortunate strike on the fence had hitched a barb through the elbow joint of the bird – the wing was a mess – shredded down to the shoulder - and feathers downwind on the ground indicated a struggle. The eyes still were still bright – it had done all it could to be free. 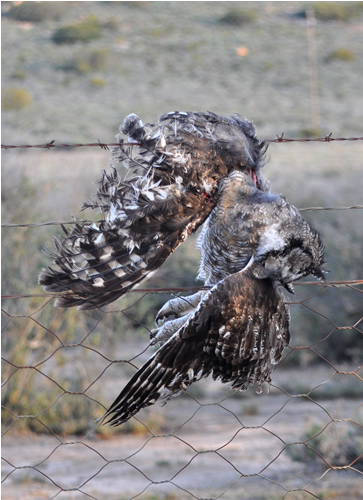 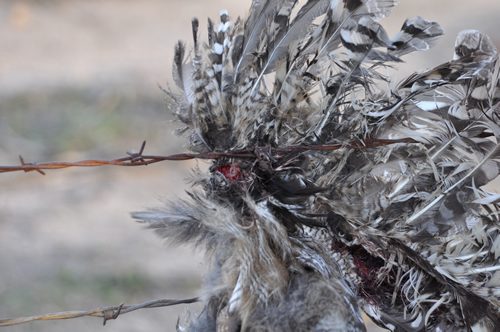 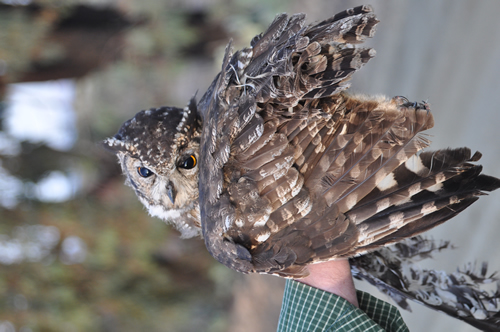 A 1990 Wilson Bulletin review of bird deaths on fences suggests that overall fences cause a small proportion of bird deaths compared to hunting and other causes of mortality although some species such as Whooping Crane and Capercaillie are more at risk. Small comfort for this Spotted Eagle-Owl that must have suffered for hours before succumbing to exhaustion. I've also seen Grey-winged Francolin crashing into fences.
In the 1960s, Leonard Cohen lived on a Greek island with his girlfriend Marianne. In an effort to help him out of a bought of depression she handed him his guitar, whereupon he began composing "Bird on the Wire" – inspired by a bird sitting on one of the recently installed phone wires (according to Wikipedia). Had he seen this bird on a the wire, he would surely only have gone even further down the spiral.
And I swear by this song,
And all I've done wrong,
That I'll make it all up to thee...