Long time in the Langeberg

The title is a bit of a pun – lang is long - in case you don't speak Afrikaans. Still.... it was 5 days without a shower. The Langeberg Mountain Range is a 170km long range about half way between us (Blue Hill) and Cape Town. It stretches from around Swellendam to past Riversdale in the east. The open plains of the Little Karoo border the north of the mountain range, while to the south lie the rolling Agulhas plains.
On Monday I set off to Wildcliff Nature Reserve north of Heidelberg (wildcliff.org). This is just under 1000 ha of mostly mountain fynbos, managed by leopard researcher Jeannine McManus. I wasn't there to discuss leopard though... but instead to meet my supervisor Phoebe Barnard. She was accompanied by Nigerian fynbos avifaunal researcher Zingfa Wala.
On Tuesday, after a bit of ringing, I had to shoot off to meet up with the Outramps CREW group. CREW standing for “Custodians of Rare and Endangered Wildflowers” and it's basically volunteer groups monitoring local plant species on the South African Red List of threatened species. Despite some sketchy directions, I managed to navigate the floral wonderland of the Rooiwaterspruit valley to make my first appointment with legendary Di Turner, hubby Bill and Ashleigh Harvey. Di Turner and her crew have discovered several new species, documented large tracts of the areas botany, and hiked many kilometers (on crutches!) to do so. 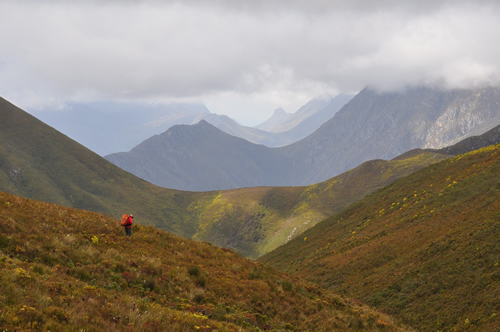 The next day, concerned about my borrowed vehicle on the side of the road, I backtracked down again and drove to Outol on the Garcia pass – a monument converted into an overnight hiking hut. It was then a strenuous long hike to reunite with the botanical wizards. However, views at the top were worth it, and under Ashley's guidance I began to try and absorb the torrent of floral information coming my way. By the end of the day we had climbed the legendary Sleeping Beauty, collected some rare Erica specimens, and hiked for over 10 hours. To recover, we all went to bed very early and slept for 10 hours as Thursday held another long trek.
This time into Kristaalkloof. Weather was slightly better – the intermittent rain of the previous day replaced by intermittent sunshine, so it was time to take lots of flower shots.

What is quite amazing is that the Sleeping Beauty / Kristaalkloof hikes cost R10 a day. And I've been unable to find any useful information, maps etc on the internet. However, this lack of marketing of this spectacular hike shows as there is little trail maintenance. Bookings have to be made through the Riversdale information services.
Friday – the race home for preparations for the Karoo to Coast cycle race...