It was transect time again today; and my destination was the Blue Hill boundary with the Baviaanskloof on the ridge of the Kouga mountains. This is one of my favourite routes as it is high – over 1400m for most of it, with views north to the Swartberg, west to the Kammanassie, and south to the Tsitsikamma mountains and there is always something to see. Its just usually not a snake, and especially not a boomslang as most of the vegetation up there has just turned one year old and, well, there are just no trees anywhere. Probably haven't been for many years!

It was a hot day. In fact, my first snake of the day was an unidentified colubrid hiding in the grass that I couldn't get a good photo of. But then as per usual I was distracted by birds or simply trying to find my way up the mountain slope over loose rocks and charred skeletal remains of proteas and the thought of snakes left my mind.

So the dry rasping and flash of yellow glimpsed out of the corner of my eye caught me by surprise, and I had to take a step back in a moment of nervous panic as the boomslang lifted itself off the ground like a cobra, only meters from me. I stood entranced as it swayed from side to side. It was almost as if it was the snake charmer and I was the snake. The big eyes, puffed up neck, darting tongue were mesmerising. Then I remembered my camera in my backpack and I managed these photos of its warning dance before it took shelter under a rock.

With these bright colours, it has to be a male. It was probably 1.5 meters long. Bites are rare – but with hemotoxic venom that stops the blood clotting and can result in internal bleeding, one doesn't want to get bitten as monovalent antivenom is hard to come by and treatment may involve total blood transfusions. 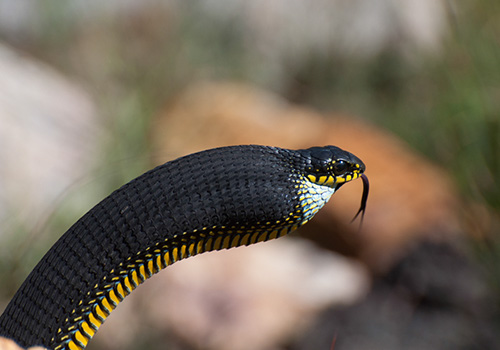 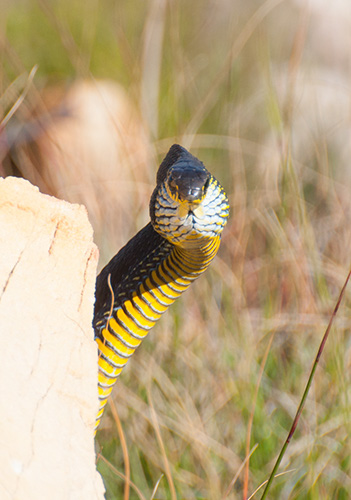 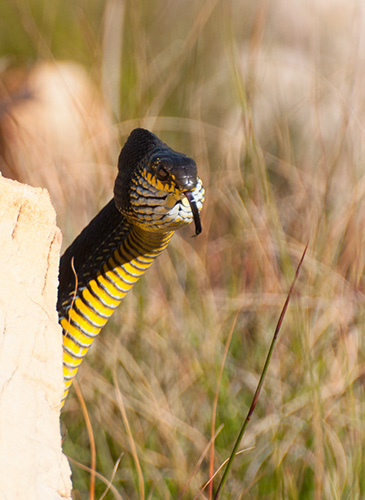 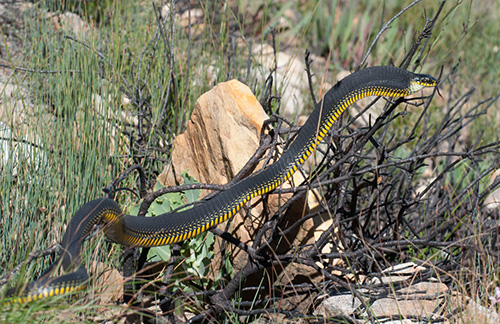