Sweet and Sour: me and my Meerkat, Chutney


December 2013: it was my last bird survey of the year; over 900 counts conducted. I’d surveyed this route near a small section of the Baviaanskloof Nature Reserve over ten times, found and documented the first Black Harrier nest in the region; and never seen a Meerkat.

It was just past Christmas, and I had spent some hours with a beautiful pair of Blue Cranes. Driving slowly on, I noticed something scampering rat-like down the track. I couldn’t believe it: a baby meerkat!

I got out the car and approached it. It stood its ground teeth bared and snarling ineffectively. Where had it come from? I pondered. The closest burrow I was aware of was more than 10km away. I’d been in the vicinity for hours and not seen a meerkat – and this was time spent searching for photographic opportunities. What was I to do? I didn’t have time or inclination to adopt orphaned animals: I am a hard biologist at heart. Or so I thought.

At that moment a pair of Black Crows took flight from a copse of gum trees not far off. The meerkat stopped snarling and limped towards me, looking more frightened by the circling of dark wings. I couldn’t believe it, and with that action he had decided his fate. I took off my jersey and picked him up.  He was limp in my hand, not-struggling. Exhausted and clearly on his last legs, and one other factor played a major decision to interfere with nature that day – Pauline Ruffenach.

Pauline was a volunteer helping me with my research. She had previously volunteered at an animal rescue sanctuary and mentioned that her favourite animals were meerkats. A meerkat asking for protection and someone to help it back onto its feet? Soon we were both on our way back to Blue Hill. Half an hour later and the baby meerkat was delivered into Pauline’s apricot covered hands. Anja and Pauline had been processing fruit in preparation for the next batch of home-made chutney.

“Here you go, a meerkat, look after it!” I said handing it over. And Pauline proceeded to do so adeptly, and we proceeded to learn a lot about meerkats. The first major hurdle was to see if we could get the meerkat through the night, the limp, feather-weight bundle didn’t inspire much hope, and I gave it 50-50 odds. Pauline was up all night with hot-water bottles, syringe and rehydration fluids. In the morning she greeted us with meerkat tucked between her bosoms.

Pauline decided to call it (it – because we didn’t know the sex yet) Chutney, because the meerkat had been delivered while she was making South Africa’s definitive curry accompaniment. Chutney soon showed that he had every intention of living. He would give his ‘nyeh nyeh  nyeh…’ begging call incessantly. He soon polished off my stock of meal-worms, taught us that he loved egg (but that gave him tummy problems), cucumber (but not tomato), apple (but not apricot), and grasshoppers and crickets (but not the red bugs that were rather prolific at the time). And that he hated being alone, from which we soon learnt his worry call, a high-pitched tremulous ‘mrr-mrr-mrr-mrr’. It’s that call I think that made the original folk who anointed these charismatic creatures their current common name. 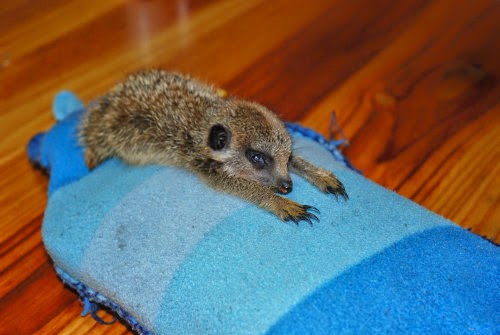 In an effort to learn more about meerkats, Anja and I watched Meerkat Manor. Both of us hated the artificial story pieced together from disjunt video clips, often featuring different meerkats as their ‘hero’ animals. Anyway, we learnt a bit: don’t bother with season 2. Okay, to be fair, we were reminded that meerkats are very social creatures and their family structures involved complicated hierarchies and coalitions of individuals. Their enigmatic smiles, big eyes and fascinating family interactions make them perfect human-adorable animals.

Chutney spent the first few months of his life as a girl. Baby meerkats do not have pronounced genitalia and boy-meerkat penis is rather negligible. Only at about six months did the first swelling of testes appear. The penis slowly became larger, and he began to take rather a fancy to girls with woolly socks, which were hugged rather suspiciously.

During the first months we had every intention of somehow releasing him back to the wild. So we spent a lot of time walking around with him, lifting stones so he could sniff out the creatures hidden beneath. We learnt that while we were good at catching grasshoppers, which Chutney loved eating, Chutney was not actually that good at finding them himself. Chutney also had no problem handling giant Rain Spiders. It was during one of our rock-turning exercises that we found our first big scorpion, a venomous Uroplectes. Just to be sure, for his first deadly snack we removed the sting – the poor scorpion never stood a chance. 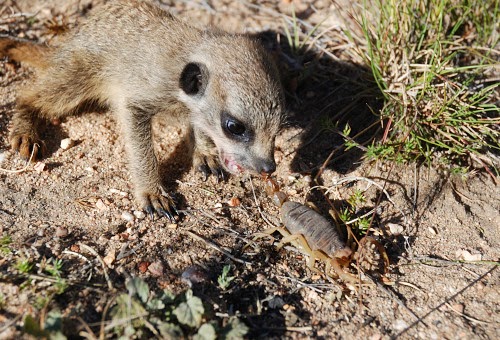 Soon Chutney was finding food for himself. But not spiders and scorpions. With their long front claws and incredible sense of smell meerkats are equipped to find buried insects. We were impressed when Chutney dug up his first lawn caterpillar. We were less impressed that with his new found digging skills he proceeded to dig up our baby carrots, loose tiles on the patio, and expose every weakness in the house. Later on in life he was observed to dig up a mouse and a mole.

One day on a walk we heard a different noise from the little meerkat. A slow, steady ‘brrr, brrr, brr’ from a crouched stance. Chutney was looking up into the sky, moving his head back and forth, pointing. We looked into the sky. Nothing! But Chutney continued, now and again looking around worried.  We looked more carefully. Amazingly I finally spotted a speck hundreds of meters up – a bird of prey! It was too far up for me to even distinguish if it was a Black Eagle or Jackal Buzzard. During almost all our walks that summer Chutney would point out some bird of prey to us. We had no idea Black Eagle and Jackal Buzzard were as common as they were, or how high up they normally flew.

As the months rolled quickly by, and summer turned to autumn and winter, at night Chutney would be assigned to a cage with a hot water bottle by the fire. He didn’t like being put to bed, but if we did not do this he would follow us around until we turned lights out, not wanting to be separated from the pack. However, he’d be falling asleep all the time and clearly suffering. During the day, he would habitually jump onto someone’s lap and have a nap. Failing that, he’d sometimes just curl up into a head-over-heels ball and power nap wherever. However, he was also starting to dig himself a burrow, and in spring he started spending his first nights out. By summer 2014 this was his regular habit.

Over time, ideas of a forced reintroduction faded. After all, we live on a nature reserve, he had free run of the place and was free to wonder off whenever he wished. However, it became clear that the houses and areas around them were his territory. He would later on realise when we were going on long walks and he’d turn around and head back home once we got too far. He’d become an extension of the family and would greet us with little bounces and upright tail when we returned from a day out.

Chutney was of course a big hit with most visitors, and he in return loved the attention. We’d realised early on that he needed to suss everyone out, he’d be friendly, but then try and assert his dominance, often during the course of play. Normally it required little effort to show him his place at the bottom of the hierarchy. However, his playful bites were becoming more serious, and he first drew blood from a visitor at about a year old. A sneaky bite to the ankle. We presumed it was a playful bite gone wrong, and we didn’t like the person anyway – so thought Chutney had sensed this in some way. 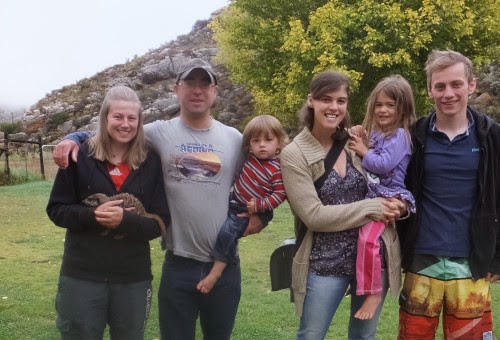 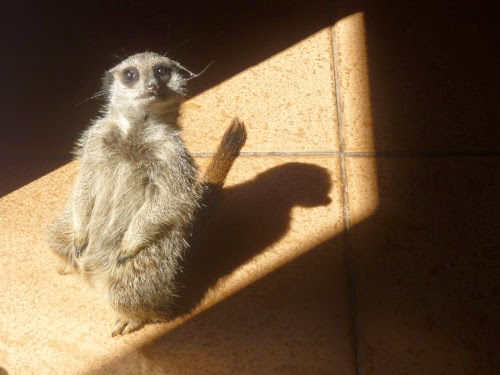 It was March 2015 that things all fell apart. Anja’s sister with her three kids had come over from Germany to visit. Samuel, the oldest, had been captivated by Chutney during previous skype sessions and was really looking forward to meeting the meerkat in real life. Chutney greeted them in his usual friendly manner, and the kids and meerkat started running around the garden. Next thing Samuel was screaming and Chutney was hanging from his thigh, teeth locked in and Anja had to detach Chutney from the 6 year olds leg. The damage was done, Samuel was now scared of Chutney, and Chutney could sense it. Later on, the kids were playing while Chutney was kept away and under supervision of the adults. His stance was aggressive, and suddenly he ran in and attacked the second oldest boy. It was horrifying, Chutney gripped the inside thigh and shook his head as though he was killing prey. 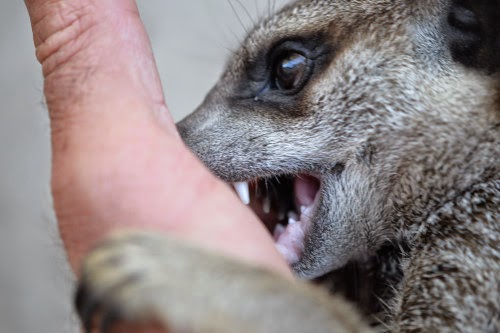 Both attacks left nasty wounds. Chutney spent the rest of their visit in his cage or in my office.
That event was a big shock for us. We’d never thought he would be a problem with kids, since he was fine with Charlie and Elena. But Chutney had learnt now how he could climb the dominance ladder. Later in the month he effected another attack on my aunt in her bed, climbing into her bed and latching onto her thigh totally unprovoked.

Mid April, Elena’s birthday party. It had been our intention to shut Chutney away, but Chutney had gone for a walk with a volunteer when the families and kids arrived. All the kids were well settled and playing when the volunteer and Chutney returned. The kids immediately ran to him and we were ready to grab him. But all seemed fine and the playing continued, with Chutney handed from kid to kid. It was an hour later when we heard the screams. Anja and I looked at each other: Chutney. Chutney was again latched on and savaging the eldest boy. By the time we’d removed the meerkat he’d delivered three nasty bites.

That was the last straw for us; Chutney had become a serious liability. With the constant turn-over of people, Chutney faced a future with us restricted to a cage or office. I did not want that. The day of the party we sent Chutney off with one of the neighboring families who had meerkats on the farm, and he now resides peacefully on a farm without children.

He is greatly missed by all of us: Elena says we must bring him and back and just not have visitors. Charlie continues to look down from his chair during meals for a scavenging meerkat on the floor. 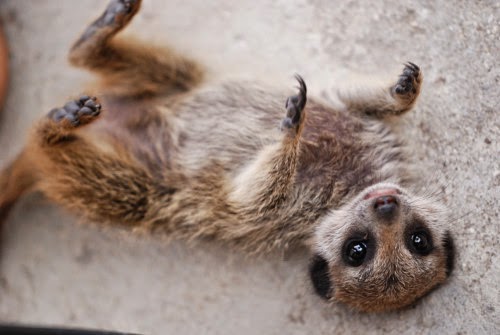 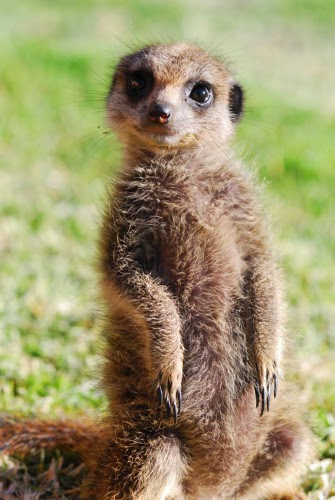 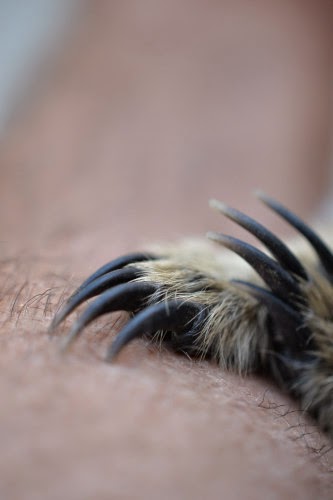 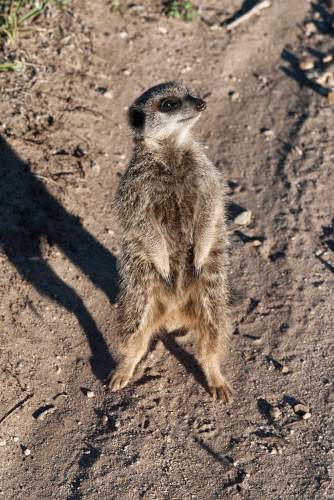 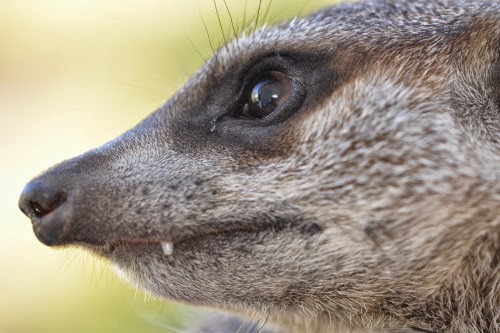 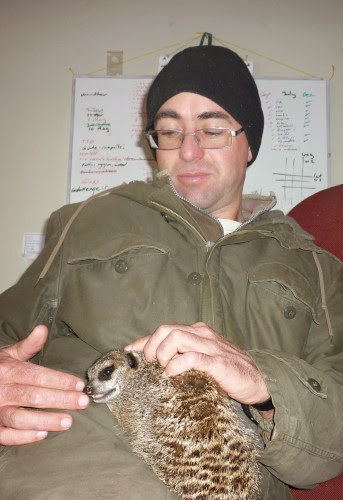